Brussels International Airport will partially operational on April 3 with new security controls, 12 days after it was attacked by suicide bombers.

The airport has not handled passenger flights since the attack on its departure hall claimed by the so-called Islamic State group.

The last month’s attacks on the airport and a metro station left 32 people dead.

Meanwhile, Belgian authorities charged a third suspect – named only as Y A – with terrorist offences linked to a plot to attack France. 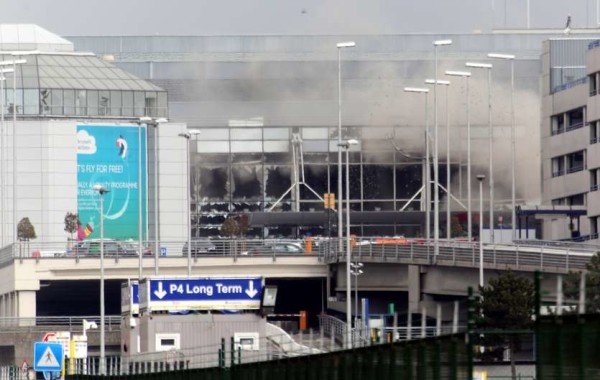 The charges come in the wake of the arrest of Frenchman Reda Kriket in a Paris suburb on March 24.

Arnaud Feist said he was expecting to receive official authorization for the reopening.

The first flight is expected to take off in the early afternoon for the Portuguese city of Faro. The others will be bound for the Greek capital Athens and Turin, Italy.

Passengers will only be able to get to the airport by car or taxi – the terminal is still closed to trains and buses.

Under the new security arrangements:

On April 1, Belgian officials reached a deal with police unions on enhanced security at the airport.

The dispute had delayed the reopening.

Arnaud Feist said he hoped the airport would get back up to full capacity in time for the start of the summer holidays at the end of June.

Brussels international airport will be closed until March 29, Belgian authorities say, following attacks in the capital that left 31 dead.

Zaventem airport was the first target on March 22, with two suicide bombers triggering explosions in the departures hall.

An hour later, 20 people died in the suicide bombing of a metro station.

On March 26, Belgian prosecutors announced that one arrested man had now been charged with terrorist offences.

ISIS has said it carried out both the Brussels attacks, and the ones in Paris, in which 130 people died in November 2015.

Brussels airport authorities said the “investigative work related to the judicial inquiry into the airport terminal has been completed” but that passenger activity could not resume before March 29. 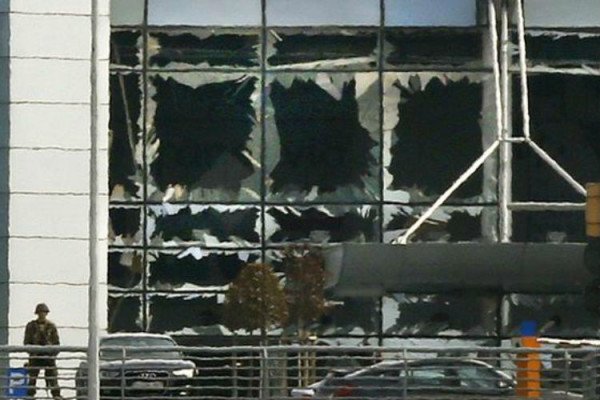 A team of airport engineers and technicians is being given access to the terminal building for the first time since the attack.

They will assess the damage and stability of the building. The airport authorities will also install new security measures.

Some people fleeing the first blast were caught by the second.

The two suicide bombers there have been identified by DNA as Najim Laachraoui and Brahim el-Bakraoui. They were pictured in an airport CCTV image before the explosions with a third man, on the right of the picture, who has yet to be identified or apprehended.

Brahim el-Bakraoui’s brother, Khalid, carried out the attack on the Maelbeek metro attack.

In Brussels, buses are running and most metro stations have reopened but there are still soldiers patrolling the streets and although people are defiant, they are aware that there are possibly still other suspects at large.

On March 26, Belgian police continued operations to search for members of the terror cell, in particular the missing man from the airport image and a man suspected of aiding the metro attack.

Twelve people were arrested on March 24 and 25 in police raids in Belgium, France and Germany.

Brothers Khalid and Brahim el-Bakraoui have been named as the two of the men who carried out attacks in Brussels on March 22, Belgian media report.

The RTBF broadcaster said Khalid and Brahim el-Bakraoui were known to police. It is believed at least one was among three suspects seen in a CCTV image at Zaventem airport.

Twin explosions at Zaventem airport and another at the Maelbeek metro station left about 34 dead and 250 wounded.

ISIS has said it was behind the attacks and warned that more would follow.

A minute’s silence for the victims will be held at midday. 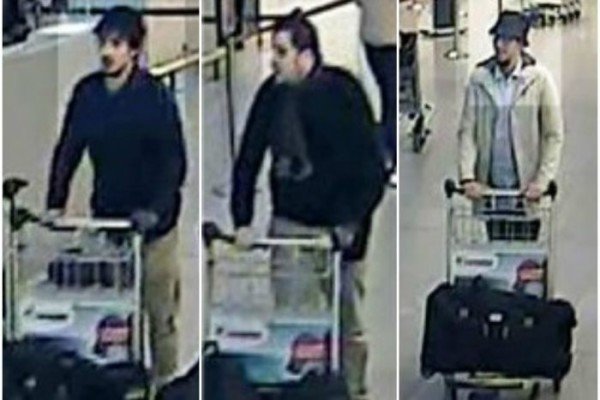 RTBF said the brothers were known to police and had criminal records.

The broadcaster, quoting a police source, said that Khalid el-Bakraoui, 27, had used a false name to rent the flat in the Forest area of Brussels where police killed a gunman in a shootout last week.

It was during that raid that police found a fingerprint of Salah Abdeslam, the main suspect in the Paris terror attacks of November 13.

Salah Abdeslam was arrested in a raid in Brussels on March 18 and is due to appear before a pre-trial court on March 23.

Khalid el-Bakraoui is on the Interpol website. It says he is being sought for terrorist activities.

RTBF said Khalid el Bakraoui was jailed for five years in 2011 for car-jacking while his brother Brahim, 30, was sentenced in October 2010 for firing at police.

It is not known if both of the brothers are in the CCTV image handed out by police of the three men at the airport.

Some Belgian media say that one of the brothers may have carried out the metro attack.

Najim Laachraoui was named earlier in the week by police as a wanted accomplice of Salah Abdeslam.

Federal prosecutors have not commented on the latest reports but said they would provide more information on March 23.

The three men were seen pushing trolleys carrying suspected bombs at Zaventem airport just before the blasts at a check-in hall.

Two were believed to have died in the attack, while the man in the hat is still being sought.

A third bomb was found and destroyed in a controlled detonation.

About an hour later another explosion ripped through a train at the Maelbeek metro station in Brussels, killing about 20 people.

The first of the victims to be named is Peruvian Adelma Tapia Ruiz, 37.

Adelma Tapia Ruiz had been at Zaventem airport with her Belgian husband and twin four-year-old daughters, who were unharmed, her brother told Peruvian radio.

Belgium has raised its terrorism alert to the highest level.

At least 34 people are believed to have been killed and dozens injured in attacks at Brussels international airport and Maelbeek metro station.

Brussels police have issued a wanted notice for a man seen pushing a luggage trolley through the airport.

The manwas pictured in CCTV footage with two other suspects who are believed to have died in the blasts.

ISIS said it was behind the attacks in a statement issued on the ISIS-linked Amaq agency. 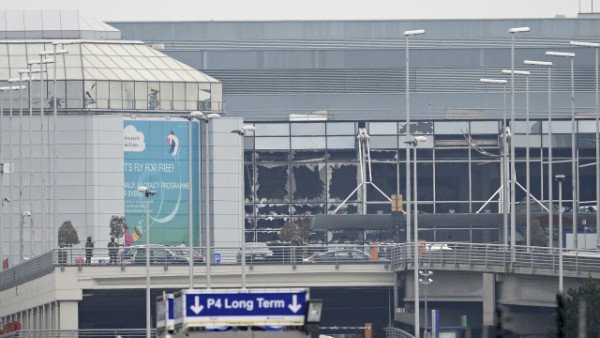 Belgium has raised its terrorism alert to its highest level. Three days of national mourning have been declared.

Belgian PM Charles Michel called the latest attacks “blind, violent and cowardly”, adding: “This is a day of tragedy, a black day… I would like to call on everyone to show calmness and solidarity.”

A suicide bomber was “probably” involved, the Belgian prosecutor said.

Some witnesses reported hearing shots fired and shouts in Arabic before the two explosions.

Others said that people fled the first blast, only to get caught in the second.

A third bomb failed to detonate and was destroyed by the security services.

The metro explosion occurred shortly after 09:00 during the rush hour at Maelbeek station.

It struck the middle carriage of a three-carriage train while it was moving away from the platform.

Brussels Mayor Yvan Mayeur said “about 20” people had died and more than 100 had been injured, 17 of them severely.

Local and international travel has been suspended or disrupted and security tightened across Europe.

All flights have been cancelled. The airport is due to reopen on March 23.

Eurostar has cancelled all trains to and from Brussels. The Thalys France-Benelux train operator says the entire network is closed.

In France the government has held an emergency meeting. There is also extra security at Dutch airports.

Two explosions have struck the departures area of Zaventem airport in Brussels, Belgium.

Belgian officials have confirmed casualties but have given no numbers. The cause of the explosions is unknown.

Another explosion has now been reported at the Maelbeek metro station close to the EU institutions. The whole metro system has been closed.

The explosions come four days after the capture in Brussels of Salah Abdeslam, the main suspect in the jihadist attacks in Paris in November 2015.

Belgium has now raised its terror threat to its highest level.

The airport is being evacuated and has been closed to flights.

Shots were fired and shouts in Arabic were heard before the two explosions, the Belga news agency reports.

Images on social media showed smoke rising from one of the buildings, amid reports of panic as people fled the airport.

Rail transport to the facility has been halted and people have been told not to come to the airport. 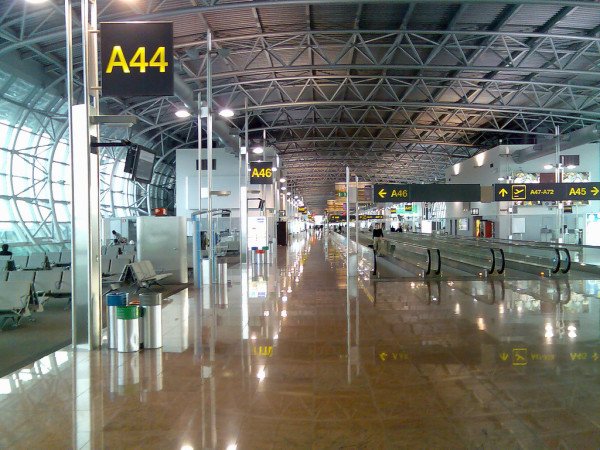 All flights have been diverted.

Other reports say at least one of the explosions was close to the American Airlines check-in area but this has not been confirmed.

The Belgian broadcaster RTBF quoted a witness as saying there were people injured or unconscious in the departure area, opposite the Sheraton hotel.

There are few reports yet about the metro blast.

Belgium’s Interior Minister Jan Jambon had said on March 21 that the country was on the highest level of alert for possible revenge attacks after the capture of Salah Abdeslam.

He told Belgian radio: “We know that stopping one cell can… push others into action. We are aware of it in this case.”

Zaventem airport is 7 miles north-east of Brussels and dealt with more than 23 million passengers in 2015.