Male Y chromosome may not become extinct after all, according to a new study.

Previous research has suggested the Y sex chromosome, which only men carry, is decaying genetically so fast that it will be extinct in five million years’ time.

A gene within the chromosome is the switch which leads to testes development and the secretion of male hormones.

But a new US study in Nature suggests the genetic decay has all but ended.

Professor Jennifer Graves of Australian National University has previously suggested the Y chromosome may become extinct in as little as five million years’ time, based on the rate at which genes are disappearing from the chromosome.

Genetics professor Brian Sykes predicted the demise of the Y chromosome, and of men, in as little as 100,000 years in his 2003 book “Adam’s Curse: A Future without Men.”

The predictions were based on comparisons between the human X and Y sex chromosomes. While these chromosomes were once thought to be identical far back in the early history of mammals, the Y chromosome now has about 78 genes, compared with about 800 in the X chromosome.

Jennifer Hughes and colleagues at the Whitehead Institute in Cambridge, Massachusetts, have sought to determine whether rumors of the Y chromosome’s demise have been exaggerated.

In a previous Nature paper in 2005, they compared the human Y chromosome with that of the chimpanzee, whose lineage diverged from that of humans about six million years ago.

They have now sequenced the Y chromosome of the rhesus monkey, which is separated from humans by 25 million years of evolution.

Previous research has suggested the Y sex chromosome, which only men carry, is decaying genetically so fast that it will be extinct in five million years' time

The conclusion from these comparative studies is that genetic decay has in recent history been minimal, with the human chromosome having lost no further genes in the last six million years, and only one in the last 25 million years.

“The Y is not going anywhere and gene loss has probably come to a halt,” said Jennifer Hughes.

“We can’t rule out the possibility it could happen another time, but the genes which are left on the Y are here to stay.

“They apparently serve some critical function which we don’t know much about yet, but the genes are being preserved pretty well by natural selection.”

Most human cells contain 23 sets of chromosomes, including one pair of sex chromosomes. In women, this sex pair consists of two X chromosomes, while men have one X and one Y chromosome. It is a gene within the Y chromosome which triggers the development in the embryo of male testes and the secretion of male hormones.

Genetic deterioration of the Y chromosome has occurred because unlike with the two X chromosomes in women, there is very little swapping of genetic material between the Y and X chromosome during reproduction. This means mutations and deletions in the Y chromosome are preserved between (male) generations.

“The X is fine because in females it gets to recombine with the other X but the Y never gets to recombine over almost its entire length, and shutting down that recombination has left the Y vulnerable to all these degenerative forces,” said Dr. Jennifer Hughes, “which is why we’re left with the Y we have today.”

Commenting on the paper, Professor Mark Pagel, an evolutionary biologist at the University of Reading and author of “Wired for Culture: Origins of the Human Social Mind”, said that while there might be some squabbling in academic circles over the timings of the events, the paper told us there was a future for males in the very long term.

“It’s a very nice piece of work, showing that gene loss in the male-specific region of the Y chromosome proceeds rapidly at first – exponentially in fact – but then reaches a point at which purifying selection brings this process to a halt.”

Experts found that men can inherit heart disease from their father after they have tracked the condition to the Y chromosome that dads pass to sons.

By studying the DNA of over 3,000 men, scientists found a particular version of the sex chromosome increases the risk of coronary artery disease by 50%.

The risk it confers is in addition to other heart risk factors like cholesterol, The Lancet reports.

Experts already know that men develop heart disease a decade earlier than women, on average. By the age of 40, the lifetime risk of heart disease is one in two for men and one in three for women.

Dr. Maciej Tomaszewski, from the University of Leicester in UK, and colleagues studied 3,233 biologically unrelated British men who were already enrolled in other medical studies investigating heart disease risk.

When they carried out genetic tests on the men they found that 90% possessed one of two common versions of Y chromosome – named haplogroup I and haplogroup R1b1b2.

And the risk of coronary artery disease among the men carrying the haplogroup I version was 50% higher than in other men.

The scientists say they now need to pinpoint precisely which genes on the Y chromosome are responsible.

But they believe they already know how they exert their effect – by upsetting a man’s immune system.

Dr. Maciej Tomaszewski, a clinical senior lecturer at the University’s Department of Cardiovascular Sciences, said: “We are very excited about these findings as they put the Y chromosome on the map of genetic susceptibility to coronary artery disease.

“Doctors usually associated the Y chromosome with maleness and fertility but this shows it is also implicated in heart disease.” 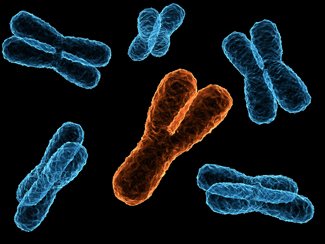 He said, ultimately, the discovery could lead to new ways to treat and prevent heart disease in men, as well as a genetic test to spot those at greatest risk.

In the meantime, Dr. Maciej Tomaszewski said men should focus on risk factors that they already have the power to modify themselves, such as getting enough exercise and eating a healthy diet to keep their blood pressure and cholesterol down.

Dr. Hélène Wilson of the British Heart Foundation, which part-funded the work, said: “Coronary heart disease is the cause of heart attacks, which claim the lives of around 50,000 UK men every year.

“Lifestyle choices such as poor diet and smoking are major causes, but inherited factors carried in DNA are also part of the picture. The next step is to identify specifically which genes are responsible and how they might increase heart attack risk.”