President Donald Trump is still planning legal challenges to the results in some key states as Joe Biden has been declared president-elect.

Trump’s lawyer Rudy Giuliani told Fox News that it would be wrong for the president to concede because: “There is strong evidence that this was an election that in at least three or four states, and possibly 10, it was stolen.”

The Trump campaign is yet to provide this “strong evidence” but says it plans to lodge lawsuits in several key states on November 9.

A lawsuit was filed in Georgia’s Chatham County to pause the count, alleging problems with ballot processing.

On November 5, a judge dismissed this lawsuit, saying there was “no evidence” of improper ballot mixing.

On November 4, the Trump campaign filed a lawsuit to stop the count over claims of a lack of access to observe the process.

A judge dismissed the lawsuit, saying there was insufficient evidence that oversight procedures weren’t being followed.

Rudy Giuliani says further lawsuits will be filed over a lack of access for poll watchers in the state.

Poll watchers are people who observe the counting of votes, with the aim of ensuring transparency. They are allowed in most states as long as they are registered before Election Day.

In some areas this year, there were restrictions put in place before Election Day, in part due to coronavirus pandemic. There are also capacity limits set to avoid intimidation.

A 20-foot perimeter was set in the Philadelphia counting facility but this was challenged and a court ruling on November 5 said it should be reduced to six feet – as long as poll watchers adhered to Covid-19 protocols.

The Trump campaign has filed a federal lawsuit accusing election officials of violating the judge’s order.

Rudy Giuliani said: “Even when a court order was obtained to allow the Republican inspectors to get six feet closer, they moved the people counting the ballots six further feet away.”

However, the election officials insist they behaved properly.

On November 5, Pennsylvania Secretary of State Kathy Boockvar said: “Every candidate and every political party is allowed to have an authorized representative in the room observing the process. Some jurisdictions including Philly are also live streaming, so you can literally watch their counting process.”

Another ongoing case disputes how long voters should be able to provide proof of identification if it’s missing or unclear on their postal ballots. Voters are currently allowed to fix their ballots up to November 12, but the Trump campaign has filed a lawsuit seeking to reduce this deadline to November 9.

The legal challenge in Pennsylvania also centers on the state’s decision to count ballots that are postmarked by Election Day but arrive up to three days later. Republicans are seeking an appeal.

On November 7, the Trump campaign filed a lawsuit in Arizona, claiming some legal votes were rejected.

The case cites declarations by some poll watchers and two voters who claim they had problems with voting machines.

The lawsuit is under review, but Arizona’s Secretary of State said it was “grasping at straws”.

The Trump campaign has said it will request a recount in the state “based on abnormalities seen” on Election Day, although this wouldn’t require a lawsuit.

It’s unclear when this recount would take place, since typically these don’t happen until after officials finish reviewing the votes.

Wisconsin’s deadline for this part of the process is November 17.

Columbia University Law School professor Richard Briffault says there was a recount in Wisconsin in 2016 as well, and it “changed about a hundred votes”.

The Nevada Republican Party tweeted saying: “Thousands of individuals have been identified who appear to have violated the law by casting ballots after they moved from Nevada.”

Donald Trump’s legal team produced a list of people who it claimed had moved out of state but voted.

However, the list alone does not prove a violation of law.

People who leave the state within 30 days before an election can still vote in Nevada. Students from Nevada – who are studying elsewhere – can also vote.

The case is focused on voters in Clark County, but the county’s registrar has said: “We are not aware of any improper ballots that are being processed.”

In a separate case, a federal judge blocked attempts by the Republicans to stop the use of a signature verification machine, rejecting allegations that it wasn’t able to check signatures correctly.

On November 4, Donald Trump claimed voting fraud – without providing evidence – and said: “We’ll be going to the US Supreme Court.”

If the election result is challenged, it would first require legal teams to challenge it in the state courts.

State judges would then need to uphold the challenge and order a recount.

The Supreme Court could then be asked be asked to weigh in.

To date, the 2000 election is the only one to be decided by the Supreme Court.

In 2000, Democrat Al Gore lost Florida – and the presidential election – by 537 votes out of a total of almost six million cast in the state.

This was followed by a highly controversial recount process that lasted over a month – until the Supreme Court ruled to stop recounting and in favor of Republican George W. Bush who became president.

Footage of an enormous vessel plunging into a harbor in Wisconsin shows dangerous debris flying right at the camera.

Posted on You Tube by Jason Bundoff, the impressive video shows the ship tumbling sideways into the water breaking off its sliders and creating a titanic-sized wave that engulfs the camera.

According to a Reddit user claiming to be Jason Bundoff’s friend, the photographer shot the video while an intern at the shipyard and survived the ordeal with scratches and bruises.

Others, he said, were not so lucky and one person allegedly broke his leg.
The startling video has created waves online where commentators familiar with the shipping industry have placed the vessel at Marinette shipyard in Wisconsin though the date is unknown.

On Gcaptain.com, users have also debated whether there was in fact anyone filming the launch at all. 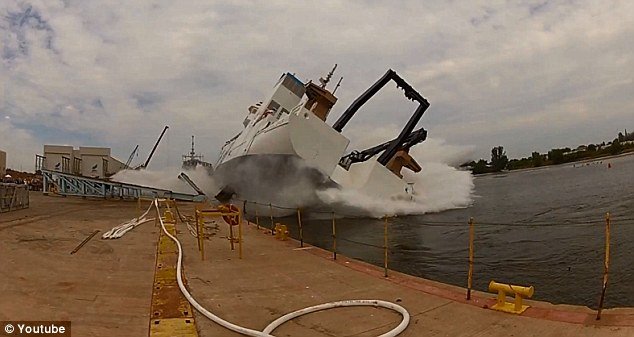 One says: “Definately Marinette’s yard, the ship in the background is one of the Freedom Class LCS boats. Given the lack of other people in the shot I’d bet this was a remote camera.”

Certainly the amount of debris and water that comes flying at the camera looks as if it would cause more than scratches and bruises but according to his Redditor friend, Jason Bundoff is afraid to post anything more about the aftermath for privacy reasons.

What is clear is that the sliders that guide the boat into the water don’t extend as far as they should.

Though all launches create a dramatic wave, the ship usually tips back the right way after its initial immersion.

In Jason Bundoff’s video, clearly part of the dock equipment breaks off explaining the debris and validating at least the fact that it the launch was a failure.

6,810 bottles of the world’s finest wine and champagne crashed on the floor at Superior Discount Liquors in Sheboygan, Wisconsin.

The 78 feet long shelving unit suddenly has becoming detached from its anchoring wall.

A total of 6,810 bottles of wine and champagne, standing four shelves high, smashed on the floor.

The floor turned into a sea of red liquor and broken glass.

6,810 bottles of the world's finest wine and champagne crashed on the floor at Superior Discount Liquors in Sheboygan, Wisconsin

Managers at Superior Discount Liquors are stumped as to why or how it happened, but they admit the shelves are 31 years old.

“It just kept rolling away from the wall from front to back, and I was in disbelief. I didn’t know what to do or say. The whole thing only took 10 seconds.”

Watch as a stunned store worker near the tumbling shelves breaks the land speed record as he scrambles to safety.

After the initial shock, store workers kept their cool and cleaned the blood-red mess up as quickly as possible with snow shovels, shop vacuums and floor scrubbers.

They didn’t even have to close the store.

The incredible wine incident was captured by two surveillance cameras in the store, in black and white and colour!

The images caught on camera were uploaded on Youtube on October 10 and has already had nearly 266,000 views.