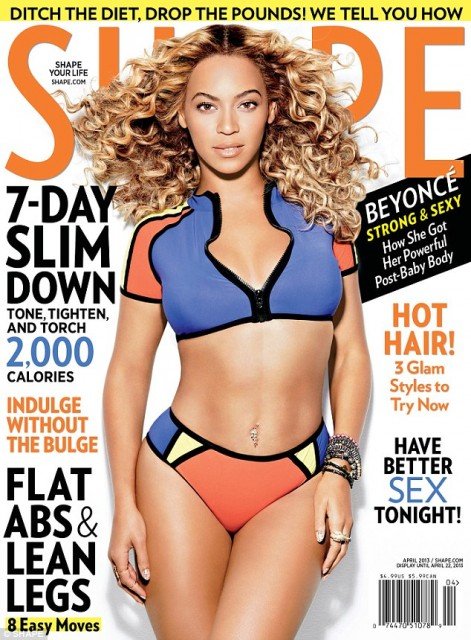 June Shannon has revealed that she’s lost more than 100 lbs in the past two years without dieting or hitting the gym.

Honey Boo Boo’s mother said that she tipped the scales at 365 lbs back in January 2011 and now she weighs a lighter 263 lbs.

Revealing her weight-loss secrets June Shannon, a 33-year-old mother-of-four, told TMZ: “With the show I’ve been more active. They have me running around and going different places… I guess it’s paying off.”

“I haven’t done any surgeries… no diet pills… never went to the gym,” she insisted.

On her reality show Here Comes Honey Boo Boo, Mama June is regularly seen tucking into giant plates of food, with her favorite family dish being Sketti – a saucy combination of spaghetti, ketchup and butter.

A recent episode also showed how June Shannon’s Thanksgiving menu featured 15 cans of vegetables, 12 cans of cranberry sauce and a large turkey coated with a gallon of butter.

“Just like all my other recipes, butter and sugar makes everything taste better,” she exclaimed as she prepared the gut-busting feast.

However, recently June Shannon has been trying to shake up her appearance.

While she had greying curls pulled back off her face in previous episodes, June Shannon appeared on screen last month with a new shoulder-length blonde hairdo.

She also sported a tanned complexion, completing the transformation.

One imagines that the makeover was inspired by the family’s newfound fame – as June Shannon is photographed wherever she goes.

June Shannon returns to screens on Sunday at 8 p.m. with another holiday special titled A Very Boo Christmas.

During the installment June Shannon takes her family to the flea market to find Christmas deals and also teaches them the joy of re-gifting.

Whether it’s low fat, low carb, low GI – most of us have tried, and failed, to lose weight at some point.

Now Dr. John Mansfield is claiming the problem could be much more deep-rooted – a food sensitivity.

If the body is aggravated by a food, it can cause sensitivity and weight gain, says Dr. John Mansfield, a pioneer in the field of allergy and nutrition.

In fact, in his new book, the Six Secrets of Successful Weight Loss, he says food sensitivities are “by far the commonest single cause of weight gain”, rather than too many calories or a lack of exercise.

“One of the most successful weight loss secrets is to find out if you are sensitive to any ordinary, everyday foods such as wheat, corn, eggs, yeast or milk,” he said.

“Food sensitivities, which vary considerably from one person to another, were the prime cause in more than 70% of the patients I treated over a period of 31 years in clinical practice, specializing in allergy and nutritional medicine.”

Dr. John Mansfield adds that many of us have no idea we are sensitive to certain foods because we eat them all the time – and then put up with symptoms such as headaches or fatigue without realizing our diet is to blame.

He said: “I wrote the book to help people who are frustrated by diets and still struggle to reach their ideal weight. As every individual has different health and nutritional influences, the <<one-size-fits-all>> diet does not simply work.

“Obesity and weight problems have reached epidemic proportions in the western world in the last three decades, with more and more people struggling to achieve their ideal weight.”

“Low-fat diets don’t work because we need fat to regulate our appetites. If you are not eating enough fat your appetite fails to be satisfied and you are constantly hungry, and therefore eat more.

“The repetitive mantra of the doctors, dieticians and governments is to reduce calorie intake and increase exercise. Yet this approach has not produced the desired results.

“Despite growing evidence against it, the experts are stuck in the narrow one-track conceptual groove of calorie control, a strategy that consistently fails millions of people.”

Instead, Dr. John Mansfield advises checking for underlying health issues that may be affecting your weight, such as a thyroid problem (an underactive thyroid can lead to weight gain) and identify food sensitivities “that inflame the body and contribute to weight gain”.

The theory is that an allergic-type reaction caused by food sensitivity disrupts a feedback mechanism in a part of the brain called the hypothalamus.

After eating, this receives signals from the gut that stored body fat has increased, prompting us to feel less hungry.

“When this mechanism is working well, your body weight remains constant, despite quite widely varying calorie consumption from day to day,” said Dr. John Mansfield.

“However, the adverse reaction caused by regularly eating foods you are sensitive to causes the ‘constant’ level of weight to be permanently set at an incorrect, higher level.

“This is why you can’t shed the pounds regardless of what you eat.”

In order to work out which foods might be affecting your health, he advises following an “elimination” diet and gradually re-introducing potential “problem” foods, such as milk, eggs and yeast.

The “elimination” diet allows you to eat as much as you like of the 42 foods identified as being “low sensitivity foods”, such as turkey, lamb, many types of fish, lentils, vegetables such as green beans and avocado and fruit such as apples.

Dr. John Mansfield claims that through this process of elimination of “high sensitivity foods” weight loss is quickly achieved within the first seven days.

However, the overall aim of this diet is to introduce a broad range of foods back into the diet that don’t adversely affect weight or induce other symptoms such as headache and fatigue.

“The process takes on average up to six weeks to reintroduce foods back into your diet but the reality is that you will then know which foods you can eat in quantity, without influencing your weight or how you physically feel,” he says.

Dr. John Mansfield has identified the 20 foods most likely to produce a reaction, with the most common at the top:

Milk and products made from it

Yeast (used in many products such as bread, vinegar and alcohol)