Boston bombers Dzhokhar and Tamerlan Tsarnaev were planning more attacks across the city and were already building the bombs to do this, says the city’s police commissioner Edward Davis.

Edward Davis says it’s his belief that 19-year-old Dzhokhar Tsarnaev and his 26-year-old brother Tamerlan “were going to attack other individuals”. He says that’s based on the evidence at the scene and the cache of weapons the brothers had at their disposal.

However, Edward Davis claims, releasing photos of the two Boston Marathon bombing suspects “forced them out of their hideou”’ and spurred them into Thursday and Friday’s deadly night time car chaos and gun battle with law enforcement. 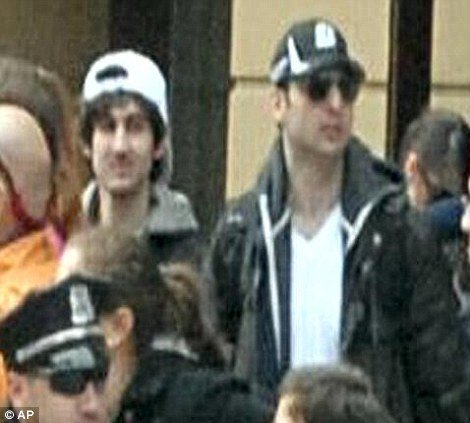 “It forced them out of their hideout and they decided to commit further violent acts. But it’s my belief that they were already manufacturing explosive devices. Further violent acts were inevitable,” Edward Davis told The Boston Globe.

The suspects “were not making those explosives for nothing”, he told the newspaper.

“There was a plan there, and I believe that tragically Sean Collier lost his life, but he was truly protecting the citizens of the city.”

Handguns, a rifle and at least six bombs, three of which detonated were found at the scene on Friday after officers had their first showdown with Dzhokhar and Tamerlan Tsarnaev in Watertown, Massachusetts.

And it is believed that federal prosecutors are putting the final touches together on charges against Dzhokhar Tsarnaev, despite his throat wound leaving him unable to speak.

Boston Marathon bomber Dzhokhar Tsarnaev may have tried to kill himself rather than surrender to police after he was cornered in David Henneberry’s backyard boat in Watertown, but failed in his suicide attempt, it has been revealed.

Authorities have said they cannot question Dzhokhar Tsarnaev, who is in serious condition at a Boston hospital, because of a throat wound. Boston Mayor Tom Menino said on Sunday that federal agents may never be able to speak with him.

Tom Menino didn’t elaborate on his comment and it is unknown whether the gunshot also caused brain damage.

The new twist in the story of Dzhokhar Tsarnaev’s dramatic capture comes as the Boston police commissioner warns that he and his brother Tamerlan were plotting more bomb attacks on the city and they were caught just in time.

New video also revealed the final moments of Dzhokhar Tsarnaev’s standoff with police. The images come from a thermal imaging camera aboard a Massachusetts State Police helicopter that was hovering above the dramatic police standoff.

Dzhokhar Tsarnaev, 19, was captured by police on Friday night after he was discovered hiding out in a boat that was parked on a trailed at a house in suburban Watertown, Massachusetts.

It is believed that federal prosecutors are putting the final touches together on charges against Dzhokhar Tsarnaev, despite his throat wound leaving him unable to speak.

Massachusetts Governor Deval Patrick revealed on Sunday that surveillance video from the Boston Marathon attack shows one suspect dropping his backpack and calmly walking away from it before the bomb inside it exploded.

The video clearly puts Dzhokhar Tsarnaev at the scene of the attack, Deval Patrick said on NBC.

“It does seem to be pretty clear that this suspect took the backpack off, put it down, did not react when the first explosion went off and then moved away from the backpack in time for the second explosion,” he said.

“It’s pretty clear about his involvement and pretty chilling, frankly.”

Dzhokhar Tsarnaev reportedly lost significant amounts of blood after suffering two wounds. One was a gunshot to the leg he sustained during a running gun battle with police early Friday. Another was the wound to his neck.

CBS News correspondent John Miller reports: “They say it appears from the wound that he might have stuck a gun in his mouth, and fired and actually just went out the back of his neck without killing him.

“That’s one of the reasons he’s unable to communicate, but he can understand what they’re saying. And they believe there will be a point where he will be able to talk to him.”

If the report proves true, Dzhokhar Tsarnaev may have had no intention of being taken alive by police as they closed in on David Henneberry’s boat where he was hiding in Watertown, Massachusetts, Saturday night.

Exactly what happened in the boat remains unclear. Neighbors reported hearing police SWAT officers unleash several bursts of automatic weapons fire as they closed in on the 25-foot vessel.

A police robot tore open the cover of the boat and a state police helicopter used an infrared camera to reveal Dzhokhar Tsarnaev’s location in the stern.

Officers lobbed flash grenades into the boat in attempt to stun the suspect and called from him to surrender.

After Dzhokhar Tsarnaev was taken into custody, he was rushed to the hospital.

Many reports say the suspect climbed out of the boat on his own power. The Los Angeles Times reports that Dzhokhar Tsarnaev was swearing profusely in the ambulance.

Dzhokhar Tsarnaev has not be read his Miranda rights – but a battle is being waged whether he should.

Four prominent Republican Congressmen have argued that the naturalized US citizen should be treated as an “enemy combatant”, meaning that Dzhokhar Tsarnaev would not be Mirandized.

Senators John McCain of Arizona, Lindsey Graham of South Carolina, and Kelly Ayotte of New Hampshire, as well as Rep. Peter King, New York, said in a joint statement they “do not want this suspect to remain silent”.

In a statement, the four Republican lawmakers wrote: “The accused perpetrators of these acts were not common criminals attempting to profit from a criminal enterprise, but terrorists trying to injure, maim, and kill innocent Americans.”

Officials said late Friday after Dzhokhar Tsarnaev was detained that they would use a public safety exemption to delay the suspect’s Miranda rights.

However, the exemption expires 48 hours after the arrest, so quick actions must be taken.

The reading of a suspect’s Miranda rights alerts a person of their right to remain silent, the right to an attorney, and the right to a fair and speedy trial.

The politicians wrote that alerting Dzhokhar Tsarnaev of his rights as a naturalized US citizen shouldn’t be anything near a priority.

“We should be focused on gathering intelligence from this suspect right now that can help our nation understand how this attack occurred and what may follow in the future.”

The lawmakers then challenged the Obama administration to consider the “enemy combatant” option, saying: “We continue to face threats from radical Islamists in small cells and large groups throughout the world.”

The debate over denying the suspect his Miranda rights has sparked outrage in the American Civil Liberties Union. The organization said Saturday that denying Dzhokhar Tsarnaev his rights is “un-American”.

Anthony D. Romero, ACLU’s executive director, said in a statement today: “Every criminal defendant is entitled to be read Miranda rights. The public safety exception should be read narrowly.

“It applies only when there is a continued threat to public safety and is not an open-ended exception to the Miranda rule. Additionally, every criminal defendant has a right to be brought before a judge and to have access to counsel.

“We must not waver from our tried-and-true justice system, even in the most difficult of times. Denial of rights is un-American and will only make it harder to obtain fair convictions.”

Previously unseen video of the dramatic capture of Boston Marathon bomber Dzhokhar Tsarnaev shows a police robot ripping apart the tarp concealing the suspect and numerous flash bang grenades being thrown into the boat where he lay.

In the final moments before his capture on Friday night, Dzhokhar Tsranaev appeared to lay still inside David Henneberry’s boat in a backyard in Watertown, Massachusetts, before he was taken into custody. 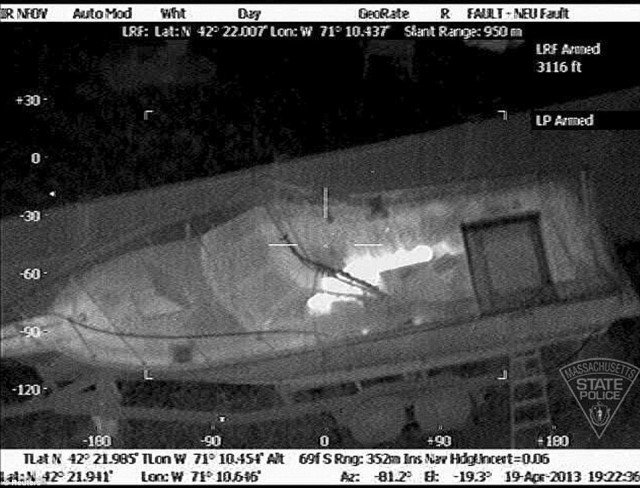 Dzhokhar Tsarnaev, 19, has been hospitalized in serious but stable condition after his arrest and officials say he cannot speak to investigators yet because he has been “intubated and sedated” with a throat wound.