Home Tags Posts tagged with "us and israel"

President Donald Trump has accused Jewish Americans who vote for the Democratic Party of “either a total lack of knowledge or great disloyalty”.

The Jewish Democratic Council of America said the president was trying to “weaponize and politicize anti-Semitism” for political gain.

He has repeatedly accused Democratic representatives Ilhan Omar and Rashida Tlaib of anti-Semitism.

Under pressure from President Trump, Israel last week blocked Ilhan Omar and Rashida Tlaib from entering the country. The two women, who are vocal critics of the Israeli government, had been due to visit the occupied West Bank and East Jerusalem.

Israel later agreed to let Rashida Tlaib make a “humanitarian” visit to her grandmother in the occupied West Bank, but she declined, saying she could not comply with the “oppressive conditions” being imposed.

Speaking to reporters on August 20, President Trump said: “I think any Jewish people that vote for a Democrat, I think it shows either a total lack of knowledge or great disloyalty.”

On August 21, the president denied his comments were racist and told reporters: “If you vote for a Democrat, you’re being disloyal to Jewish people and you’re being very disloyal to Israel.”

Earlier in the day, President Trump quoted a conservative commentator’s praise on Twitter who said “the Jewish people in Israel love him like he’s the King of Israel”.

The remark was denounced by a number of Jewish American groups, which said it played on an anti-Semitic canard that accuses Jews of being more devoted to Israel or their faith than to their own countries.

The same notion of dual loyalty has landed Ilhan Omar, a Minnesota congresswoman, in hot water.

Ilhan Omar has apologized after claiming that Israel had “hypnotized” the world. She was also rebuked by the Democratic-controlled House of Representatives comments targeting lobbying firms that support Israel.

Ahead of the vote, which condemned “hateful expressions of intolerance”, Ilhan Omar pushed back by questioning what she termed “the political influence in this country that says it is OK for people to push for allegiance to a foreign country”.

The president flew in from Saudi Arabia, a key US ally, where he gave a speech to Arab and Muslim leaders at a summit.

In Israel, Donald Trump will hold talks with both Israeli and Palestinian leaders during the course of his two-day stop.

He has called an Israeli-Palestinian peace agreement “the ultimate deal”, but has been vague about what form it should take.

Donald Trump has said he prefers to leave it to both sides to decide between them in direct talks.

According to the Associated Press and Israel’s Haaretz, President Trump’s flight between Saudi Arabia and Israel was likely to be the first between the two countries, that have no diplomatic relations. 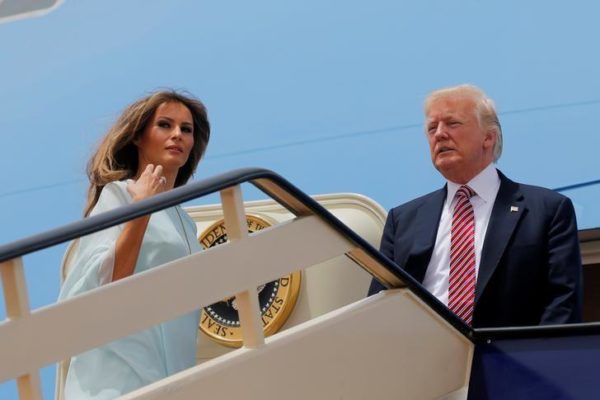 The president has been widely seen as considerably more supportive of Israel than his predecessor, Barack Obama. Donald Trump has taken a softer position on the contentious issue of Israeli settlements, suggesting that their expansion rather than their presence might hamper the search for peace.

More than 600,000 Jews live in about 140 settlements built since Israel’s 1967 occupation of the West Bank and East Jerusalem, land Palestinians claim for a future state.

The Israeli settlements are considered illegal under international law, though Israel disputes this.

President Trump has also sent mixed signals on the issue of Jerusalem, pledging to move the US embassy there from Tel Aviv, angering Palestinians and delighting Israelis.

However, he has since stalled, with Secretary of State Rex Tillerson recently telling NBC News that President Trump was weighing it up.

Israel regards the whole of Jerusalem as its capital, while the Palestinians claim the east as their capital. The international community does not recognize Israeli sovereignty over Jerusalem and countries maintain their embassies in Tel Aviv.

There has been some consternation in Israel in the run-up to President Trump’s trip over remarks made by administration officials.

Israel’s PM Benjamin Netanyahu rejected Rex Tillerson’s suggestion that moving the embassy might harm the peace process, while a US Consulate official caused outrage by saying the Western Wall, one of Judaism’s holiest sites, was “not in your [Israel’s] territory but part of the West Bank”.

The White House later said: “The Western Wall is in Jerusalem… such alleged statements would not have been authorized by the White House, [and] do not reflect the US position, and certainly not the president’s position.”

President Trump is expected to visit the Western Wall, located in the Old City of East Jerusalem, in a private capacity on May 22 – the first sitting US president to do so.

Donald Trump will also visit the nearby Church of the Holy Sepulcher, where according to Christian tradition Jesus was buried and resurrected.

His trip also comes days after it was reported that the president had leaked to Russia’s foreign minister classified intelligence information said to have come from an Israeli source. The incident has raised questions about the confidentiality of secret intelligence passed to the US by its closest Middle Eastern ally.

A huge security operation is under way for Donald Trump’s visit, during which he will hold separate meetings with PM Benjamin Netanyahu in Jerusalem on May 22 and Palestinian leader Mahmoud Abbas in Bethlehem the following day.

A day before Donald Trump was due to arrive, Israel’s announced economic and development concessions for Palestinians, including easing some restrictions on movement and approving industrial construction projects.