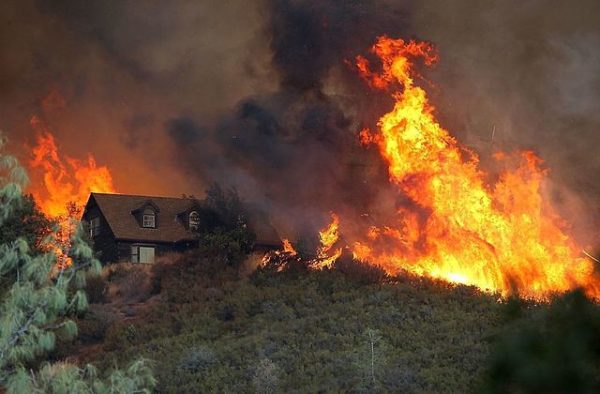 He said vast fires, such as the ones that have ravaged southern California in recent days, “could happen every year or every few years”.

“We’re facing a new reality in this state,” the governor said.

Jerry Brown made the comments after surveying the damage in Ventura County, north of Los Angeles.

Thousands of firefighters have been battling the fires since December 4.

Jerry Brown, a Democrat who has attacked the Trump administration’s stance on climate change, said: “We’re facing a new reality in this state, where fires threaten people’s lives, their properties, their neighborhoods, and of course billions and billions of dollars.

“With climate change, some scientists are saying southern California is literally burning up.”

The largest wildfire – known as the Thomas Fire – burned close to 150,000 acres, an area of land roughly the size of Chicago, Reuters reported.

On December 9, firefighters began to make progress in containing the blaze.

Six large wildfires, and some smaller blazes, erupted on December 4 in southern California. Fanned by high winds, they swept through tens of thousands of acres in a matter of hours.

The fires have been driven by extreme weather, including low humidity and parched ground.

The largest of the blazes, the Thomas fire in Ventura County, spread as far as the Pacific coast and swept across 180 square miles.

About 5,700 firefighters were brought in to battle the brushfires, with some drafted in from neighboring states to help.

President Donald Trump issued a state of emergency to “help alleviate the hardship and suffering that the emergency may inflict.”

Hundreds of buildings have been destroyed and vast areas of land have been badly scorched.

Three firefighters were injured and one death was reported after a 70-year-old woman was found dead in her car on an evacuation route.

Nearly 200,000 residents were evacuated from their homes, with many forced to flee in the middle of the night as the flames rapidly spread.

There are fears the blaze will seriously hit California’s multi-million dollar agricultural industry.

About 90% of US avocados are grown in California, and much of the state’s crop has been wiped out.

The strong winds subsided on December 9 and firefighters finally made some progress in containing the fires.

However, forecasters expect the winds to pick up again on December 10 meaning they are under pressure to extinguish them quickly.

Elsewhere, several evacuation orders have been lifted and residents are beginning to return home to assess the damage.