Portia de Rossi, who is married to Ellen DeGeneres, made the allegation in a tweet posted on November 8.

The actress alleges that during a movie audition Steven Seagal told her “how important it was to have chemistry off-screen” before unzipping his trousers.

Steven Seagal, 65, is best known for his action roles during the 1980s and 1990s, including Under Siege and Flight of Fury. The star was given Russian citizenship by President Vladimir Putin in 2016.

Several other women have come forward to accuse Steven Seagal of inappropriate behavior and harassment, including the Good Wife actress Julianna Margulies and model Jenny McCarthy.

Steven Seagal is the latest person in Hollywood to stand accused of harassment or assault after women began coming forward about producer Harvey Weinstein. 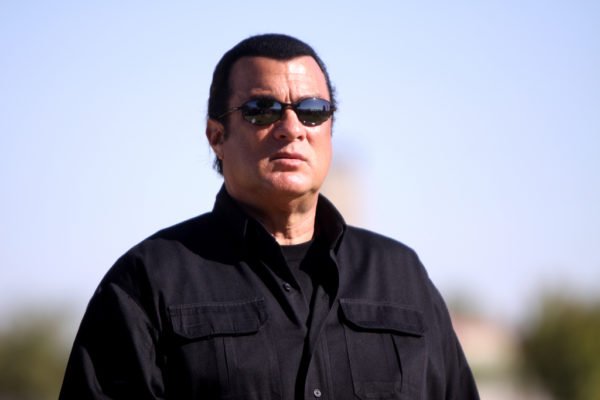 Harvey Weinstein has denied all allegations of non-consensual made against him.

In the tweet, Portia de Rossi said her complaints about Steven Seagal’s behavior were dismissed at the time by her agent.

The actress did not specify which movie the audition was for, or in which year the incident allegedly happened.

Ellen DeGeneres shared Portia de Rossi’s tweet with her 75 million followers on November 9 with the caption: “I am proud of my wife.” Kelly LeBrock, 53, was pulled over by a California Highway Patrol officer on November 30 near Santa Barbara after she was reportedly spotted driving erratically, speeding and failing to brake at a stop sign. Kelly LeBrock was reportedly spotted driving erratically, speeding and failing to brake at a stop sign

Kelly LeBrock was taken into custody and booked after struggling to complete a field sobriety test, according to TMZ.com.