Lindsay Lohan was back to work last night, hours after being found non-responsive in her room in Ritz Carlton Hotel in Marina del Rey.

The actress was on a night shoot at the Church of Scientology Celebrity Center in Hollywood last night, where she was again in character as Elizabeth Taylor.

She tweeted: “Note to self.. After working 85hours in 4days, and being up all night shooting, be very aware that you might pass out from exhaustion & 7 paramedics MIGHT show up @ your door.”

Lindsay Lohan went on: “Hopefully theyre cute. Otherwise it would be a real let down. XL @mrsalperez -back on set,’ in reference to costume designer Salvador Perez.”

The actress was not taken to hospital, as was initially reported, but was checked out of her hotel room at the Ritz Carlton Hotel in Marina del Rey, according to TMZ. 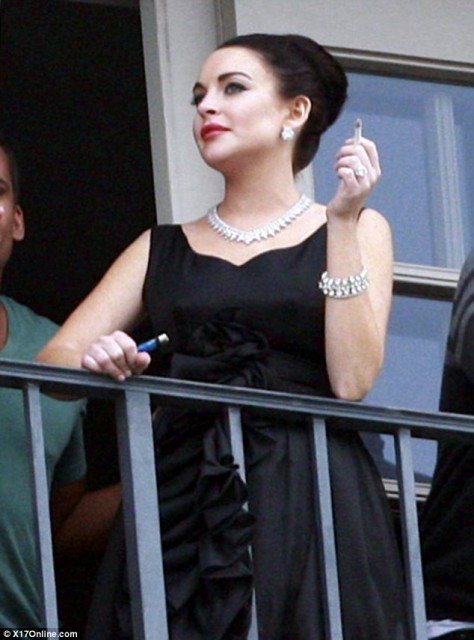 Lindsay Lohan was back to work last night, hours after being found non-responsive in her room in Ritz Carlton Hotel in Marina del Rey

Paramedics were called to the hotel at 10:15 a.m., according to ABC News.

According to TMZ, medical officers arrived at the scene after Lindsay Lohan called the Liz & Dick production team this morning and complained about feeling unwell.

A private doctor was then called and before the doctor arrived at the premises they asked the hotel to check on the actress.

When a member of hotel staff knocked on her door and she did not rouse, 911 was called by a member of the Liz & Dick production team.

When paramedics arrived on the scene, they reportedly determined that the star was “ok”.

Apparently Lindsay Lohan has been filming for two days in a row with very little sleep and decided to stay at the hotel in order to get some much-needed rest.

Her representative, Steve Honig, told E! News yesterday: “Lindsay has been working a grueling schedule for the last couple of days.

“Last night she worked from 7 p.m. to 8 a.m. She was exhausted and went back to her room to sleep.

“Producers were apparently concerned and called the fire department and paramedics found her sleeping but determined that she was fine, just extremely exhausted and slightly dehydrated.

“She is on her way home now to rest and will be back on set later today.”

He added that no drugs or alcohol were involved in the incident.

Meanwhile Lindsay’s mother Dina Lohan has spoken out about the ordeal and said that she is glad that her daughter is OK.

She told X17online: “Lindsay’s ok. She worked until 6:15 a.m. and wrapped, then went home to sleep. She’s working so hard and just wants it to be perfect.”

Lindsay Lohan has previously battled problems with drugs and alcohol, but in March was finally taken of probation for a number of offenses stemming back to a 2007 arrest for DUI.

She is now making her comeback with Liz & Dick – in which she plays Elizabeth Taylor – and has also been cast in movie The Canyons.

On Tuesday Lindsay Lohan was spotted filming scenes for Liz & Dick on a balcony at the hotel.