UNHCR, the UN’s refugee agency, has warned that as many as 700,000 people could have fled Syria by the end of the year, a huge increase on its previous estimate.

Some 294,000 refugees have already left Syria, and the UNHCR is appealing for money to help deal with the crisis.

Most of the refugees are housed in camps in Turkey, Lebanon and Jordan.

Rami Abdel Rahman, from the Syrian Observatory for Human Rights (SOHR), said the figure included only those whose names had been documented.

UNHCR has warned that as many as 700,000 people could have fled Syria by the end of the year

“If we count the unidentified bodies, the figure will be much higher,” he said.

The observatory (SOHR) said 199 of Wednesday’s dead were civilians.

Other groups estimated Wednesday’s death toll to be considerably higher.

The UNHCR said between 2,000 and 3,000 refugees were fleeing the violence into neighboring countries every day.

“Many refugees are arriving with only the clothes on their backs,” said Panos Moumtzis, the agency’s regional co-ordinator for Syrian refugees.

“Some have been displaced many times before leaving Syria. They need humanitarian assistance from day one.”

The agency said in March it estimated that about 100,000 people would have fled by the end of the year.

But that number was surpassed in July.

The agency said it was urgently trying to prepare for winter, warning that many of the refugees were still living in tents.

For much of the past 18 months rebel groups have been fighting against the regime of President Bashar al-Assad.

Activists estimate more than 27,000 people have died in the violence.

Repeated efforts by the international community to find a diplomatic solution have foundered because of a deep divide at the UN Security Council.

Late on Wednesday US Secretary of State Hillary Clinton said the Security Council was “paralyzed” and urged the members to overcome their differences.

The United Nations refugee agency says that more than 200,000 Syrians have fled to neighboring countries as the conflict has intensified.

The UNHCR said the figure was already more than its projection of 185,000 for the end of this year.

About 30,000 arrived in Turkey, Iraq, Lebanon and Jordan in the past week.

Meanwhile, activists say Syrian army tanks have reached the centre of the Damascus suburb of Darayya, after shelling killed about 20 people.

The reported offensive is part of a government military campaign launched this week to regain control of outlying areas of the capital. 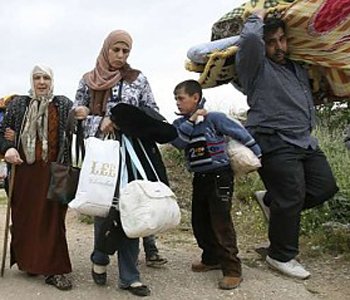 The United Nations refugee agency says that more than 200,000 Syrians have fled to neighboring countries as the conflict has intensified

The violence in Syria has taken a toll on civilians, with more than 200,000 registering with the UNHCR in neighboring countries since security forces began suppressing pro-democracy protests in March 2011.

“We are now at a much higher level of 202,512 refugees in the surrounding region,” UNHCR spokesman Adrian Edwards told a news conference in Geneva on Friday.

“In Jordan, a record 2,200 people crossed the border overnight and were received at Zaatari camp in the north,” he added.

The total reflects an increase of about 30,000 in the past week, but also takes into account a change in the way refugees are counted in Jordan.

Adrian Edwards said the deteriorating security situation in Lebanon, where 51,000 refugees are registered, was “hampering our work to help refugees fleeing Syria’s conflict, though operations are continuing”.

There are also thought to be more than 1.2 million internally displaced people in Syria, and 2.5 million in need of humanitarian assistance.

The main battle fronts are currently in the second city of Aleppo and in Damascus, where the government this week launched a fierce military offensive to crush rebel resistance on the outskirts of the capital.

Opposition activists said troops backed by tanks had entered the south-western suburb of Darayya on Friday afternoon, and had been seen on al-Thawra Street, in the centre.

“The rebels have mostly slipped away. The fear now is that the army will round up young men and summarily execute them, as it did in Muadhamiya,” activist Abu Kinan told the Reuters news agency, referring to a nearby suburb where the bodies of as many as 40 men shot at close range were reportedly found in buildings after troops pulled out.

Earlier, the army had used multiple rocket launchers located at the nearby Talat Qawqaba military base and artillery at Mezzeh military airport to bombard Darayya.

It has targeted the town for several days, shelling it from afar and clearing it with ground troops, trying to sweep it clear of rebels.

But rebel fighters are using classic guerrilla tactics, making it difficult for the army to defeat them despite its use of massive force.

Activists said at least 70 people had been killed in Darayya in the past 72 hours, most of them civilians.

Opposition sources also reported fighting on Friday in other suburbs of Damascus, as well as heavy shelling on several districts of Aleppo.