Republican Senator Rand Paul has been attacked at his home in Bowling Green, Kentucky, police and his office say.

Rand Paul’s spokesman was quoted by media as saying the senator “was blindsided and the victim of an assault” on November 3.

According to The Hill website, the alleged assailant, Rene Boucher, was arrested and “Senator Paul is fine”, Kelsey Cooper said.

The 59-year-old assailant has been charged with assault, police say.

They said Rand Paul suffered a minor injury. It is unclear why he was attacked. 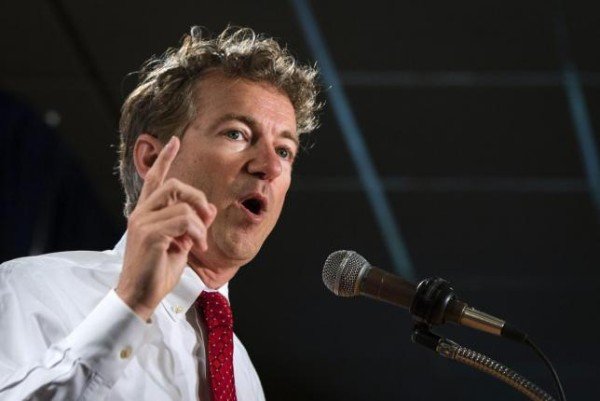 Rand Paul, seen as representing the Libertarian wing of the Republicans, ran for the party’s presidential nomination in the 2016 election but dropped out after a fifth place finish in the Iowa caucuses.

An ophthalmologist, Rand Paul represents Kentucky in the Senate and is the son of former Congressman Ron Paul, who ran for president several times. The Republican wrote on his website: “I am running for president to return our country to the principles of liberty and limited government.”

Rand Paul stands out from the Republican pack because of his comparatively libertarian views.

He becomes the second Republican to enter the contest that concludes in November 2016.

A first-term senator hailing from one of the country’s most well-known libertarian families, Rand Paul first held elected office when he rode a wave of Tea Party popularity to the US senate in 2010. Once there, Rand Paul soon drew attention when he spoke for more than 12 hours in protest about President Barack Obama’s drone policy and the nomination of John Brennan to lead the CIA.

He has proven to be a thorn in the side of many of his fellow Republicans, openly challenging them on issues such as government surveillance, drone policies and sanctions on Iran and Cuba.

Rand Paul has also questioned the size of the US military and proposed relaxing drug laws that lock up offenders at a high cost for tax payers.

It is not clear how successful Rand Paul will be amongst mainstream Republican supporters.

His father, former member of the US House of Representatives Ron Paul, ran several unsuccessful presidential campaigns that had strong appeal to libertarians who favor limited government and lower taxes.

Rand Paul is expected, however, to run a very tech-savvy campaign that could create appeal to new Republican demographics, like young voters.

He is due to make his announcement in person in a ballroom in Louisville, Kentucky, on April 7. He joins Senator Ted Cruz as the two most prominent declared candidates.

Rand Paul could face up to 20 other fellow Republicans doing battle for the nomination, including former Florida Governor Jeb Bush and Wisconsin Governor Scott Walker, both of whom are expected to enter the race soon.

The triumphant individual is widely expected to battle with Hillary Clinton, the Democratic favorite and former US Secretary of State.

Hillary Clinton has yet to officially announce her candidacy, but is expected to do so in the next two weeks.

Rand Paul attended Baylor University, but did not graduate.

Rand Paul lives in Bowling Green, Kentucky, with his wife Kelly and their three sons.

Millions of Americans are preparing to vote in midterm elections which will decide who controls the Senate and pave the way for the 2016 race for the White House.

The Republicans, who already control the House of Representatives, need to gain just six seats to take the Senate.

Meanwhile the Democrats are battling to stay ahead as President Barack Obama’s approval ratings fall to the lowest they have been since he was elected.

Many analysts predict a Republican victory as Barack Obama’s popularity rate fails to climb much above 40%, despite recent improvements in the economy.

“This is a referendum on the president,” Republican senator and potential 2016 presidential candidate Rand Paul told NBC’s Meet the Press at the weekend.

Democrats say their proven ability to rally their supporters ahead of elections could still give them the advantage.

“Grab everybody you know, get them out to vote, don’t stay home, don’t let somebody else choose your future for you,” Barack Obama said during a campaign rally on November 2. They also typically favor the party that is not in power.

This year, a little over a third of the 100-seat Senate, all 435 members of the House of Representatives, 36 out of 50 state governors, and countless state and local offices are up for election.

The most closely watched action will be the races that will determine control of the upper chamber of Congress, the Senate.

The Democrats currently hold a five-seat majority in the Senate, meaning the Republicans need only six seats to take control.

As the Republicans already have a convincing hold over the lower House of Representatives, a win in the Senate would give them the power to shut down Barack Obama’s policies in the last two years of his term.

Aside from Barack Obama’s unpopularity, there is no single issue that dominates this midterm poll.

Instead voters will be swayed by a broad variety of concerns including the economy, the environment, immigration, foreign policy, abortion and healthcare.

The most competitive Senate races are expected to take place in the states of North Carolina, Arkansas, Colorado, Georgia, Iowa and Kansas.

Across the board, voters have expressed their dissatisfaction with both parties’ inability to co-operate in Congress and the resulting gridlock this has caused.

If the Republicans do win control of the Senate, the day-to-day running of the chamber will become the responsibility of Senate Minority Leader Mitch McConnell, should he win his own tough campaign for re-election.

As the country then shifts its focus to the 2016 presidential election, Barack Obama is likely to find it increasingly hard to operate as his term draws to a close, analysts say.

Former White House intern Monica Lewinsky, whose affair with President Bill Clinton lead to his impeachment in the US Senate, has broken her long silence in the media.

President Bill Clinton “took advantage” of her, Monica Lewinsky writes, though she describes their relationship as consensual.

In 1998, Republicans failed in their effort to oust him from office on the grounds he had lied about the affair.

With Hillary Clinton said to be mulling a 2016 run for the presidency, the Lewinsky matter has remerged in US political discourse, in part because Republicans are eager to wield it against her.

In an advance excerpt of the article released by Vanity Fair, Monica Lewinsky writes she hopes to reclaim her story and says she is still recognized every day and sees her name thrown about in pop culture and the news media.

“I, myself, deeply regret what happened between me and President Clinton,” Monica Lewinsky writes.

“Let me say it again: I. Myself. Deeply. Regret. What. Happened.”

Monica Lewinsky writes that she suffered abuse and humiliation after the scandal broke in 1998, in part because she was made a “scapegoat” to protect the president.

“The Clinton administration, the special prosecutor’s minions, the political operatives on both sides of the aisle, and the media were able to brand me,” she wrote.

“And that brand stuck, in part because it was imbued with power.”

Arguing Bill Clinton had lied to federal investigators about his relationship with Monica Lewinsky, who was in her early 20s, the Republicans in the House of Representatives impeached the president, essentially bringing him up on charges in the Senate to determine whether he could be expelled from office.

That effort failed, and Bill Clinton served in the White House until his term ended in 2000.

Hillary Clinton, meanwhile, went on to be elected US senator and to serve as secretary of state under President Barack Obama, and is currently tipped as a frontrunner for the Democratic 2016 presidential nomination.

The Republicans have indicated recently that Bill Clinton’s affair with Monica Lewinsky will be fair game should Hillary Clinton indeed run.

Republican Senator Rand Paul – also tipped to run for the presidency in 2016 – said this year that “bosses shouldn’t prey on young interns in their office”.

Bill Clinton “took advantage of a girl that was 20-years-old and an intern in his office”, Rand Paul added.

“There is no excuse for that and that is predatory behavior.”

In her piece, Monica Lewinsky signals that her desire in breaking her silence after so many years is to “give a purpose” to her past.

“Perhaps by sharing my story, I reasoned, I might be able to help others in their darkest moments of humiliation,” she writes.

Monica Lewinsky now aims “to get involved with efforts on behalf of victims of online humiliation and harassment and to start speaking on this topic in public forums”.

Rand Paul , a possible Republican presidential candidate, said he and the conservative activist group FreedomWorks filed the suit for themselves and on behalf of “everyone in America that has a phone”.

The lawsuit argues that the bulk collection program that’s been in existence since 2006 violates the US Constitution’s Fourth Amendment right against unreasonable searches. It calls for an end to the program, which was revealed by former NSA analyst Edward Snowden.

The Obama administration maintains that the program, begun under President George W. Bush, is legal. Courts have largely sided with the government. President Barack Obama has called for reforms to the program in an effort to regain public trust. Others, like Rand Paul, have called for the end of this kind of surveillance.

Rand Paul dodged a question about his presidential ambitions during a news conference Wednesday. But his lawsuit is the latest effort to propel the debate over the once-secret surveillance program into the 2016 presidential campaign.

The surveillance debate has exposed intra-party tensions for Republicans. The party split on this issue between its leadership, which backs the program on security grounds, and libertarian-minded members who are more wary of government involvement in Americans’ private lives.

The Republican National Committee last month approved a resolution to end the surveillance programs. While some Republicans played down its significance, the nonbinding vote was seen as a nod to Republicans like Rand Paul.

The White House and Justice Department did not comment on the lawsuit specifically, but said they believe the bulk collection of phone records is legal.