Proposition 8, known as Prop 8, that interdicts same-sex marriage in California, was declared unconstitutional by the 9th U.S. Circuit Court of Appeals on Tuesday, February 7.

A lower court judge declared in 2010 that Prop 8 violated the civil rights of homosexuals and a three-judge panel of the federal appeals court ruled 2-1 that the judge correctly interpreted the U.S. Constitution.

“Although the Constitution permits communities to enact most laws they believe to be desirable, it requires that there be at least a legitimate reason for the passage of a law that treats different classes of people differently. There was no such reason that Proposition 8 could have been enacted,” said the court.

“Proposition 8 serves no purpose, and has no effect, other than to lessen the status and human dignity of gays and lesbians in California, and to officially reclassify their relationships and families as inferior to those of opposite-sex couples,” wrote  Judge Stephen Reinhardt.

It was the first time when an American jurist’s sexual orientation was mentioned as a motive for ruling against a court decision.

There is no evidence that former Chief U.S. Judge Vaughn Walker was subjective when he issued his decision regarding Prop 8, the federal court said.

Vaughn Walker was in a long-term relationship with another man and he brought out his sexual orientation after he retired.

Prop 8 backers  said they would appeal to the Supreme Court to declare invalid the 9th Circuit ruling.

“We are not surprised that this Hollywood-orchestrated attack on marriage — tried in San Francisco — turned out this way. But we are confident that the expressed will of the American people in favor of marriage will be upheld at the Supreme Court,” said Brian Raum, senior counsel for the Alliance Defense Fund, a Christian legal aid group.

Although the 9th U.S. Circuit Court of Appeals has jurisdiction in nine western states, it issued a decision that applies only to California.

“We emphasize the extraordinary significance of the official designation of ‘marriage’. That designation is important because ‘marriage’ is the name that society gives to the relationship that matters most between two adults. A rose by any other name may smell as sweet, but to the couple desiring to enter into a committed lifelong relationship, a marriage by the name of ‘registered domestic partnership’ does not,” said the court mentioning Shakespeare.

“Whether under the Constitution same-sex couples may ever be denied the right to marry, a right that has long been enjoyed by opposite-sex couples, is an important and highly controversial question. We need not and do not answer the broader question in this case,” said the court. 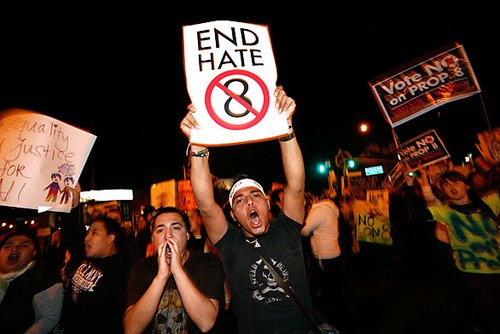 Prop 8 was declared unconstitutional by a federal court of appeal.

In November 2008 Prop 8 was voted by 52% of California voters, after in June 2008 California Supreme Court had legalized same-sex marriage.

The one man-one woman marriage provision was inserted into the California Constitution. It was the first interdiction to take away marriage rights from same-sex couples, after the rights were already established. The most expensive campaign on a social issue in the nation’s history has followed.

Around 18,000 same- sex couples married during the four-month window before Prop 8 took effect, estimated the Williams Institute on Sexual Orientation and the Law.

The California Supreme Court confirmed those marriages but decided that voters had properly enacted the law.

If and when same-sex marriages might resume in California remain unclear. Prop 8 sponsors have a deadline to appeal to a larger panel and this court’s ruling would remain on hold until it’s resolved, if an appeal is filed.