Jerry Sandusky has been found guilty of sexually abusing young boys while he was an assistant coach of the Penn State football team.

Jerry Sandusky, 68, was convicted of 45 of the counts against him, and acquitted of a further three.

He is now headed to jail where he will be placed on suicide watch and could face a total sentence of up to 442 years in prison.

Jurors were sequestered for just two days while they deliberated the verdict.

The conviction of Jerry Sandusky finally brings an end to a horrific saga which has trashed the reputation of a leading public university and ended the career of its president as well as its legendary head coach, Joe Paterno, who died of cancer in January.

After the verdict was announced in the courtroom in Bellefonte, Pennsylvania, Jerry Sandusky’s bail was revoked and he was taken to the Center County Correctional Facility.

Jerry Sandusky plans to appeal against his conviction, according to one of his defense lawyers.

He showed little emotion as the verdict was read. The judge ordered him to be taken to the county jail to await sentencing in about three months.

In court, Jerry Sandusky half-waved toward family as the sheriff led him away. Outside, he calmly walked to a sheriff’s car with his hands cuffed in front of him.

As he was placed in the car, someone yelled at him to “rot in hell”. Others hurled insults and he shook his head in response. 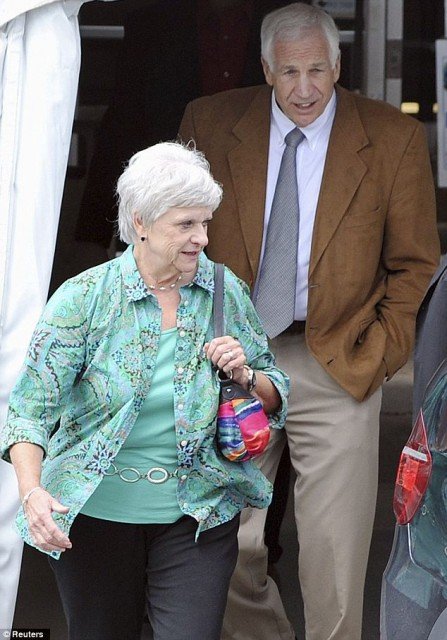 She says the trial was forced on them and that she hoped the verdict “helps these victims heal… and helps other victims of abuse to come forward”.

Almost immediately after the judge adjourned, loud cheers could be heard from at least a couple of hundred people gathered outside the courthouse as word quickly spread that Jerry Sandusky had been convicted.

Eight young men testified in a central Pennsylvania courtroom about a range of abuse.

For two other alleged victims, prosecutors relied on testimony from a university janitor and then-graduate assistant Mike McQueary.

Jerry Sandusky did not take the stand in his own defense.

After the verdict was announced, defense attorney Karl Rominger said it was “a tough case” with a lot of charges and that an appeal was certain. He said the defense team “didn’t exactly have a lot of time to prepare”.

Jerry Sandusky’s former employer, Penn State, which has been dealt a damaging blow to its reputation by the scandal, released a statement after his conviction was announced.

“The legal process has spoken and we have tremendous respect for the men who came forward to tell their stories publicly,” the university said.

“No verdict can undo the pain and suffering caused by Mr. Sandusky, but we do hope this judgment helps the victims and their families along their path to healing.”

The statement added that Penn State had “established a confidential counseling process for victims of Mr. Sandusky’s conduct” and taken other steps to stamp out sexual abuse on campus.

In an apparent attempt to limit the institution’s legal liabilities in the light of the verdict, the statement continued: “The University plans to invite victims of Mr. Sandusky’s abuse to participate in a programme to facilitate the resolution of claims against the University arising out of Mr. Sandusky’s conduct.”

The ex-coach had repeatedly denied the allegations, and his defense suggested that his accusers had a financial motive to make up stories, years after the fact.

His attorney also painted Jerry Sandusky as the victim of overzealous police investigators who coached the alleged victims into giving accusatory statements.

Jerry Sandusky had initially faced 52 counts of sex abuse. The judge dropped four counts during the trial, saying two were unproven, one was brought under a statute that didn’t apply and another was duplicative.

Earlier on Friday, his lead defense attorney told reporters that he would be stunned and “probably die of a heart attac” if his client were acquitted of all 48 counts.

The impromptu remarks by Joe Amendola lasted about 15 minutes inside the courtroom and opened a wide window into the defendant’s state of mind as he and Dottie Sandusky anxiously awaited a verdict.

Joe Amendola said that in anticipation of a verdict, the Sanduskys were spending a lot of time praying. He described the atmosphere at their home as funereal.

On Friday, jurors listened again to testimony from a key prosecution witness against the former Penn State assistant football coach, then went back behind closed doors for a second day of deliberations.

The jury had talked for more than eight hours on Thursday before adjourning at the end of a long session that featured dueling portrayals of Jerry Sandusky as either a “predatory pedophile” or the victim of a conspiracy between investigators and his accusers.