Here’s a complete list of all the winning and nominated stars and films at this year’s Academy Awards.

Green Book sprang a surprise by winning the award for best picture at this year’s ceremony in Los Angeles.

Olivia Colman defied the odds to scoop an Oscar for best actress for her role in The Favourite and charmed viewers with a funny and tearful speech.

Green Book won three awards in total, including best picture, which had been expected to go to Netflix’s Roma.

Bohemian Rhapsody won the most awards in total with four, while Roma and Black Panther also won three each.

Olivia Colman, who started out as a sidekick in TV sitcoms like Peep Show, was in shock when her name was called.

Glenn Close had been the firm favorite for her role in The Wife – and now has the unenviable record of seven nominations without a win.

Olivia Colman is the first British actress to win the prize since Kate Winslet in 2009.

The four awards for Bohemian Rhapsody, the authorized biopic of Queen and Freddie Mercury, included best actor for Rami Malek, who won rave reviews for playing the late singer.

It was later reported that Rami Malek, 37, fell off the stage after the ceremony concluded and had to be helped into a seat by security staff.

He was reportedly attended to by paramedics, though he made no reference to the incident later when he spoke to reporters backstage.

Oscars 2019: This Year’s Ceremony Goes Without Host After 30 Years

Mahershala Ali won his second best supporting actor Oscar in three years. He won for Moonlight in 2017 and has now won for playing jazz pianist Don Shirley in Green Book.

Green Book tells the story of Don Shirley’s tour to the racially segregated US Deep South in the 1960s, but its chances had been thought to have been dented by a series of controversies.

Meanwhile, a tearful Regina King won best supporting actress for If Beale Street Could Talk, from what was her first Oscar nomination.

However, Mark Ronson shared the best song award with Lady Gaga, among others.

Paul Lambert and Tristan Myles shared the prize for best visual effects with two American colleagues for creating the rocket-rattling effects on First Man, about the first Moon landing.

The Oscars failed to find a main host this year after comedian Kevin Hart pulled out following a row about old homophobic tweets.

Instead of having the traditional opening monologue, Tina Fey, Maya Rudolph and Amy Poehler appeared to introduce the show as well as presenting the first award.

“We are not your hosts this year but if we had hosted, it probably would have gone like this,” Tina Fey said – before the trio launched into a sketch poking fun at some of the nominees, which is one of the host’s usual jobs.

The ceremony continued to rely on a procession of stars presenting individual awards.

However, it didn’t obviously suffer from the lack of an overarching host, and it helped the event move along.

Queen, fronted by singer Adam Lambert, had opened the ceremony with a bombastic medley of We Will Rock You and We Are the Champions as A-listers waved and clapped along in their seats.

Arqiva British Academy Television Awards (BAFTAs) was all about one woman on Sunday night – Olivia Colman.

Ant and Dec – I’m a Celebrity… Get Me Out of Here!

Female Performance In A Comedy Programme: 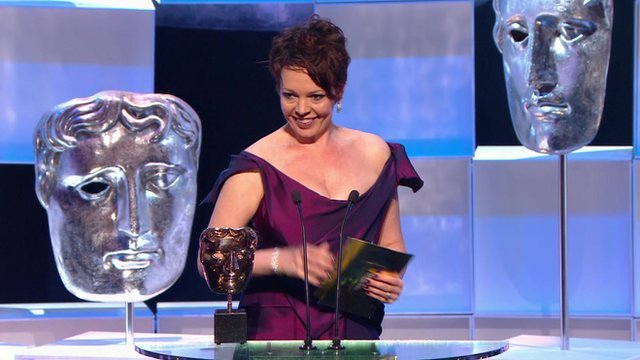 Arqiva British Academy Television Awards was all about one woman on Sunday night, Olivia Colman

Male Performance In A Comedy Programme:

Peter Capaldi – The Thick of It

Steve Coogan – Welcome to the Places of My Life

Room at the Top

All in the Best Possible Taste with Grayson Perry

The Plot to Bring Down Britain’s Planes

The Secret History of Our Streets

Baka: A Cry from the Rainforest

The Great British Bake Off

Paul O’Grady: For the Love of Dogs

I’m a Celebrity… Get Me Out of Here!

The Other Side of Jimmy Savile (Exposure)

The Shame of the Catholic Church (This World)

Have I Got News For You

A League of Their Own

The Revolution Will Be Televised

Welcome to the Places of My Life

The Thick of It

The Great British Bake Off

Olivia Colman was the big winner at BAFTA Television Awards 2013, taking the prizes for best supporting actress for Accused and best female in a comedy programme for Twenty Twelve.

Olivia Colman said of her win for Accused: “Turns out it does mean a lot. And I’m not going to cry.”

The Paralympics beat the BBC’s coverage of the Olympic opening ceremony, Super Saturday and the men’s Wimbledon final.

Olivia Colman thanked Accused writer Jimmy McGovern and paid tribute to co-star Anne Marie Duff, adding: “If it’s alright with everyone, it’s for Anne Marie and me to share – we’re Anne Malivia Colemuff, we did it together and I couldn’t have done it without her to play off.”

When she collected her second award for Twenty Twelve, Olivia Colman praised her fellow nominees Miranda Hart, Jessica Hynes and Julia Davis, joking: “I’m not even the funniest one in our own programme.”

A tearful Sheridan Smith won best lead actress for ITV drama Mrs. Biggs, based on the true story of the wife of the Great Train Robber, Ronnie Biggs. She thanked the whole team behind the show, apologizing for her tears, adding: “I can’t believe it.” 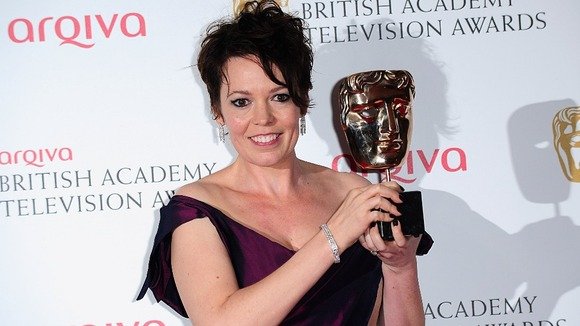 Olivia Colman was the big winner at BAFTA Television Awards 2013, taking the prizes for best supporting actress for Accused and best female in a comedy programme for Twenty Twelve

The actor, who also played the role of Q in the James Bond film Skyfall, said: “I’m really, really surprised, I was hoping it would be one of the others just so I wouldn’t have to come up here and say anything. I’m thrilled, it’s amazing – I can’t believe it.”

Michael Palin, who was presented with a BAFTA fellowship by fellow Monty Python member Terry Jones, said: “This is a fantastic honor for which I feel deeply unworthy. It is an award for thoroughly enjoying myself for the last 48 years.”

He also thanked the BBC, saying: “No other broadcasting company in the world would have given me the opportunity to do what I’ve done.”

Clare Balding, who won a BAFTA Special Award, said she was “aware this would not have happened if it weren’t for the magic of last summer”, referring to the 2012 Games, when she presented for both the BBC’s Olympic and Channel 4’s Paralympic coverage.

“I’m so grateful to the BBC and Channel 4 for putting me at the heart of those events,” she said, before tearfully thanking her parents and her partner.

Anne Reid, who starred in Last Tango with Sir Derek Jacobi, said: “I’m so happy that the BBC at last have decided to do love stories about people who are over 35. Some of us do have quite interesting lives when we get to 70.”

Room at the Top won best mini-series, beating Accused, Mrs. Biggs and Parade’s End and The Great British Bake Off won best features. Alfred Hitchcock drama The Girl had been up for four BAFTAs but left empty-handed.

Graham Norton hosted the ceremony at London’s Royal Festival Hall, where he won best entertainment performance for The Graham Norton show. He thanked the BBC, the guests and his team, who he joked did not enjoy being up on stage.

Steve Coogan won best male performance in a comedy programme for Sky Atlantic’s Welcome to the Places of My Life. He was not there to collect his award but a message from him read: “Thanks very much, I’ve got five now… “.

BBC Three’s The Revolution Will Be Televised was named the best comedy programme.

Doctor Who’s 50th anniversary was celebrated during the ceremony with a montage of clips from the show and a sketch with the current Doctor and his assistant, played by Matt Smith and Jenna-Louise Coleman.