Frankfurt, London and Paris all fell sharply at the open with losses of up to 3%, before recovering some ground.

In the US overnight the Dow Jones lost 4.6%.

The sell-off began last week after data in the United States showed stronger wage growth, which raised expectations that US interest rates might start to rise more quickly to tackle inflation. 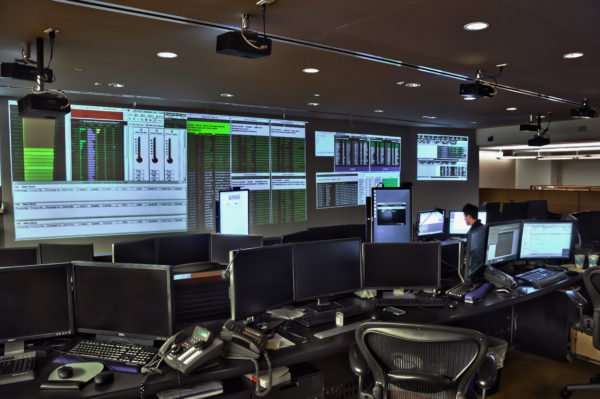 Frankfurt’s Dax and Paris’s CAC were down 2.2% and 2% respectively.

Japan’s Nikkei saw steeper falls overnight, with a loss of some 7% at one point.

Unlike elsewhere in the world, where interest rates are beginning to or are expected to start rising, Japan’s immediate economic outlook remains stagnant. The authorities there said there was little chance of interest rates being increased.

Traders returned to their desk in the aftermath of Friday’s rout to another bout of selling.

The decline was the largest in percentage terms for the Dow since August 2011, when markets dropped in the aftermath of “Black Monday” – the day Standard & Poor’s downgraded its credit rating of the US.

The drop on the Dow Jones was closely followed by the wider S&P 500 stock index, down 4.1% and the technology-heavy NASDAQ, which lost 3.7%.

However, the White House reassures investors saying it was focused on “long-term economic fundamentals, which remain exceptionally strong”. Data from the US showed retail sales and producer prices both fell in September, dimming expectations of an interest rate hike by the central bank.

Japan’s shares fell more than 2% to a four-and-a-half-month low. Among the losers were shares of Toyota, down over 2% after the automaker issued a recall of 1.75 million vehicles on Wednesday.

On the mainland, the Shanghai Composite fell 0.5% to 2,451.65 points after data showed that the rate of inflation in September fell, adding to evidence of a slowing economy.

The benchmark Kospi was down 0.7% after the Bank of Korea cut its interest rate for the second time in three months on October 15, and also downgraded its growth forecasts for the economy for this year.