Iota made landfall as a category four storm near the town of Puerto Cabezas, where patients had to be evacuated from a makeshift hospital after its roof was ripped off.

Residents are in shelters, and there are fears of food shortages.

Iota has weakened and Honduras is expected to be hit on November 17.

According to the US National Hurricane Center (NHC), Iota was now a category two storm, but warned it could bring life-threatening storm surges, catastrophic winds, flash flooding and landslides.

The hurricane struck Nicaragua on November 16 with sustained winds of nearly 155mph , the NHC said. It strengthened at sea to a category five storm but it weakened as it made landfall.

In Puerto Cabezas, also known as Bilwi, Iota damaged wooden homes, flooded streets and cut off electricity. Residents said the wind ripped away the roofs of houses “like they were made of cardboard”.

There were no immediate reports of casualties. Nicaraguan officials said around 40,000 people had been evacuated from areas in the storm’s path.

“[Iota] is the strongest hurricane that has touched Nicaraguan soil since records began,” said Marcio Baca, director of the Nicaraguan Institute of Earth Studies.

Hurricanes and Home Insurance – What All Homeowners Should Know

Hurricane Iota is forecast to move inland across the country before hitting southern Honduras. The effect of the rains could be particularly devastating in areas already drenched by Hurricane Eta. Iota made landfall just 15 miles south of where Eta hit on November 3.

In Honduras, officials said at least 50,000 people had been removed from high-risk areas. Speaking at a news conference on November 16, President Juan Orlando Hernández warned: “What’s drawing closer is a bomb.”

Before reaching Central America the storm moved past the Colombian island of Providencia in the Caribbean, cutting off electricity and killing at least one person, officials said.

Colombian President Iván Duque said 98% of the infrastructure in Providencia, home to around 5,000 people, had been damaged.

Iota is the strongest Atlantic hurricane of the year and only the second November hurricane to reach category five – the last was in 1932.

At least 22 people have been killed in Costa Rica, Nicaragua and Honduras as Tropical Storm Nate moves north towards the US.

A state of emergency has been declared in the Central American countries, where more than 20 people are missing.

In Costa Rica, nearly 400,000 people are without running water and thousands are sleeping in shelters.

At least 8 people have died in the storm there, while another 11 were killed when it moved north and reached Nicaragua, where as much as 15ins of rain had been predicted to fall by the US’s National Hurricane Center.

Three people have been killed in Honduras, including two youths who drowned in a river, and several are reported missing.

One man was also reportedly killed in a mudslide in El Salvador, according to emergency services.

On October 5, all train journeys were suspended and dozens of flights canceled in Costa Rica.

More than a dozen national parks popular with tourists have been closed as a precaution.

Nicaragua’s VP Rosario Murillo advised people to be cautious in the heavy rains.

“Sometimes we think we think we can cross a river and the hardest thing to understand is that we must wait,” he said on state radio.

“It’s better to be late than not to get there at all.”

According to the National Hurricane Center, the storm was expected to move off the eastern coast of Honduras at 23:00 ET on October 5.

Forecasters say Nate will gain strength and become a category one hurricane before it makes landfall on the southern coast of the United States on October 8.

Residents from Florida to Texas have been told to prepare for the storm, which, if it does strike, might be the third major storm to hit the southern coast his year.

Both Texas and Florida are still recovering from the damage inflicted by Hurricane Harvey, which hit the former in August and caused “unprecedented damage”, and Hurricane Irma, which made landfall in Florida in September.

A state of emergency was declared in 29 Florida counties, and in New Orleans in Louisiana.

He tweeted: “There is no need to panic.

“Be ready and prepare. Get a plan. Prepare to protect your personal property.”

Oil companies operating in the Gulf of Mexico says they are evacuating staff from platforms which lie along the predicted path of Tropical Storm Nate.

Caribbean storm Otto has been upgraded to a hurricane and is threatening Costa Rica and southern Nicaragua, forecasters say.

Forecasters warned that Hurricane Otto may have winds of 90 mph when it makes landfall early on November 24.

At least four people have already died in Panama in severe weather caused by the approach of the storm.

Otto is moving west at 2 mph after being almost stationary throughout November 22, experts say. 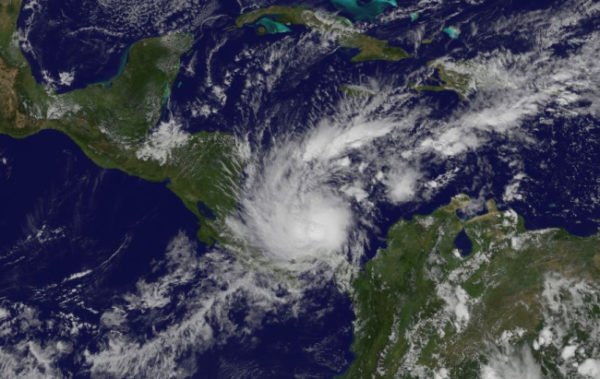 According to the US National Hurricane Center, Otto is now blowing at about 75 mph as it approaches northern Costa Rica and southern Nicaragua.

The storm is now centered east of Limon, Costa Rica. When it makes landfall on November 24 its heavy rain is expected to create numerous mudslides. It is then expected to cross over into the Pacific.

The Washington Post says that very few hurricanes have formed so late in the season – which ends on 30 November – and that across the Atlantic since 1851 only 35 storms have reached tropical storm intensity on or after November 15.

Earlier in Panama two people died in a mudslide; a girl drowned in a river and a boy died when a tree fell on a car taking him to school. His mother, who was driving, survived.

According to officials, about 50 homes were destroyed by mudslides and flights were delayed.

The governments of Nicaragua and Costa Rica have issued a hurricane watch from Costa Rica’s southern border to the city of Bluefields in Nicaragua.

There is also a likelihood of dangerous surf and rip current conditions over the next few days along the coasts of Panama, Costa Rica and Nicaragua, officials say.

Nicaragua’s President Daniel Ortega appeared in public after a 10-day absence which had led to rumors about his health.

Referring to the rumors, the president told the cardinal he had “carried out the miracle of resurrecting me because a lot people thought I was dead”.

Daniel Ortega, a former Sandinista rebel, is serving his third term in office.

There had been feverish speculation about his state of health after he began missing official ceremonies after February 21.

On February 26, Daniel Ortega had been expected to attend an event commemorating the 1978 indigenous uprising in Monimbo, in which his brother was killed.

The following day, Ecuadorean President Rafael Correa cancelled a planned trip to Nicaragua, citing scheduling problems on the side of the Nicaraguan government.

Some rumors circulated on social media saying Daniel Ortega had health problems and was receiving treatment in Cuba, while others said he had died days previously on the Communist-run island.

About 3,000 people are being evacuated in Nicaragua from areas near the San Cristobal volcano, which is spewing ash and gas, the government says.

Soldiers have been sent to the region, northwest of the capital Managua, after the government ordered local communities to leave.

The volcano began erupting on Saturday morning, shortly after powerful explosions were heard.

About 3,000 people are being evacuated in Nicaragua from areas near the San Cristobal volcano, which is spewing ash and gas

The 1,745-meter volcano (5,700-foot) is the highest mountain in Nicaragua and one of the most active along the Pacific Coast of Nicaragua.

It has launched a 4 km-high (2.5-mile) column of ash and smoke into the atmosphere.

Jaime Mejia, from Nicaragua’s Institute of Territorial Studies, said there was “strong activity” in the volcano, which had a series of small eruptions in 2008.

“We do not rule out anything, but call for calm,” he told the AP news agency.

Civil defence officers have been sent to the Chinandenga and Leon provinces to help the evacuation.

But hundreds of residents left the area even before their arrival.

Nicaragua has been on alert since an earthquake hit neighboring Costa Rica last week.

Aftershocks were felt across the two Central American countries.