Alan Turing, the British mathematical genius and codebreaker born on June 23, 1912, may not have committed suicide, as is widely believed.

At a conference in Oxford on Saturday, Alan Turing expert Prof. Jack Copeland will question the evidence that was presented at the 1954 inquest.

Prof. Jack Copeland believes the evidence would not today be accepted as sufficient to establish a suicide verdict.

Indeed, he argues, Alan Turing’s death may equally probably have been an accident.

What is well known and accepted is that Alan Turing died of cyanide poisoning.

His housekeeper famously found the 41-year-old mathematician dead in his bed, with a half-eaten apple on his bedside table.

It is widely said that Alan Turing had been haunted by the story of the poisoned apple in the fairy tale of Snow White and the Seven Dwarves, and had resorted to the same desperate measure to end the persecution he was suffering as a result of his homosexuality.

But according to Prof. Jack Copeland, it was Alan Turing’s habit to take an apple at bedtime, and that it was quite usual for him not to finish it; the half-eaten remains found near his body cannot be seen as an indication of a deliberate act.

Indeed, the police never tested the apple for the presence of cyanide.

Moreover, Prof. Jack Copeland emphasizes, a coroner these days would demand evidence of pre-meditation before announcing a verdict of suicide, yet nothing in the accounts of Alan Turing’s last days suggest he was in anything but a cheerful mood. 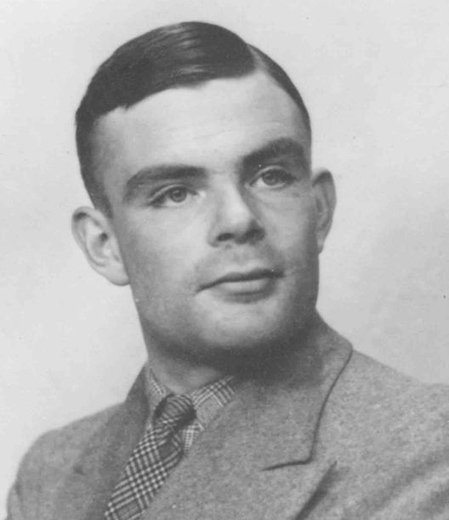 Alan Turing, the British mathematical genius and codebreaker born on June 23, 1912, may not have committed suicide, as is widely believed

Alan Turing had left a note on his office desk, as was his practice, the previous Friday to remind himself of the tasks to be done on his return after the Bank Holiday weekend.

Nevertheless, at the inquest, the coroner, JAK Ferns declared: “In a man of his type, one never knows what his mental processes are going to do next.”

What he meant by “of this type” is unclear.

The motive for suicide is easy to imagine. In 1952, after he had reported a petty burglary, Alan Turing found himself being investigated for “acts of gross indecency” after he revealed he had had a male lover in his house.

Faced with the prospect of imprisonment, and perhaps with it the loss of the mathematics post he held at Manchester University, which gave him access to one of the world’s only computers, Alan Turing accepted the alternative of “chemical castration” – hormone treatment that was supposed to suppress his sexual urges.

It is often repeated that the chemicals caused him to grow breasts, though Alan Turing is only known to have mentioned this once.

The authorities’ continuing interest in alan Turing became apparent in 1953 when a gay Norwegian acquaintance, Kjell, announced by postcard his intention to visit him at his Wilmslow home, but mysteriously never arrived.

Alan Turing told a friend, by way of explanation: “At one stage, the police over the north of England were out searching for him.”

With six decades of hindsight, these oppressive attentions, the nation’s failure to appreciate his wartime contributions, his apparent sidelining at the Manchester computer department, have led to a tragic picture of Alan Turing being hounded during his last years, and suicide being a natural outcome.

But Prof. Jack Copeland argues that on the contrary, Alan Turing’s career was at an intellectual high, and that he had borne his treatment “with good humor”.

Of the Kjell affair, Alan Turing had written that “for sheer incident, it rivaled the Arnold [gross-indecency] story”; and immediately after his conviction had told a friend: “The day of the trial was by no means disagreeable.

“Whilst in custody with the other criminals, I had a very agreeable sense of irresponsibility, rather like being back at school.”

On the face of it, these are not the expressions of someone ground down by adversity.

What is more, Alan Turing had tolerated the year-long hormone treatment and the terms of his probation (“my shining virtue was terrific”) with amused fortitude, and another year had since passed seemingly without incident.

In statements to the coroner, friends had attested to his good humor in the days before his death.

His neighbor described him throwing “such a jolly [tea] party” for her and her son four days before he died.

His close friend Robin Gandy, who had stayed with him the weekend before, said that Alan Turing “seemed, if anything, happier than usual”.

Yet the coroner recorded a verdict of suicide “while the balance of his mind was disturbed”.

Prof. Jack Copeland believes the alternative explanation made at the time by Alan Turing’s mother is equally likely.

Alan Turing had cyanide in his house for chemical experiments he conducted in his tiny spare room – the nightmare room he had dubbed it.

He had been electrolyzing solutions of the poison, and electroplating spoons with gold, a process that requires potassium cyanide. Although famed for his cerebral powers, Turing had also always shown an experimental bent, and these activities were not unusual for him.

The electrolysis experiment was wired into the ceiling light socket.

On another occasion, an experiment had resulted in severe electric shocks.

And he was known for tasting chemicals to identify them.

Perhaps he had accidentally put his apple into a puddle of cyanide.

Or perhaps, more likely, he had accidentally inhaled cyanide vapors from the bubbling liquid.

Prof. Jack Copeland notes that the nightmare room had a “strong smell” of cyanide after Turing’s death; that inhalation leads to a slower death than ingestion; and that the distribution of the poison in Alan Turing’s organs was more consistent with inhalation than with ingestion.

In his authoritative biography, Andrew Hodges suggests that the experiment was a ruse to disguise suicide, a scenario Alan Turing had apparently mentioned to a friend in the past.

But Jack Copeland argues the evidence should be taken at face value – that an accidental death is certainly consistent with all the currently known circumstances.

The problem, he complains, is that the investigation was conducted so poorly that even murder cannot be ruled out. An “open verdict”, recognizing this degree of ignorance, would be his preferred position.

None of this excuses the treatment of Alan Turing during his final years, says Prof. Jack Copeland.

“Turing was hounded,” he said.

Adding: “Yet he remained cheerful and humorous.”

“The thing is to tell the truth in so far as we know it, and not to speculate.

“In a way we have in modern times been recreating the narrative of Turing’s life, and we have recreated him as an unhappy young man who committed suicide. But the evidence is not there.

“Perhaps we should just shrug our shoulders, and focus on Turing’s life and extraordinary work.”