Disabled Chinese land rights lawyer Ni Yulan and her husband Dong Jiqin have been jailed a year after they were detained.

Ni Yulan was sentenced to two years and eight months, while her husband was handed a two-year term.

The couple is known for providing legal help to people whose homes have been seized by the government.

They were jailed on charges of “picking quarrels, provoking trouble and willfully destroying private and public property”, a court spokesman said.

Ni Yulan and Dong Jiqin were detained last April as authorities rounded up scores of activists amid online calls for protests similar to those taking place at the time in the Arab world. 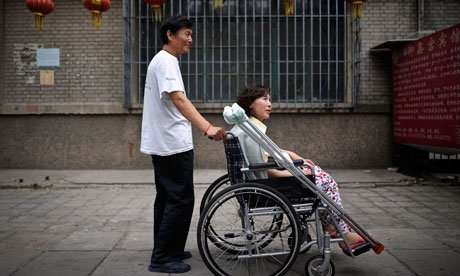 Their trial took place in December 2011, with the hearing closed to the press and foreign diplomats.

Their supporters said charges were meant to silence them and the trial was a sign of China’s growing intolerance of dissent.

Their daughter, Dong Xuan, told reporters then that the trial had been “a very abnormal legal process”.

“This is completely unfair, I urge the government to release my parents,” Dong Xuan told AFP news agency after the sentencing on Tuesday.

“Both my parents looked very thin. I was unable to see my mother’s face, she didn’t turn around. She was in a wheelchair and looked very weak. My father saw me and asked me how I was. He told me that he was OK.”

Ni Yulan’s fight against land grabs began in 2002 after her home in central Beijing was requisitioned and later demolished.

She has been banned from working as a lawyer but she and her husband have continued to advise others whose land has been seized.

Ni Yulan, 51, was sentenced to a year in jail in 2002 for “obstructing official business” and to two years’ imprisonment in 2008 for “harming public property”.

She uses a wheelchair – a consequence, she and her supporters say, of mistreatment by police.

Amnesty International said Ni Yulan’s kneecaps and feet were broken during her detention in 2002. She has also described the ill treatment by authorities in media interviews, saying that she was pinned down and kicked until she was not able to walk.