The Matrix will return for its fourth installment, with Keanu Reeves reprising his lead role as hacker Neo.

Matrix co-creator Lana Wachowski will write, direct and produce the film, a third sequel to the original 1999 hit.

Lana Wachowski celebrated The Matrix‘s return, saying many of the ideas it explores are “even more relevant now”.

The first three films in the sci-fi franchise earned more than $1.6 billion at the global box office.

Warner Bros Pictures Group chairman Toby Emmerich announced the fourth film on August 20, saying the studio “could not be more excited” about its return.

He said: “Lana is a true visionary – a singular and original creative filmmaker – and we are thrilled that she is writing, directing and producing this new chapter.”

Judge R Gary Klausner: No substantial similarity between Matrix trilogy and The Immortals

The original film was released in 1999 and told the story of Neo and his discovery that humanity was trapped in a simulated reality. It proved a major hit and spawned two sequels – The Matrix Reloaded and The Matrix Revolutions.

The third installment, The Matrix Revolutions, was the first film ever to be released simultaneously around the world at the same hour.

Rumors of a fourth chapter have been circulating since two years ago, with reports at the time stating that Warner Bros was “in the early stages of developing a re-launch”.

In a statement on August 20, Lana Wachowski said she was “very happy to have these characters back in my life and grateful for another chance to work with my brilliant friends”.

When Keanu Reeves hit the Cannes scene on Sunday, it came as a shock to see the Hollywood hunk look anything less than handsome.

Keanu Reeves, 48, stepped onto a yacht looking bloated and aged.

The actor usually adorns his face and neck with grizzly facial hair, but Keanu went for a clean shaven look that revealed a drooping jaw and neckline.

Attempting to hold onto his Bill and Ted’s Excellent Adventures youth, the star wore his black locks long in a beach-boy style that only acted as a harsh contrast to his ageing face. 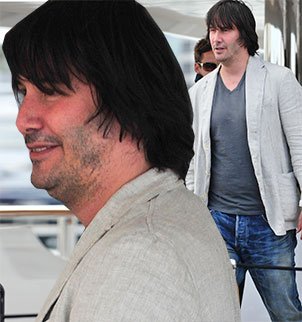 When Keanu Reeves hit the Cannes scene on Sunday, it came as a shock to see the Hollywood hunk look anything less than handsome

Perhaps a late night of partying caused his eyes to appear puffier than usual, but the actor looked tired nonetheless.

Further adding to his less-than-hunky appearance was a grey tight V-neck T-shirt that hugged his bloated midsection.

A cream linen blazer layered over his shirt and distressed denim, concealing part of his weight gain.

Keanu Reeves has two films that are set to be released later in 2013, both of which must have required that Keanu be in top form.

In 47 Ronin, Keanu Reeves stars as an 18th century samurai who sets out to avenge the death of his troupe’s master.

Additionally, in Man of Tai Chi, Keanu Reeves directs and stars in the film based on martial artists.

Keanu Reeves is also rumored to be in talks to star alongside Reese Witherspoon in new sci-fi film Passengers, according to The Hollywood Reporter.