Judge Amy Coney Barrett has been confirmed to the Supreme Court by the US Senate in a victory for President Donald Trump aweek before the presidential election.

Justice Barrett’s appointment seals for the foreseeable future a 6-3 conservative majority on the top US judicial body.

Senate Democratic leader Chuck Schumer said that by going ahead with the vote so close to the election the Republican majority was “lighting its credibility on fire”.

Amy Coney Barrett, 48, took the oath of office at the White House alongside President Trump.

Only one Republican, Senator Susan Collins, who faces a tough re-election battle in Maine, voted against the president’s nominee in October 26 vote.

Amy Coney Barrett is the third appointed by President Donald Trump, after Neil Gorsuch in 2017 and Brett Kavanaugh in 2018.

He said: “This is a momentous day for America, for the United States constitution and for the fair and impartial rule of law.”

The president added: “She is one of our nation’s most brilliant legal scholars and she will make an outstanding justice on the highest court in our land.”

Supreme Court Justice Clarence Thomas, a conservative, administered the oath of office to his new colleague.

Justice Amy Coney Barrett said afterwards: “A judge declares independence not only from the Congress and the president, but also from the private beliefs that might otherwise move her.

“The judicial oath captures the essence of the judicial duty: the rule of law must always control.”

She took the judicial oath in a private ceremony at the Supreme Court on October 27.

The White House ceremony took place on the south lawn of the executive mansion. It came a month after a similar event to unveil Amy Coney Barrett as the president’s nominee was linked to a Covid-19 outbreak that was followed by the president himself testing positive for the disease.

Supreme Court Judge Ruth Bader Ginsburg was discharged from the hospital following cancer surgery and is recuperating at home, a court spokeswoman has announced.

The 85-year-old had surgery to remove two cancerous nodules from her left lung in New York on December 21.

The Notorious RBG, who is the most senior justice on the Supreme Court’s liberal wing, has previously had surgery to treat colon cancer and pancreatic cancer.

Supreme Court judges serve for life or until they retire.

Supporters of Ruth Bader Ginsburg have expressed concern that if anything happened to her, she could be replaced by a conservative justice.

Supreme Court spokeswoman Kathy Arberg said in a statement: “Justice Ginsburg was discharged from the hospital yesterday [December 25] and is recuperating at home.”

According to an earlier statement released by the court, the malignant nodules were initially discovered when Ruth Bader Ginsburg broke three ribs in November.

Both were successfully removed at New York’s Memorial Sloan Kettering Cancer Center, and afterwards “there was no evidence of any remaining disease”, it added.

No further treatment is planned.

Ruth Bader Ginsburg was appointed to the Supreme Court in 1993 by President Bill Clinton.

She had previously focused her work on women’s rights and started the first law journal dedicated to the topic.

Some of her legal opinions, coupled with her refusal to step down during the Obama era, have seen her gain popularity in some quarters. 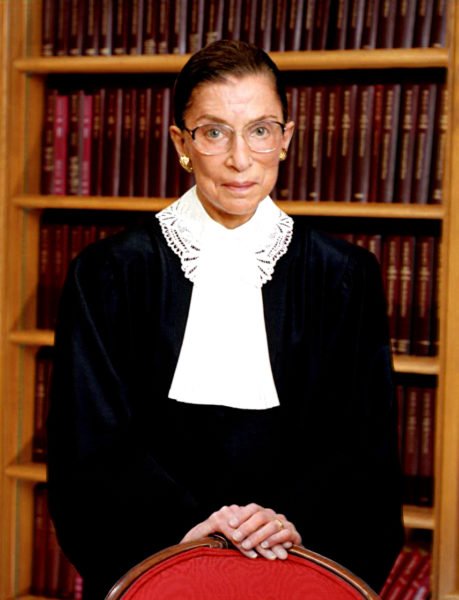 The fall happened in her office at the Supreme Court in Washington.

The 85-year-old went home but was in discomfort and went to George Washington University hospital on November 8, a statement said.

Tests showed that Ruth Bader Ginsburg had fractured three ribs on her left side and she has been admitted for observation and treatment.

It meant that the most senior justice on the court’s liberal wing was not present for November 8 investiture of Brett Kavanaugh, whose appointment led to protests following allegations of assault.

Brett Kavanaugh’s appointment, confirmed last month by the Senate, restores the nine-member court’s conservative majority. The court has the final say on issues such as abortion, gun control and voting rules.

President Donald Trump, who nominated Brett Kavanaugh and described the claims against him as a “hoax”, attended his investiture.

On Twitter, many were quick to offer Ruth Bader Ginsburg assistance in the form of extra ribs and human shields to ensure she made it through the Trump presidency.

Ruth Bader Ginsburg was appointed to the Supreme Court in 1993 by President Bill Clinton. She had previously focused her work on women’s rights and started the first law journal dedicated to the topic.

The liberal justice has survived cancer and in 2012 cracked two ribs in a fall at her home.

Some of Ruth Bader Ginsburg’s legal opinions, coupled with her refusal to step down during the Obama era, have seen her gain popularity in some quarters and earned her the nickname Notorious RBG.

Supreme Court Justice Ruth Bader Ginsburg has admitted she was not sober at the president’s State of the Union address.

Ruth Bader Ginsburg said she “couldn’t resist the fine wine” at the dinner which traditionally brings together some of the court’s justices before the speech.

At 81, Justice Ruth Bader Ginsburg is the oldest serving judge on the Supreme Court.

She was asked about the incident by the moderator at an event at George Washington University on February 13.

Justice Ruth Bader Ginsburg was repeatedly pictured slumbering in her chair as President Barack Obama addressed the joint session of Congress in the House of Representatives on January 20. 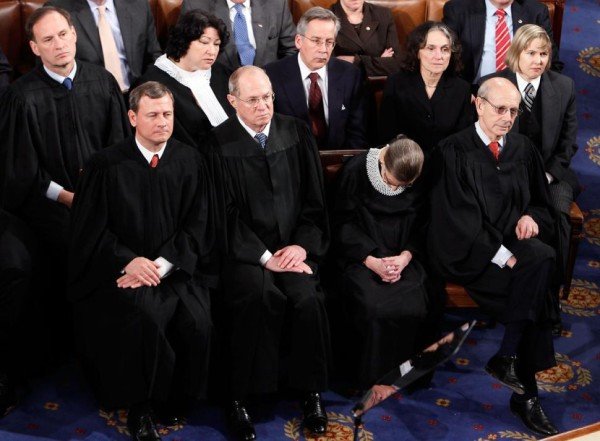 “The audience for the most part is awake, but they’re bobbing up and down all the time. And we sit there as stone-faced, sober judges. But we’re not.

“At least I wasn’t 100% sober when we went to the State of the Union,” Ruth Bader Ginsburg said, provoking audience laughter.

Justice Ruth Bader Ginsburg said she had vowed to stick to sparkling water after dozing at the speech in past years, but was unable to resist the lure of a “very fine California wine” brought by Justice Anthony Kennedy.

“In the end, the dinner was so delicious it needed wine,” she said.

Former Justice David Souter used to give her a pinch when he spotted the warning signs in years gone by, Justice Ruth Bader Ginsburg said, but the judges beside her this time were “more timid”.