Former Presidents Barack Obama, George W. Bush, Bill Clinton, George H.W. Bush and Jimmy Carter have gathered for a concert in aid of victims of the hurricanes which ravaged the US this year.

The five living former presidents appeared in Texas on October 21.

The three Democrats and two Republicans came together behind The One America Appeal, set up to help those caught up in the devastating trails of Hurricanes Harvey, Irma and Maria.

The One America Appeal has raised $31 million so far. 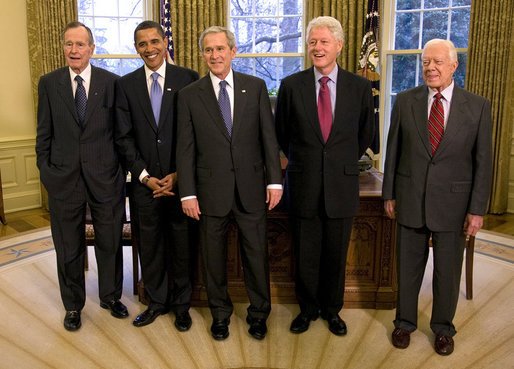 The former presidents launched the appeal in the aftermath of Hurricane Harvey, which caused billions in damage after it made landfall in Texas in August.

However, it has since been expanded to include the communities in Florida, Puerto Rico and the US Virgin Islands which were hit by the storms which followed.

Barack Obama explained to concertgoers in a pre-recorded message: “As former presidents, we wanted to help our fellow Americans begin to recover.”

George W. Bush added: “People are hurting down here but as one Texan put it, we’ve got more love in Texas than water.”

All five presidents appeared on stage for the anthem, before taking their seats to watch acts including Lee Greenwood, who opened with Proud to be an American, and Lady Gaga.

They were not joined by sitting President Donald Trump, who sent a message ahead of the show praising their “wonderful” work and expressing his “deep gratitude”.

Both Barack Obama and George W. Bush have made speeches in the last week which have been seen as veiled criticism of Donald Trump’s tenure in the White House.

Ex-President Jimmy Carter has announced in a statement that his brain cancer is gone.

“My most recent MRI brain scan did not reveal any signs of the original cancer spots nor any new ones,” Jimmy Carter, 91, said.

The former president first announced the news during a Sunday school class in Plains, Georgia. Doctors have been treating four small melanoma lesions on his brain.

Last month, Jimmy Carter said he was responding well to treatment and there were no signs of further cancer growth.

Jill Stuckey, a member of the congregation at Maranatha Baptist Church in Plains, told the Atlanta Journal-Constitution that Jimmy Carter had been teaching the class of about 350 people when he made the announcement.

“He said he got a scan this week and the cancer was gone,” she said.

“The church, everybody here, just erupted in applause.”

Jimmy Carter revealed in August that cancer initially found in his liver had spread to four spots on his brain. The lesion on his liver was removed on August 12.

After leaving the White House, Jimmy Carter founded the Carter Center, which focuses on human-rights efforts and political mediation.

He has remained active with the center ever since.

Jimmy Carter – a Georgia Democrat – won the Nobel Peace prize for his commitment to finding peaceful solutions to international conflicts and his work with human rights and democracy initiatives.