More than 100 people are believed to be dead after record rainfall caused flooding and landslides in western Japan, a government spokesman says.

Dozens more are reported to be missing and electricity supplies have been hit.

Since July 5, parts of western Japan have received three times the usual rainfall for the whole of July. Two million people have been ordered to evacuate as rivers burst their banks.

On July 9, rescuers restarted their search through the mud for any survivors or the bodies of those killed.

An official in Okayama prefecture told AFP that water levels were gradually receding and that emergency teams may be able to access the worst-hit areas on foot. 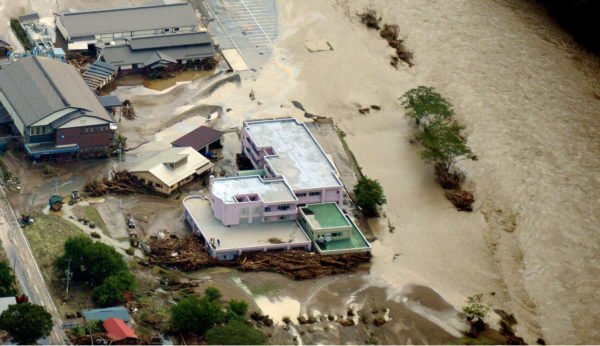 North Korea Floods Kill at Least 133 as Thousands Are Displaced

The heavy rains began with a typhoon last week that was followed by days of record-breaking torrential rain.

In the town of Motoyama, on Shikoku island, 23in of rain fell between July 6 and July 7.

Many buildings have collapsed and vast areas have been covered in debris and thick mud.

Kumano is in the Hiroshima prefecture where most of the deaths have occurred.

On July 8, Shinzo Abe said that rescuers were “working against time” and increased the number of personnel deployed to help with the response to more than 70,000.

He told reporters: “There are still many people missing and others in need of help.”

Flood warnings are still in effect for some of the worst hit areas, including in Okayama prefecture.

However, more settled weather is expected over the next few days which is likely to help with the rescue effort.

According to Japanese officials, the death toll from flooding caused by recent heavy rain in the country’s southern region has risen to at least 15.

Rescue teams are searching for another 15 people who are missing.

Rivers burst their banks, destroying buildings and roads after more than 20in of rain fell on parts of Kyushu, Japan’s southernmost island, over a 12-hour period on July 5. Emergency teams are working through thick mud to try to reach stranded survivors. Hundreds have already been evacuated.

The worst-hit areas are in Fukuoka prefecture.

Japan floods: more than 250,000 people ordered to leave their homes

About 12,000 police, military, firefighters and coast guard personnel have taking part in the rescue operation.