Justin Bieber was playing a sold out show at the ITU Stadium in Istanbul, Turkey, on Thursday, when he paused his act two times to allow fans to step away for the Muslim call to prayer, according to E! Online.

Referred to as Azan, or Adhan as it is called in Turkey, the religious ritual is performed five times a day as followers pause their actions to reaffirm their spiritual ideology.

The prayer is an important one for Turkish citizens, who even mention the practice in their national anthem.

Fans immediately took to Twitter where they were both shocked and delighted by his choice to honor the religious practice.

“Justin Bieber stopped his concert twice in Turkey before the azaan so people can go pray. Alhumdulilah, I’ve got respect for this guy now,” user @taznin_ wrote Friday, adding “all is well” in Arabic. 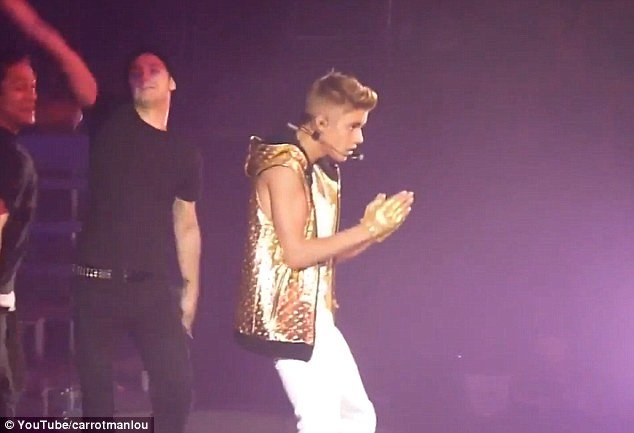 “I have MAD respect for Justin Bieber for stopping his performance in Turkey during prayer, twice. #RESPECT,” @hudabeauty said.

While Justin Bieber, 19, made no mention of it on his highly followed Twitter account, he did share some snaps of his time spent in the Arab nation.

“Turkey is crazy right now. We ready,” the teen idol wrote to his nearly 40 million followers.

Justin Bieber also shared a selfie as he drove through the country – which was instantly liked by over 800,000 fans.

He also retweeted images from his entourage as the group arrived in Turkey – one image showing a sea of fans staring ahead at the stage as they waited for the show to begin.

After Istanbul, Justin Bieber headed off to Dubai as he wraps up the international leg of the Believe Tour.

“Turkey was right. 4 more shows to go. Dubai is next,” he wrote Thursday.

The choice to honor his Turkish fans was seen as positive step for Justin Bieber, whose tour has been plagued with missteps.

A show in Oman was reportedly cancelled because the nation deemed his act “too sexy”, and only hours later as he and his entourage were stopped by security at the Sabiha Gökçen Airport in Istanbul for failing to show the proper travel documents.

Justin Bieber also drew ire for travelling with a Capuchin monkey named Mally, who was confiscated by customs officials in Munich, Germany.

Iran and P5+1 are meeting in Istanbul, Turkey, for talks aimed at ending the deadlock over Tehran’s nuclear programme.

Envoys from the US, UK, France, China, Russia and Germany hope the talks will halt rising regional tension.

Iran says its nuclear programme is peaceful, but critics suspect it of seeking to develop nuclear weapons.

Israel has hinted in recent months that it could carry out a pre-emptive strike on Iran to prevent that happening.

The talks are the first to be held between Iran and the world’s major powers for 15 months.

The envoys are setting the bar pretty low – they do not expect detailed, substantive proposals from either side.

What they want to see is whether Iran is ready to seriously engage and, if that happens, there may be another round of talks in four to six weeks time.

Michael Mann, spokesman for EU foreign policy chief Catherine Ashton, said the Istanbul talks had started in a “positive atmosphere”, adding: “There is a desire for substantive progress.”

The six world powers, known collectively as the P5+1, hope the talks will at least cool tensions. 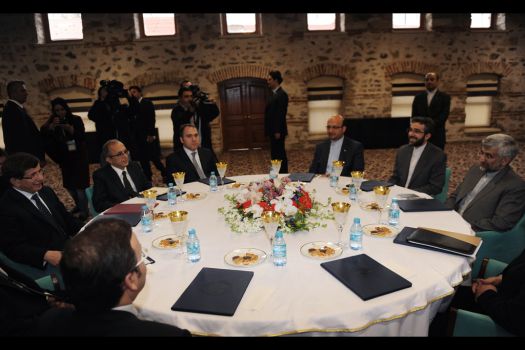 Russia said they had to be “constructive”, and warned both sides not to “overblow the differences” between them.

“The negotiations are about renewing confidence.”

US President Barack Obama has described this as a “last chance” for diplomacy to work, while Secretary of State Hillary Clinton said Iran had to “demonstrate clearly in the actions they propose that they have truly abandoned any nuclear weapons ambition”.

On Thursday, Iranian President Mahmoud Ahmadinejad said his country was “standing firm on its fundamental rights and under the harshest pressure will not retreat an iota from its undeniable right”.

The P5+1 group hopes eventually to persuade Iran to reduce its enrichment of uranium and fully open up its nuclear facilities to inspectors from the International Atomic Energy Agency (IAEA).

There are suggestions that the stringent sanctions on Iran could be reduced if it complies with the requests.

The last series of international talks broke down in January 2011 after the parties failed to agree on any issues.

Since then, the IAEA expressed concern that Iran had failed to co-operate with its inspectors and had carried out activities “relevant to the development of a nuclear explosive device”.

Israel, which believes a nuclear-capable Iran would be a direct threat to its security, has warned that time is running out to prevent that outcome.

Prime Minister Benjamin Netanyahu has said he would never allow Israelis to “live in the shadow of annihilation”, and hinted his country is ready to strike Iran’s nuclear facilities if diplomacy does not work soon.

President Barack Obama has warned against “loose talk of war”, while stressing that all options remain open.

At least 11 construction workers have died after fire swept through a tent at a building site in Istanbul, Turkey.

The incident happened in the district of Esenyurt at the construction site of a shopping centre.

TV footage showed fire crews, working under floodlights in the snow, recovering the bodies of the workers from the ruins of the tent.

Esenyurt Mayor Necmi Kadioglu said the suspected cause of the fire was an electrical heater.

Images from the scene showed adjacent tents had also been burned down. 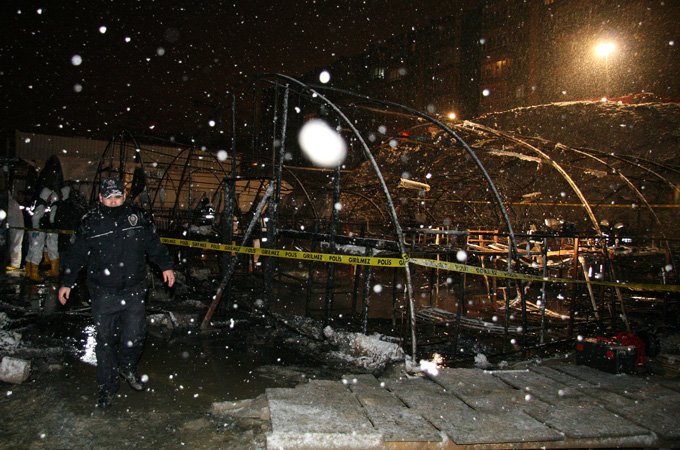 At least 11 construction workers have died after fire swept through a tent at a building site in Istanbul, Turkey

“Between 11 and 14 workers are believed to have died in the fire,” Mayor Necmi Kadioglu told state-run TRT television from the scene.

“This is the site of a shopping mall. It appears the fire has something to do with the heating problem as it is freezing here,” Necmi Kadioglu added.

City officials said an investigation had been opened.

Ten people have been wounded in an explosion that badly damaged a police bus in Istanbul, Turkey, police say.

The blast, reportedly a bomb, happened near the offices of the ruling Justice and Development party.

Five of the wounded were police officers who had been on duty at a nearby business association building.

“It appears that it [the bomb] went off as a police vehicle with 21 officers inside passed by,” Huseyin Capkin said.

None of the injuries was said to be serious.

Witnesses told Turkish TV that the explosives may have been carried on a motorcycle.

Forensic teams began searching the scene shortly afterwards. No group has admitted carrying out the attack although TV reports linked the blast to an attack on a bus stop last year in which eight people were hurt.

Kurdish rebels were blamed for that blast.