At least 22 people have been killed and more than 30 injured in a stampede on a footbridge at a Mumbai railway station, Indian officials report.

The incident was triggered by overcrowding and people seeking shelter from monsoon rains, the officials said.

The injured have been taken to a nearby hospital and senior railway officials are at the scene.

“The incident occurred as heavy rains lashed Mumbai and passengers took refuge on the foot over bridge. People at the front slipped and the huge crowd toppled over, leading to the stampede,” Indian Railways spokesman Ravindra Bhakar told AFP.

“Twenty-two dead have been confirmed, 14 men and eight women… Some 32 passengers are injured.” 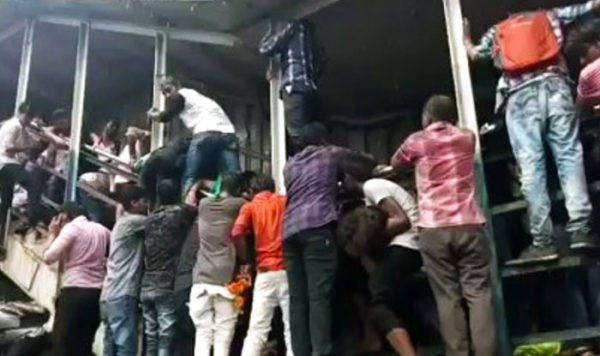 Akash Koteja, one of the injured, said: “Trains were rolling in and some people wanted to get out of the station, but others were not making way. When a few tried, it led to a stampede.”

TV footage from the scene showed commuters trying to rescue fellow passengers from the crush and revive people by pumping their chests.

“We put everybody who was injured in cars, police vans and ambulances and tried to take them to the hospital as quickly as possible,” said one witness quoted by AFP.

Indian PM Narendra Modi said in a tweet: “My deepest condolences to all those who have lost their lives due to the stampede in Mumbai. Prayers with those who are injured.”

The prime minister added that Railway Minister Piyush Goyal was in Mumbai “taking stock of the situation and ensuring all assistance”.

At least ten people have been killed and 20 injured in a stampede at the Baidyanath Jyotirlinga temple in the eastern Indian state of Jharkhand, officials say.

Pilgrims have been marking a Hindu religious festival in Deoghar town.

It happened as pilgrims tried to make their way into the complex, a district official said. The stampede at the Baidyanath Jyotirlinga temple began after pilgrims surged towards the shrine shortly after the doors opened on August 10, an official told the AFP news agency.

Monday is considered an auspicious date to visit the shrine, which includes a main temple and 21 smaller ones devoted to Shiva, the god of destruction.

Pilgrims sleeping in the 4 miles long queue were trampled as others pushed towards the doors, senior police official SN Pradhan said.

“Many tried to rush to the head of the queue which led to chaos and as some of them fell, the devotees got trampled.”

“Ten people including one female devotee are now confirmed dead. Another 15 to 20 people have received injuries,” he said.