Nancy Pelosi has again been elected as the House Speaker – the third most powerful role in Washington.

The 78-yar-old California Democrat reclaimed the gavel after the most diverse class of lawmakers were sworn in and as Democrats took control of the House after mid-term elections gains.

Her victory came as the government remained partly shut down in a row over funds for the president’s border wall.

Nancy Pelosi has said she wants to end the shutdown but will not support the wall.

She said: “I’m particularly proud to be a woman speaker of the house of this Congress, which marks the 100th year of women having the right to vote.

“And, that we all have the ability and the privilege to serve with over 100 women members of Congress – the largest number in history. “

Nancy Pelosi seized the gavel as the House welcomed more women than ever before in the 116th Congress.

As of January 3, 102 women serve in the House, an all-time high, including 36 newly elected members and a record 43 women of color.

While Republican women marked some firsts this past election season – like Marsha Blackburn becoming the first female Tennessee Senator – the vast majority of these new lawmakers are Democrats.

Among them are the first Muslim congresswomen – Michigan’s Rashida Tlaib and Minnesota’s Ilhan Omar – and the first Native American women to serve – New Mexico’s Debra Haaland and Kansas’ Sharice Davids.

House Speaker Paul Ryan has announced he will not run for re-election this year, in a big blow to Republicans with mid-term elections looming.

Congress’ most powerful lawmaker said he would not stand for another term in his Wisconsin district this November.

The clean-cut conservative, who has served in the House since 1999, was the Republican vice-presidential running mate for Mitt Romney in 2012.

Meanwhile, Republicans already face a tough challenge from Democrats to keep control of the lower chamber.

Paul Ryan joins nearly 30 House Republicans who have announced this year they are retiring outright.

Democrats need 23 seats to take over the House. 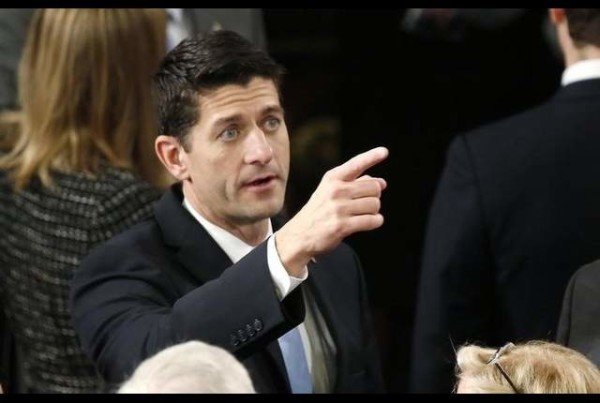 Paul Ryan Willing to Be House Speaker with Conditions

In a news conference on April 11, Paul Ryan said the decision was family-related.

He said: “You all know that I did not seek this job.

“I took it reluctantly.

“But I have given this job everything. I have no regrets whatsoever for having accepted this responsibility.”

Paul Ryan continued: “But the truth is it’s easy for it to take over everything in your life and you can’t just let that happen.”

He said he did not want to be known by his children as “only a weekend dad”.

The 48-year-old father-of-three said he would retire in January after finishing his congressional term.

According to Axios, which broke the story, Paul Ryan has found his job frustrating, partly because of President Donald Trump.

However, President Trump praised the speaker on Twitter as “a truly good man”.

The president tweeted: “Speaker Paul Ryan is a truly good man, and while he will not be seeking re-election, he will leave a legacy of achievement that nobody can question. We are with you Paul!”

The Democratic Congressional Campaign Committee said Paul Ryan’s departure was an ominous sign for Republicans, months away from nationwide elections.

“Stay tuned for more retirements as Republicans increasingly realize that their midterm prospects are doomed,” the fundraising committee added.

According to analysts, Paul Ryan’s seat in Wisconsin’s first district could now fall into Democratic hands.

All 435 House lawmakers and 34 senators will face the voters this November, in what will amount to a referendum on Republican control of Congress and the White House.

The resignation of Paul Ryan – whose role as House speaker places him second-in-line to the president after VP Mike Pence – will spark speculation about whether he could one day mount a White House campaign.

In December Paul Ryan achieved his cherished goal of overhauling the US tax code, and according to Axios, regarded it as the capstone of his legislative career.

Republican congressman Steve Scalise and former White House chief of staff Reince Priebus are among those being touted as possible successors.

According to court documents, Dennis Hastert agreed to pay $3.5 million to a person he abused when the victim was aged 14 and Hastert was working as a teacher and wrestling coach.

The plea represents a dramatic fall for the former senior Republican politician, who has had his portrait removed from the House of Representatives in the US Congress.

The alleged abuse happened while Dennis Hastert was working in Yorkville, a suburb of Chicago, between 1965 and 1981. Three of the victims were wrestlers on a team he coached.

He cannot be charged with abuse as the statute of limitations has expired in the cases.

One of the victims – referred to in court documents as Individual A – said Dennis Hastert had stayed with him in a motel room on the way back from a trip to a wrestling camp and touched him inappropriately.

Two of the others, aged 14 and 17, said Dennis Hastert abused them in the locker room at the high school in Yorkville.

All the victims “struggled and are still struggling” with what Dennis Hastert did to them, prosecutors argue. He made them feel “alone, ashamed, guilty and devoid of dignity”, they say.

Dennis Hastert, who retired in 2007 after serving as House Speaker for eight years, will be sentenced later this month for concealing the large sums of money he paid to Individual A to buy his silence. Dennis Hastert was able to pay Individual A $1.7 million in payments of $100,000 before being questioned by the FBI in 2014 about his withdrawals.

One of the reasons he gave for the large withdrawals was that he was being blackmailed by someone making a false claim of abuse.

In a deal with prosecutors, Dennis Hastert admitted the charge of “structuring and assisting in structuring currency transactions” by removing small sums of money to avoid the transactions being reported.

However, the charge of lying to FBI investigators is set to be dropped.

Defense lawyers want Dennis Hastert to be spared jail because they say he is suffering from ill health.

Dennis Hastert is due to be sentenced on April 27.

Paul Ryan has said he will run for House Speaker if Republicans in the chamber unite behind his candidacy.

The Wisconsin Representative, who ran as Mitt Romney’s vice-presidential candidate in 2012, is seen as his party’s best hope to elect an effective Congressional leader.

A group of ultra-conservative House members have recently rebelled against party leaders.

John Boehner’s handpicked successor House Majority Leader Kevin McCarthy withdrew from consideration after it was clear he did not have the support of the ultra-conservative bloc known as the Freedom Caucus. Freedom Caucus, a group of about 30 to 40 members, demanded key concessions from Kevin McCarthy. The California representative reportedly said he could not effectively lead the House under those conditions.

The very public party infighting has been seen detrimental to the Republicans’ goal of retaining control of Congress and re-taking the White House in 2016.

“We as a conference should unify now,” Paul Ryan told reporters on October 20 after meeting with House Republicans.

“What I told members is if you can agree to these requests and if I can truly be a unifying figure, then I will gladly serve, and if I am not unifying, that is fine as well – I will be happy to stay where I am.”

Paul Ryan gave his colleagues until October 23 to express their support.

He had been reluctant to serve, preferring his role as the chairman of the influential House Way and Means Committee.

Paul Ryan also is the father of three young children and returns home to Wisconsin on weekends to spend time with them.

John Boehner spent many of his weekends raising money for fellow Republican representatives.

Paul Ryan said on October 20 that if elected the role will have to change to accommodate his family life.

To run, Paul Ryan also demanded a House procedure known as “motion to vacate the chair” be abandoned.

The motion allows a small group of lawmakers to challenge the Speaker and is a key source of leverage for the Freedom Caucus.

John Boehner resigned in part because of this tactic.

It is unclear whether Republicans will unite behind Paul Ryan. At least one conservative called Paul Ryan’s demand to end the “motion to vacate the chair” a “non-starter” and others are still uncertain.

John Boehner will resign from his position as speaker of the House and give up his seat at the end of October.

He has been under pressure from the conservative wing of the Republican Party, and in particular over government funding for Planned Parenthood.

Aides say John Boehner had planned to resign since 2014.

The announcement comes one day after the speaker hosted Pope Francis for a major address to the US Congress.

John Boehner is expected to make a public announcement at 10:30 local time.

He assumed the leadership position in January 2011, when Republicans took control of the House. The organization has come under fire from anti-abortion activists who claimed its employees were selling fetal organs.

Hard-line conservatives have urged the leadership to stall a government funding bill – a move that could see the US government shut down next week for the second time in as many years – if language defunding the healthcare provider is not included.

Reuters is reporting that Rep Steve King has told reporters that Rep Kevin McCarthy is top pick to replace John Boehner as speaker.

Rep Bill Huizenga said in a tweet that the speaker made the announcement to his conference this morning.

In a statement, John Boehner’s staff said that he had intended to resign at the end of last year, but the surprise defeat of then House Majority Leader Eric Cantor “changed that calculation”.

On September 24, Pope Francis became the first pontiff to address a joint session of Congress following an invitation from the catholic House speaker.

Republicans have been highly critical of President Barack Obama over the deteriorating relationship with Israel.

During the campaign, Benjamin Netanyahu vowed not to allow the establishment of a Palestinian state, angering the White House.

Benjamin Netanyahu has since tempered those remarks, but the White House still warned there would be “consequences”. Barack Obama called Benjamin Netanyahu on March 19 to congratulate him on his election victory, but warned him that the US was reassessing its approach to Israeli-Palestine peace in the wake of Netanyahu’s comments.

John Boehner’s visit will take place at some point during a two-week congressional recess that begins on March 30, according to his spokesman, Kevin Smith.

“He looks forward to visiting the country, discussing our shared priorities for peace and security in the region, and further strengthening the bond between the United States and Israel,” Kevin Smith said.

The Israeli newspaper Haaretz said the visit would include several congressional Republicans.

Kevin Smith declined to comment on specifics of the trip.

In January, John Boehner invited Benjamin Netanyahu to address a joint session of Congress without notifying the White House.

Benjamin Netanyahu used the speech on March 3, two weeks before the Israeli elections, to criticize Barack Obama’s efforts to reach an agreement with Iran on its nuclear program.

Many Democrats chose not to attend the speech, and Barack Obama refused to meet with Benjamin Netanyahu.