Iota made landfall as a category four storm near the town of Puerto Cabezas, where patients had to be evacuated from a makeshift hospital after its roof was ripped off.

Residents are in shelters, and there are fears of food shortages.

Iota has weakened and Honduras is expected to be hit on November 17.

According to the US National Hurricane Center (NHC), Iota was now a category two storm, but warned it could bring life-threatening storm surges, catastrophic winds, flash flooding and landslides.

The hurricane struck Nicaragua on November 16 with sustained winds of nearly 155mph , the NHC said. It strengthened at sea to a category five storm but it weakened as it made landfall.

In Puerto Cabezas, also known as Bilwi, Iota damaged wooden homes, flooded streets and cut off electricity. Residents said the wind ripped away the roofs of houses “like they were made of cardboard”.

There were no immediate reports of casualties. Nicaraguan officials said around 40,000 people had been evacuated from areas in the storm’s path.

“[Iota] is the strongest hurricane that has touched Nicaraguan soil since records began,” said Marcio Baca, director of the Nicaraguan Institute of Earth Studies.

Hurricanes and Home Insurance – What All Homeowners Should Know

Hurricane Iota is forecast to move inland across the country before hitting southern Honduras. The effect of the rains could be particularly devastating in areas already drenched by Hurricane Eta. Iota made landfall just 15 miles south of where Eta hit on November 3.

In Honduras, officials said at least 50,000 people had been removed from high-risk areas. Speaking at a news conference on November 16, President Juan Orlando Hernández warned: “What’s drawing closer is a bomb.”

Before reaching Central America the storm moved past the Colombian island of Providencia in the Caribbean, cutting off electricity and killing at least one person, officials said.

Colombian President Iván Duque said 98% of the infrastructure in Providencia, home to around 5,000 people, had been damaged.

Iota is the strongest Atlantic hurricane of the year and only the second November hurricane to reach category five – the last was in 1932.

At least 22 people have been killed in Costa Rica, Nicaragua and Honduras as Tropical Storm Nate moves north towards the US.

A state of emergency has been declared in the Central American countries, where more than 20 people are missing.

In Costa Rica, nearly 400,000 people are without running water and thousands are sleeping in shelters.

At least 8 people have died in the storm there, while another 11 were killed when it moved north and reached Nicaragua, where as much as 15ins of rain had been predicted to fall by the US’s National Hurricane Center.

Three people have been killed in Honduras, including two youths who drowned in a river, and several are reported missing.

One man was also reportedly killed in a mudslide in El Salvador, according to emergency services.

On October 5, all train journeys were suspended and dozens of flights canceled in Costa Rica.

More than a dozen national parks popular with tourists have been closed as a precaution.

Nicaragua’s VP Rosario Murillo advised people to be cautious in the heavy rains.

“Sometimes we think we think we can cross a river and the hardest thing to understand is that we must wait,” he said on state radio.

“It’s better to be late than not to get there at all.”

According to the National Hurricane Center, the storm was expected to move off the eastern coast of Honduras at 23:00 ET on October 5.

Forecasters say Nate will gain strength and become a category one hurricane before it makes landfall on the southern coast of the United States on October 8.

Residents from Florida to Texas have been told to prepare for the storm, which, if it does strike, might be the third major storm to hit the southern coast his year.

Both Texas and Florida are still recovering from the damage inflicted by Hurricane Harvey, which hit the former in August and caused “unprecedented damage”, and Hurricane Irma, which made landfall in Florida in September.

A state of emergency was declared in 29 Florida counties, and in New Orleans in Louisiana.

He tweeted: “There is no need to panic.

“Be ready and prepare. Get a plan. Prepare to protect your personal property.”

Oil companies operating in the Gulf of Mexico says they are evacuating staff from platforms which lie along the predicted path of Tropical Storm Nate.

Juan Orlando Hernandez has been declared the winner of Sunday’s presidential poll in Honduras.

Conservative Juan Orlando Hernandez has won 35.88% of the vote, according to AFP news agency.

His main rival, the left-wing candidate Xiomara Castro, has won 29% with 81.5% of polling stations tallied.

David Matamoros earlier said the final result would be known in the next few days, but he called on all candidates to support the new government.

Second-placed Xiomara Castro said she was robbed of victory.

Xiomara Castro said she would present evidence of fraud.

On Tuesday, European Union and Organization of American States observers in Honduras said the voting process had been transparent.

Xiomara Castro, the wife of ousted ex-President Manuel Zelaya, had hoped to become the first female president of Honduras.

Manuel Zelaya, who was deposed in a coup in 2009, told reporters there were “serious inconsistencies” in up to 400,000 ballots.

“We are going to defend our triumph at the ballot box and if necessary will take to the streets,” he said.

“Until proven otherwise, we hold triumph in our hands.”

Students and other Xiomara Castro supporters have already protested over the election results.

Around 5.4 million Hondurans were registered to vote in the general election, selecting a new president, members of parliament and local mayors. 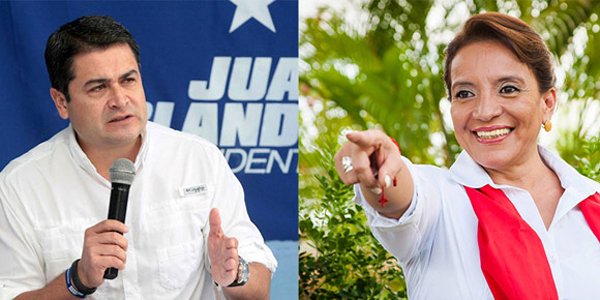 Andy Atkins, his wife Jenny and their four-year-old son Logan miraculously escaped unscathed after their plane plunged into the sea – and doctors passing by in a boat jumped in to save them.

The Texas family was on a sightseeing flight along the coast of Roatan, off Honduras, when the plane’s engine cut out and the craft plummeted into the sea.

There was panic as the plane was sucked under the surface, with Andy Atkins and the pilot desperately scrambling to save his wife and child.

“I dove back under looking for them, came back, got air, went immediately back down,” Andy Atkins, an attorney from Dallas, told NBCDFW.com.

“I came up and I had Logan in my arms and, by the time I got to the surface, Jenny was also at the surface with the pilot holding her.”

But he added: “We were all still in shock at that point.

“We knew that we had survived the initial crash but we didn’t know where it was going to go from there.” 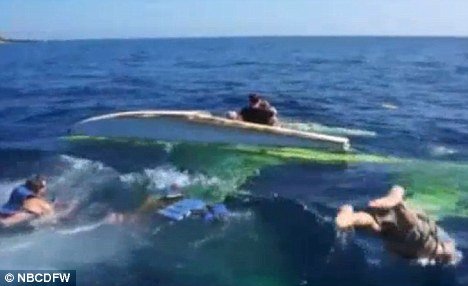 The Texas family was on a sightseeing flight along the coast of Roatan, off Honduras, when the plane's engine cut out and the craft plummeted into the sea

Miraculously, a boat happened to be passing and several people jumped into the water to save them.

Several people on a nearby boat jumped in to save them.

Among the divers were a U.S. Navy doctor and another physician who immediately started treating Jenny Atkins and the boy, NBCDPW reported.

“They screamed that there’s two doctors on board,” Andy Atkins said.

“They got both of them on the back of that boat to give them oxygen and treated them with all their skill.”

The family members were later treated at hospital.

The Atkins family is planning another trip to Roatan this summer – and said the accident brought them closer to the island and the people there.

”It reaffirms your faith in people and humanity that so many people stepped in to help that didn’t have to,” Andy Atkins said.

“We appreciate that we feel like we’ve been given a second chance.”