Music stars including Dave Grohl, Janelle Monae, LA Reid and Miguel have paid tribute to Whitney Houston, a year after her death, at the age of 48.

Whitney Houston died in her hotel room on February 11, 2012.

Speaking at a pre-Grammy gala in Los Angeles, Dave Grohl said Whitney Houston would be remembered “as one of the most iconic vocalists of all time.”

“Not only did she sell 800 bazillion records, but she’s [an] amazing singer.”

Whitney Houston had been due to attend last year’s event, but died hours before it took place.

R&B singer and actress Brandy said: “She was the greatest voice of all time and nobody will ever come close to touching her. I will never forget her.”

Miguel, who received a Grammy for best R&B song on Sunday night, added: “Whitney’s voice was powerful. She was dynamic. I would like her to be remembered for her voice and smile. I think she’d want to be celebrated.”

Record executive and X Factor judge Antonio “LA” Reid, who was being honored at the event, worked with Houston on the soundtrack to her hit movie The Bodyguard.

He said he liked to remember the more personal moments he had with Whitney Houston.

“I can’t sing, but I used to sing with Whitney, just for fun,” he said.

“Just that beautiful spirit and warm personality and that amazing voice.”

American Idol judge Randy Jackson said she would be remembered “as one of the greatest ever to grace a microphone. Greatest ever – that’s big”.

Johnny Depp, Sting, Ne-Yo, Quincy Jones and Patti Smith also attended the event at the Beverly Hilton in Beverly Hills, which was held in honor of Whitney Houston.

Whitney Houston accidentally drowned in her hotel bathroom. A coroner ruled that chronic cocaine use abuse and heart disease were also factors.

Her death sent shockwaves around the music industry, which was gathered in Los Angeles for the annual Grammy ceremony.

A last-minute tribute was arranged for the 2012 show, with singer Jennifer Hudson performing Whitney Houston’s biggest-selling single, I Will Always Love You.

Whitney Houston sang her last ever song when she joined Kelly Price on stage on Thursday night – just two days before her untimely death.

Whitney Houston, who died on Saturday at the age of 48, gave an impromptu performance at the Kelly Price & Friends Unplugged: For The Love of R&B fete at Tru Hollywood earlier this week.

The star was not expected to perform at the event, but was captured on camera as she sang the song Yes, Jesus Loves Me.

Before the duet, Kelly Price, 38, was caught on video discussing how Whitney Houston had influenced her career with the audience.

Kelly Price said: “[Whitney] pushed me to sing to my limit’ before addressing the recently deceased songbird directly.”

“You are a class act, you are an icon,” she added.

Kelly Price was overcome with emotion when Whitney Houston then joined her on stage. They shared a tight embrace before Whitney Houston began belting out the soulful tune.

Whitney Houston managed to get through the performance successfully, though it has been reported that she was acting erratically in the days leading up to her death. 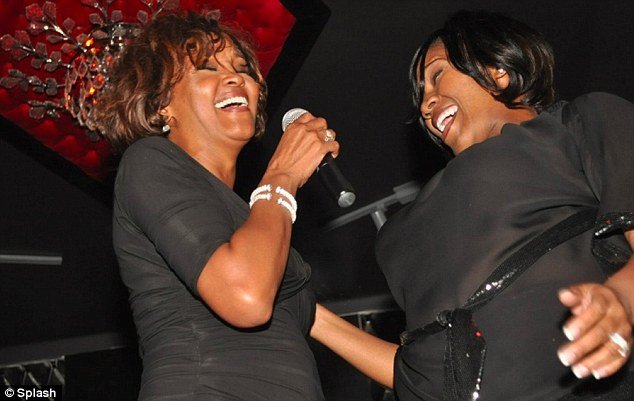 Whitney Houston sang her last ever song when she joined Kelly Price on stage on Thursday night, just two days before her untimely death

Though she was meant to attend Clive Davis’ pre-Grammy bash at the Beverly Hilton Hotel last night, she was found dead in the same hotel Saturday afternoon.

An emergency crew tried to resuscitate the singer in her room, but she was pronounced dead at 3:55 p.m.

She said: “I was having a pre-Grammy party for the nominations [sic].

“I invited Whitney to come…

“We had a great time Thursday night. She came out. We hung out. We danced…

“I wasn’t expecting her to sing….She just walked up on the stage. We embraced each other and she said: <<Give me the mike…>>”

Kelly Price added: “Singing with Whitney has always been to me just an honor.”

The artist also talked about the moment she found out Whitney Houston was dead.

Kelly Price said: “In my heart I was praying it was an internet hoax…and to realize it wasn’t I just don’t know how to explain it.”

Countless other musicians and celebrities have come out last night to celebrate Whitney Houston’s life.

Jennifer Hudson sang a medley of Whitney Houston’s favorite hits in her honor.

Bobbi Kristina Brown, 18, was rushed to the hospital once last night and again this morning.

According to TMZ.com, her family members fear that Bobbi Kristina is suicidal.

The site has been told that Bobbi Kristina was “hysterical, exhausted and inconsolable” and that “the family believes she might try and take her own life”.

Her loved ones are reportedly considering rehab as an option.

Bobbi Kristina got into an altercation with police officers last night when she wasn’t allowed to see her mother’s body.

Whitney Houston tragically died Saturday afternoon at the Beverly Hilton Hotel in Los Angeles at the age of 48 after partied the night before.

While the star’s cause of death is as yet unknown, it has been reported that Whitney Houston “partied heavily” the night before.

Whitney Houston died at the Beverly Hilton Hotel, where she was staying in order to attend at perform at a pre-Grammys party hosted by Clive Davis.

According to TMZ, Whitney Houston was seen with a large group of friends at the hotel bar on the eve of her death.

Sources told TMZ that the group were drinking and being loud.

TMZ went on to allege that Whitney Houston and her friends stood out because of all the noise they were making, despite the fact that the hotel was abuzz with guests getting ready for the pre-Grammy festivities.

Life-saving attempts were unsuccessful, and the singer was pronounced dead at 3:55 p.m.

According to TMZ, police have sealed off the hotel room where Whitney Houston died and will not be searching it until they have obtained a search warrant.

TMZ reports that their primary interest is to establish whether or not drugs were present in the room. 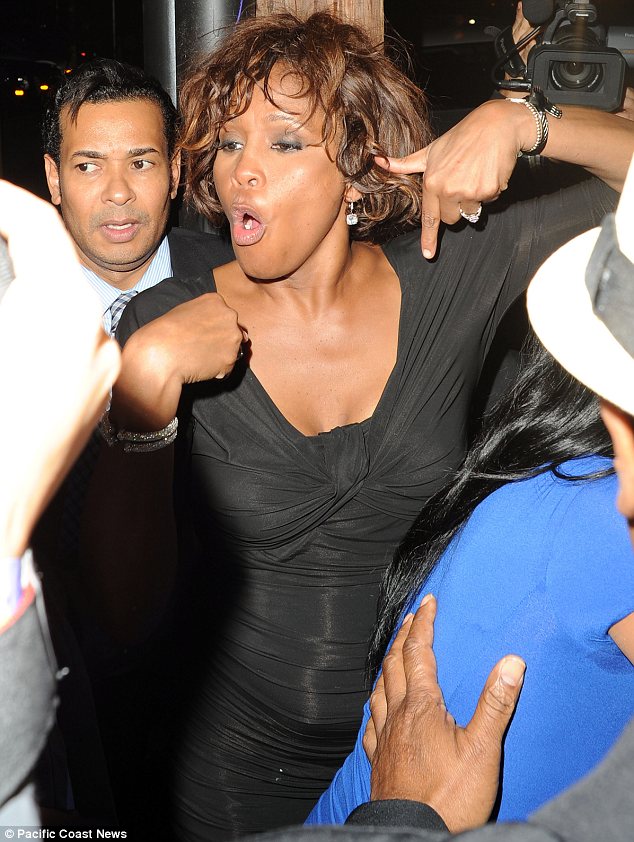 According to TMZ, Whitney Houston was seen with a large group of friends at the hotel bar on the eve of her death

Whitney Houston was spotted looking worse for wear on a night out with friends just two days before her death.

The singer had been a guest at the Kelly Price & Friends Unplugged: For The Love Of R&B Grammy Party at Tru Hollywood and had even performed during the night.

A witness told Us Weekly at the time that Whitney Houston had appeared “wasted” and “moody” as she exited the night club.

The source said: “She reacted angrily to the security guards trying to get her into her car…and started cussing them out.”

The observer went on to say that even though Whitney Houston was stopping and signing autographs for fans, “she would get moody again in a split second”.

The source added: “It was sad because her fans noticed that she was really shaky as she left the venue. She definitely was not in control of herself.”

Dressed all in black, Whitney Houston appeared angry and agitated as she left the venue and looked like she had partied a little hard.

Wearing a short black dress the star emerged with her hair messed up and gestured aggressively to the waiting photographers.

The release of the photos showing the star’s erratic behavior and disheveled look sparked concern over the singer’s health.

According to The Hollywood Reporter, Whitney Houston had a run-in with former X Factor contestant Stacy Francis that evening, after the star failed to remember the aspiring singer after she once pulled her onstage during one of her concerts.

A source told the website that Whitney Houston was “cordial at first” but the scene soon changed after Whitney’s friend, R&B star Ray J, stepped in.

An eyewitness said: “Whitney just got belligerent. Ray was trying to defend Stacy, telling Whitney, <<Stacy’s family!>>, but Whitney was feeling crowded out and hands were raised.”

The source added: “You didn’t know which way it could go there for a minute.”

When contacted by The Hollywood Reporter following the alleged incident, Stacy Francis said: “I have the utmost respect for Whitney Houston and her talent.”

However, Us Weekly reports that Whitney Houston “was fine” the following day as she conducted a sound-check to gear up for her performance at the pre-Grammys party.

A source told the magazine: “She was present and ready…She had water to keep her vocals clear, and was trying to not smoke.”

Whitney Houston has previously battled an addiction to crack cocaine and admitted to taking drugs with Bobby Brown during their turbulent 14 years of marriage.