Dwyane Wade and Gabrielle Union married on August 30 in Miami.

According to a report by Local 10 News, guests and the wedding planners were sworn to secrecy about the nuptials.

The Miami Heat star and his bride asked their guests to sign confidentiality agreements and told them not to bring cameras or phones. 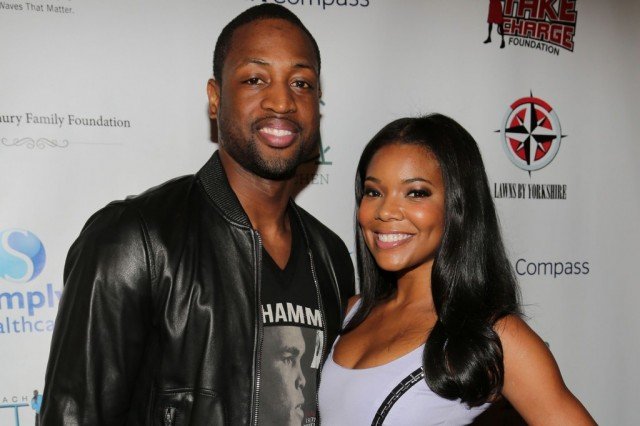 However, some information has leaked out. Gabrielle Union’s friend, actress Essence Atkins, tweeted before the wedding: “Congratulations Dwyane Wade & Gabrielle Union on their wedding.”

Dwyane Wade and Gabrielle Union were wed at the Chateau Artisan mansion, a castle-like building that even is surrounded by a moat.

According to People magazine, the couple was scheduled to arrive via helicopter, and music for the ceremony was provided by recording artist John Legend.

It is the second marriage for both Dwyane Wade and Gabrielle Union.

Dwyane Wade’s ex-wife Siohvaughn Funches is in the midst of an apparent meltdown as she has taken to the streets of Chicago carrying a sign saying the Miami Heat guard has left her homeless and ranting about his “$90 million contracts” in an apparent attempt to humiliate the NBA star.

Siohvaughn Funches has been seen carrying the sign, which reads “NBA Miami Heat star mother of his children on the street”, around Dwyane Wade’s native Chicago, where he and his former wife were high school sweethearts and married in 2002.

The couple divorced in 2007 after having two children together, Zaire Blessing Dwyane Wade and Zion Malachi Airamis Wade.

Earlier this month, Siohvaughn Funches filed a new lawsuit against Dwyane Wade – who signed a six-year contract with the Heat in 2010 worth $107 million – over the splitting of proceeds from his many endorsement deals.

With his salary and endorsements, Dwyane Wade made a total of $26 million last year, landing him at the number 12 spot on Sports Illustrated‘s “Fortunate 50” list of the top earners in professions sports.

The lawsuit, filed on July 9, in Cook County Circuit Court, claims that Dwyane Wade is not depositing proceeds from his endorsement deals into a joint account controlled by the two of them – as required by their 2008 divorce settlement.

That agreement had previously been tossed out in domestic court following the couple’s bitter custody battle. It was later restored after Siohvaughn Funches appealed the decision.

In the suit, Siohvaughn Funches claims she’s unable to pay her mortgage and insurance on her home and cars because Dwyane Wade’s withheld his endorsement earnings from companies like Gatorade, T-Mobil and Staples.

Following the couples’ divorce, Dwyane Wade was awarded sole custody of the two children as Siohvaughn Funches routinely bashed him in the media.

Siohvaughn Funches’ latest lawsuit against the hoopster claims breach of contract and civil conspiracy. She seeks a total of $2 million in damages.

Dwyane Wade, who just won the NBA Championship with the Heat, has been romantically linked to actress Gabrielle Union since 2007.