For the second time in her three Daytona 500s, Danica Patrick’s day ended with a crash.

After rain delayed the Daytona 500 for 6 hours, 22 minutes, on Lap 145, Kevin Harvick moved up the track and clipped Brian Scott, triggering a crash involving nine cars.

As Danica Patrick attempted to skirt to the inside, Aric Almirola’s car slid down and tagged her car in the right front. The impact eventually sent her car careening into the outside wall.

“What the hell happened?” asked Danica Patrick, who led two laps before contact with Aric Almirola shot her straight into the wall exiting Turn 4. 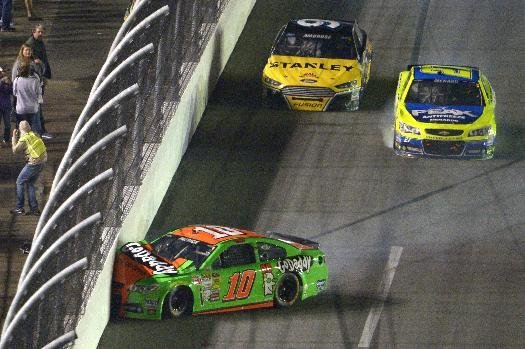 For the second time in her three Daytona 500s, Danica Patrick’s day ended with a crash

Paul Menard led a race-high 29 laps before the wreck.

Aric Almirola says he wasn’t sure what happened because the crash.

Later, with the laps winding down in the race, Austin Dillon slid up into Kyle Larson, triggering the second multicar wreck of the evening.

With the pack running through Turns 3 and 4 on Lap 161, Austin Dillon lost control of the No. 3 Chevy, turned Larson and slid up until Casey Mears collected Brian Vickers, Michael Annett, Marcos Ambrose, Brian Scott and Jamie McMurray, drawing the fourth caution.

Austin Dillon caused yet another wreck with six laps remaining in the race. He ran into his new teammate Ryan Newman in Turn 3 and ignited a seven-car wreck.