President Trump tweeted that his top law enforcement official will be temporarily replaced by his chief of staff, Matthew Whitaker, who has criticized the Russia inquiry.

He tweeted on November 7: “We thank Attorney General Jeff Sessions for his service, and wish him well!” 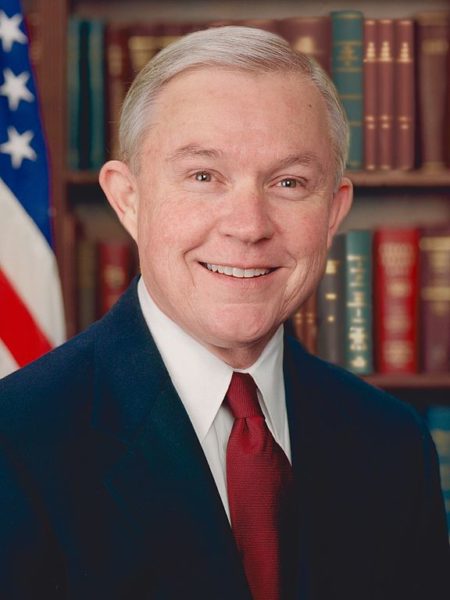 Donald Trump Defends Jeff Sessions Amid Calls for Him to Quit

In a resignation letter, Jeff Sessions – a former Alabama senator who was an early supporter of Donald Trump – made clear the decision to go was not his own.

He wrote: “Dear Mr. President, at your request I am submitting my resignation.”

“Most importantly as my time as attorney general, we have restored and upheld the rule of law,” he added, while thanking the president.

President Trump has repeatedly pilloried the attorney general since Jeff Sessions stepped aside from the Russia investigation in March 2017, allowing his deputy Rod Rosenstein to lead an inquiry that has dogged the White House.

In July 2017, President Trump told the New York Times: “Sessions should have never recused himself, and if he was going to recuse himself, he should have told me before he took the job and I would have picked somebody else.”

The president has at various times belittled Jeff Sessions as “beleaguered”, “VERY weak”, and “DISGRACEFUL”.

The attorney general’s exit comes as Special Counsel Robert Mueller continues to hunt for evidence of potential collusion between the Trump presidential campaign and Russia.

Robert Mueller’s wide-ranging investigation – overseen by the DoJ – has resulted in a series of criminal charges against several of Trump associates.

Democratic Senator Chuck Schumer tweeted after the announcement was made: “Clearly, the President has something to hide.”

Chuck Schumer added: “Given his previous comments advocating defunding and imposing limitations on the Mueller investigation, Mr. Whitaker should recuse himself from its oversight for the duration of his time as acting attorney general.”

During a Congress hearing, Attorney General Jeff Sessions has denied having undisclosed meetings with Russian officials at a Washington DC hotel.

Jeff Sessions also told the Senate Intelligence Committee any suggestion he colluded with the Kremlin was “an appalling and detestable lie”.

Jeff Sessions vowed to defend his honor “against scurrilous and false allegations”.

His remarks came after sacked FBI Director James Comey said he believed he was fired to influence the agency’s investigation into Russian political meddling.

US intelligence agencies believe that Moscow interfered in the last year’s election in order to help Donald Trump get elected.

The Senate committee is of one several congressional panels that, along with a special counsel, is also investigating whether any Trump campaign officials colluded with the alleged Kremlin plot. Jeff Sessions told the Senate committee he has never received a classified briefing about Russian meddling in last year’s election.

He also vehemently denied speaking to Russian officials about the election, during a campaign in which he was a close adviser to Donald Trump.

Jeff Sessions said on June 13: “I have never met with or had any conversation with any Russians or any foreign officials concerning any type of interference with any campaign or election in the United States.”

He is the most senior member of the Trump administration to testify before the Senate committee.

Jeff Sessions acknowledged he met Russian Ambassador Sergei Kislyak twice, but suggested he could not remember whether he met the envoy at a foreign policy speech event for then-candidate Donald Trump at the Mayflower Hotel on April 27, 2016, as media have reported.

The former Alabama senator also denied media reports that he offered his resignation when Donald Trump was reportedly angered by his recusal from the FBI Russia probe, telling the panel he “will not be deterred”.

Vice-Chairman Senator Mark Warner, a Democrat, pressed Jeff Sessions about his role in the sacking of James Comey.

Jeff Sessions said he never spoke to the former FBI director, who reports to the US attorney general, about his job performance before President Trump fired him in May.

However, Jeff Sessions did confirm James Comey’s assertion that he told the US attorney general that he felt uncomfortable speaking directly to President Trump in a one-on-one setting.

Several Democratic senators expressed frustration because Jeff Sessions repeatedly refused to answer questions relating to conversations he had with the president.

Similar answers were heard last week during testimony from intelligence chiefs before the same panel.

President Donald Trump has defended under-fire Attorney General Jeff Sessions amid calls for him to quit.

According to the Democrats, Jeff Sessions “lied on oath” at his confirmation hearing about contacts with the Russian ambassador.

President Trump said Jeff Sessions “could have stated his response more accurately but it was clearly not intentional” and accused Democrats of a “witch hunt”.

However, Jeff Sessions has removed himself from an FBI probe into alleged Russian meddling in the US election.

The Democrats have maintained their attacks on Jeff Sessions, saying his explanation regarding his contacts with the Russian ambassador in 2016 were “simply not credible”.

Donald Trump said the Democrats had “lost the election and now they have lost their grip on reality”.

The Trump campaign was dogged by allegations that some of his team had met with Russian officials and that Moscow had interfered in the election on his behalf. Donald Trump has branded the allegations “fake news”.

It stems from Jeff Sessions’ comments at his confirmation hearing in January.

He was asked: “If there is any evidence that anyone affiliated with the Trump campaign communicated with the Russian government, in the course of this campaign, what will you do?”

However, it then emerged Jeff Sessions and Russian ambassador Sergei Kislyak held a private conversation in Sessions’ office in September and spoke at a meeting with several other envoys on the sidelines of the Republican National Convention in July.

Jeff Sessions was at the time a member of the Senate Armed Services Committee. However, he was already a prominent member of Donald Trump’s campaign team.

The former Alabama senator also had meetings with more than 25 foreign ambassadors in the course of the year.

He insists he did not lie at the confirmation hearing, saying his comments were “honest and correct as I understood it at the time”.

Jeff Sessions said he had spoken with the Russian ambassador as a US senator and not as Donald Trump’s “surrogate”.

He said: “I never had meetings with Russian operatives or Russian intermediaries about the Trump campaign.”

Jeff Sessions admitted that in his confirmation comments he “should have slowed down and said, <<but I did meet one Russian official a couple of times>>”.

He said that during his meeting with Sergei Kislyak they talked about terrorism and then “somehow the subject of Ukraine came up”.

Nancy Pelosi repeated her call for Jeff Sessions to quit. She said his “his narrow recusal and sorry attempt to explain away his perjury” were totally inadequate.

Adam Schiff, the top Democrat on the House intelligence committee, said Jeff Sessions “clearly misled” the Senate and his explanation was “simply not credible”.

Although some top Republicans in the House and Senate agreed Jeff Sessions should recuse himself from the investigation, senior figures rallied behind him, resisting demands for the appointment of an independent prosecutor.

For Jeff Sessions to be charged with perjury, prosecutors would have to show that he not only made false statements, but knowingly and willfully misled members of the committee about an indisputable fact.

According to the DoJ, Jeff Sessions met Russia’s ambassador during Donald Trump’s presidential campaign, despite telling his confirmation hearing he had “no communications with the Russians”.

The justice department confirmed Jeff Sessions met Sergei Kislyak in July and September 2016 as part of his role on the Senate Armed Services Committee.

On March 1, Attorney General Jeff Sessions said his comments at his confirmation related to his role on the Trump campaign team.

Democrats accused him of lying on oath.

They said Jeff Sessions must resign, and also called on him to step aside from an investigation by the FBI – which he oversees as attorney general – into alleged Russian interference in the US election, including contacts between Russian officials and those involved in campaigning.

The US intelligence community has concluded that alleged Russian hacking of DNC was carried out to help Donald Trump defeat Hillary Clinton.

Donald Trump’s National Security Adviser, Michael Flynn, was fired last month after he misled the White House about his conversations with the Russian ambassador, allegedly regarding sanctions against Moscow.

As reported in the Washington Post and confirmed by the justice department, Jeff Sessions met Russian Ambassador Sergei Kislyak as a member of the Senate Armed Services Committee twice last year.

The Post reports that they held a private conversation in Jeff Sessions’s office in September and had spoken earlier in the summer at a meeting with several other ambassadors.

Jeff Sessions had meetings with more than 25 foreign ambassadors in the course of the year.

However, Jeff Sessions’ meetings with Sergei Kislyak came while he was a prominent part of Donald Trump’s campaign team – a so-called surrogate – and amid growing reports of Russian meddling in the US election.

During his confirmation hearing on January 10, Jeff Sessions was asked by Democrat Senator Al Franken: “If there is any evidence that anyone affiliated with the Trump campaign communicated with the Russian government, in the course of this campaign, what will you do?”

In a statement on March 1, Jeff Sessions reiterated: “I never met with any Russian officials to discuss issues of the campaign. I have no idea what this allegation is about. It is false.”

DoJ spokeswoman Sarah Isgur Flores said there had been “absolutely nothing misleading about his answer” at the confirmation hearing.

She said: “He was asked during the hearing about communications between Russia and the Trump campaign – not about meetings he took as a senator and a member of the Armed Services Committee.”

Jeff Sessions was also backed by the White House, which condemned the “latest attack against the Trump administration by partisan Democrats”.

While Congressman Adam Schiff, the top Democrat on the House intelligence committee, said that if the reports were accurate, Jeff Sessions must withdraw from the FBI investigation.

News of Jeff Sessions’ meetings broke just after a congressional committee agreed to an investigation into Russia’s alleged interference in the election.

The White House denies any improper behavior during the election campaign, and Russia has consistently rejected allegations of interference.