Egyptian satirist Bassem Youssef’s show, al-Bernameg (The Program), has come to an end, its creator has announced.

Bassem Youssef said he was “tired of struggling” and worried about the safety of his family.

The show has been sued dozens of times since it began in the wake of ex-President Hosni Mubarak’s downfall in 2011.

Bassem Youssef, a former heart surgeon, told a news conference on Monday that the channel that carried the show had been pressured to drop it.

“The present climate in Egypt is not suitable for a political satire program,” he added.

Bassem Youssef denied that he was capitulating to pressure, saying: “Stopping the program sends a much stronger message than if it continued.”

At its height, al-Bernameg was watched by an estimated 8 million viewers inside Egypt and many millions more abroad.

The show began as a series of amateur YouTube clips filmed in Bassem Youssef’s Cairo flat in the days following Egypt’s 2011 revolution.

Inspired by Jon Stewart’s Daily Show, Bassem Youssef went on to develop al-Bernameg, a satirical show filmed in front of a studio audience.

Its success made Bassem Youssef a household name throughout the Arab world and he was named as one of the world’s top 100 most influential people by Time Magazine in 2013.

However, al-Bernameg ‘s sharp satire repeatedly angered the authorities, who tried to close it down.

In November the private Egyptian CBC channel refused to broadcast one episode because it had “violated editorial policy”.

The decision came days after Bassem Youssef had lampooned the then head of the army, General Abdul-Fattah al-Sisi, over chocolates that bore his name.

In February, prosecutors filed fresh complaints, accusing Bassem Youssef of insulting the armed forces, the will of the Egyptian people and the “symbols” of Egypt.

Al-Bernameg had been on temporary hiatus during Egypt’s presidential election, which Abdul-Fattah al-Sisi won by an overwhelming margin.

Before its cancellation, the show had been due to return later this week.

An arrest warrant has been issued in Egypt for popular political satirist Bassem Youssef for allegedly insulting Islam and President Mohamed Morsi.

Bassem Youssef has faced several complaints over his show Al Bernameg (The Programme).

The satirist has poked fun at a wide range of figures, from fellow television presenters to well-known Muslim scholars and recently Mohamed Morsi himself. 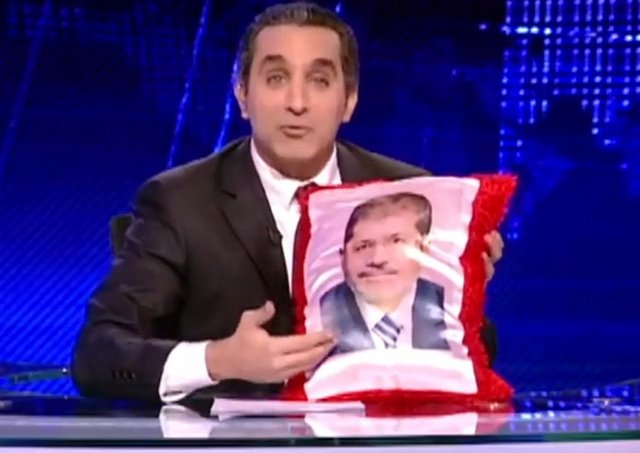 The move is also seen as the latest in a string of prosecution actions against opponents of the president and his party, the Muslim Brotherhood.

The prosecutor, Talat Ibrahim, was appointed late last year by the president, after he had sacked his predecessor, Abdel Maguid Mahmoud.

However, a court this week ordered Maguid Mahmoud’s reinstatement, a decision that Talat Ibrahim said on Saturday he would fight.

But sketches in which Bassem Youssef portrayed Mohamed Morsi as a pharaoh, calling him “Super Morsi” for holding on to executive and legislative powers, and, separately, putting the president’s image on a pillow and parodying his speeches angered one Islamist lawyer, whose formal complaint resulted in the investigation.

As well as insulting President Mohamed Morsi and Islam, Bassem Youssef is also accused of “spreading false news with the aim of disrupting public order”.

In a statement posted on Bassem Youssef’s Twitter account on Saturday he confirmed the warrant, adding: “I will go to the public prosecutor’s office on Sunday – unless they send me a police car and save me [the bother of] getting there on public transport.”