A few months ago, great minds at Merrill Lynch put their heads together to think about the future of robotics. They ended up churning out a report that was over 300 pages long. The report drew together all the latest thinking on the subject of the upcoming robotic revolution. And their aim was to provide some sort of guidance to banks and investors looking to get into the sector.

What they concluded was nothing short of remarkable. They pitched the upcoming robotics revolution as the “fourth industrial revolution.” In other words, it was on a scale comparable to the previous three: steam power, mass production, and electronics. But arguably, the robotics revolution has the potential to outshine all of these prior advances. The reason is that those all relied on the finite human intellect and number. People are only so smart. And we can’t just grow thousands of human beings in the lab to work in Foxconn factories. (Although they’re probably working on it).

This is what makes the next revolution so exciting. Autonomous machines are going to be both vastly more intelligent in some applications, as well as more numerous. We’re going to start seeing strong positive feedback loops. Artificially intelligent robots will be able to evaluate their own systems. Then they’ll be able to suggest to engineers methods to improve them. As they improve, they’ll get better at designing better systems and so on. The potential of the technology is, therefore, truly mind-boggling.

But is this just a load of hot-air. Or are we really on the cusp of a robot revolution? Here are some tell-tale signs that we are.

One of the first places that robots will make an appearance is in finance. These aren’t going to be humanoid robots, like Asimo. They’re not even going to be physical, like Amazon warehouse robots. Instead, they’re going to be in software, making decisions. Perhaps the first area that’s going to see a drop-off in jobs is finance. Right now, a lot of jobs in the financial sector are tied up in analytics. But machines are much better, even today, at doing analytical work than people.

According to the Guardian, robots could replace up to 35 percent of jobs in the UK and 47 percent in the US. And most of those will be accountants, analysts, and statistical technicians. Why? Because computer programs will be able to replicate almost all of their functions. And they won’t need six-figure salaries to boot.

Additive Manufacturing On The Rise

Right now the additive manufacturing industry is getting very excited about robotics. And it should be. It’s a monumental opportunity for the sector.

MIT announced in April that they had made the first ever 3D printed robot made from both solids and liquids. MIT’s robot literally walked out of its printer. But the cool science hid the real value of the story. What it revealed was how additive manufacturing is making robots customisable.

Now that 3D printing has gone mainstream, this is a technology that’s available to all businesses. And there are plenty of options out there. For example, it’s easy to discover Zortrax 3D printing ecosystem and put it to use in your firm.

Merrill Lynch’s report then went into the different sectors all experiencing growth in the use of robots. There are markets in commercial, personal, industrial and military settings. And because these markets are so diverse, it suggests that there will be sustained demand for robots. Back in 2000, the global robotics market was worth a mere $7.4 billion. By 2015 that had shot up to $26.9 billion. And by 2025 it will hit $66.9 billion, according to the report.

That growth is expected to be driven by all sectors going forward. Companies will demand more robots to improve their customer service. Individuals will demand robots as personal assistants and vacuum cleaners. The military will demand more drones and other autonomous, weaponized vehicles. And industry will continue to automate rote tasks.

The threat to low skilled jobs is palpable. According to the data, offshoring jobs to poorer countries saves 65 percent on labor costs. But replacing labor outright with robots costs more than 90 percent less.

Around half a million robot-surgeries were carried out in the US in 2015. That’s up from practically none a decade ago. Robots are just more accurate than people. And so it is unethical not to introduce them to the medical room. But in the future, will we need doctors at all?

Right now IBM is trialing its most advanced medical robot, Watson. Watson became famous in 2011 after beating both the Jeopardy world champions at their own game. Now it’s graduated to become a diagnostician. And it’s being used in hospitals all over the US to make more accurate diagnoses.

When Watson was first introduced, the idea was that it would replace doctors’ traditional diagnostic role. But the industry fired back and threatened not to use Watson if it undermined their jobs. IBM backed down, and now Watson is being used as a complementary tool, not a replacement. Despite this, it’s still improving doctor’s performance. With its help, they’re making far fewer errors than they did when diagnoses were made by humans alone.

Robots That Can Learn From Raw Input

Up until recently, robots have been very brittle systems. Sure, you could put them on a car production line. But the cars had to arrive in the exact position in order for the robot to be able to do its job. If a car was not where the robot expected it to be, the results were disastrous. This means that things couldn’t be changed on the fly. And it meant that robots couldn’t be more widely deployed.

Today, things are very different. Now we have working prototypes of robots that can work alongside people. Plus, they’re also able to adapt to their environment. For instance, robots like Baxter learn how to grip objects, just using the raw input from their cameras.

The European Space Agency (ESA) has unveiled plans to “take 3D printing into the metal age” by building parts for jets, spacecraft and fusion projects.

The AMAZE project brings together 28 institutions to develop new metal components which are lighter, stronger and cheaper than conventional parts.

Additive manufacturing (or “3D printing”) has already revolutionized the design of plastic products.

Printing metal parts for rockets and planes would cut waste and save money.

The layered method of assembly also allows intricate designs – geometries which are impossible to achieve with conventional metal casting.

Parts for cars and satellites can be optimized to be lighter and – simultaneously – incredibly robust. 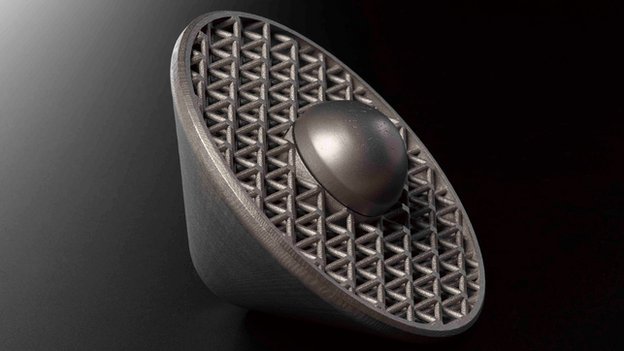 The AMAZE project brings together 28 institutions to develop new metal components which are lighter, stronger and cheaper than conventional parts

Tungsten alloy components that can withstand temperatures of 3,000C were unveiled at AMAZE’s launch on Tuesday at London Science Museum.

At such extreme temperatures they can survive inside nuclear fusion reactors and on the nozzles of rockets.

“We want to build the best quality metal products ever made. Objects you can’t possibly manufacture any other way,” said David Jarvis, ESA’s head of new materials and energy research.

“To build a [fusion reactor], like Iter, you somehow have to take the heat of the Sun and put it in a metal box.

“If we can get 3D metal printing to work, we are well on the way to commercial nuclear fusion.”

AMAZE is a loose acronym for Additive Manufacturing Aiming Towards Zero Waste and Efficient Production of High-Tech Metal Products.

The 20 million-euro project brings together 28 partners from European industry and academia – including Airbus, Astrium, Norsk Titanium, Cranfield University, EADS, and the Culham Centre for Fusion Energy.

Factory sites are being set up in France, Germany, Italy, Norway and the UK to develop the industrial supply chain.

These high-strength components are typically built from expensive, exotic metals such as titanium, tantalum and vanadium.

A new world speed record for creation of a 3D-printed nano-object has been claimed by researchers at Vienna University of Technology in Austria.

The Austrian team is able to create sculptures as small as a grain of sand in a fraction of the time than had previously been required.

To demonstrate the process the group created a model of a Formula 1 racing car 0.285 mm (0.011in) in length in just over four minutes.

The scientists said the technique could be used to make small biomedical parts.

To produce the car about 100 layers, each consisting of 200 single printed lines, were created by Vienna University of Technology’s equipment.

“The technology itself is quite well known in the science arena, but the problem was that it was always extremely slow,” said Prof. Jurgen Stampfl.

“It was good as a showcase, but for real world applications it was much too time-consuming. Making complex large 3D structures would take hours or even days.

The formal name for the process is “two-photon lithography”.

It involves focusing a laser beam onto liquid resin to harden it, leaving behind a line of solid polymer just a few nanometres wide. 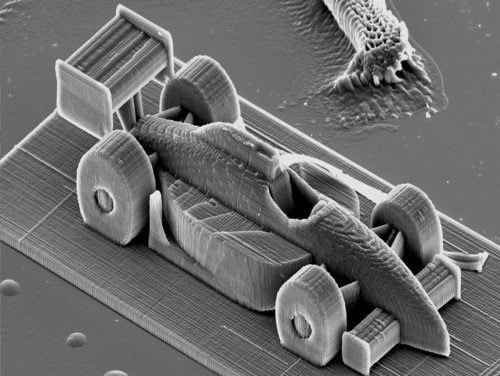 Unlike traditional 3D-printing techniques which build up an object by adding layers to its surface, the laser can create solid material anywhere within the liquid material.

The process gets its name because the resin only sets if the molecules within it absorb two photons of the laser beam at once – which only happens at the very centre of the beam.

The team’s breakthrough involved improving the control mechanism for mirrors used to focus the laser, and developing the special type of resin involved in the process.

The researchers are now developing bio-compatible resins so that the objects they create can have be used by doctors.

One suggested application is to create scaffolds which cells could use to build new biological tissues.

Engineers at Washington State University have already shown how 3D-printers can be used to build scaffolds to promote the regrowth of damaged bone.

Prof. Jurgen Stampfl said his team’s technique can work in water-based environments meaning it is also capable of creating scaffolds suitable for softer tissues such as cartilage and muscle tissue.

“We can also <<write>> these structures in the presence of cells as we use an infrared laser which is completely harmless for biological tissue,” Prof. Jurgen Stampfl added.

“This is not possible with other 3D-printing techniques which first rely on making the scaffolds and then seed the cells, or use a thin inkjet nozzle to push through the cells which may damage them.

“The two-photon lithography technique lets us do the writing in the same space as the cells – what we call in-vivo writing.”