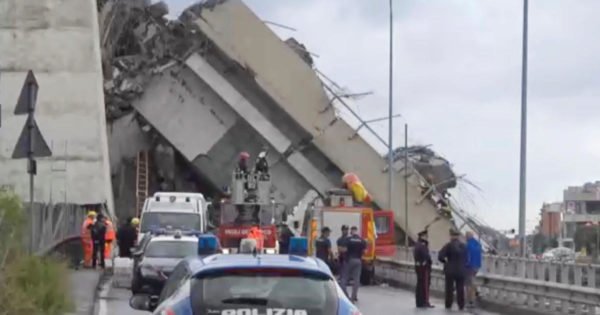 At least 26 people were killed and other 15 severly injured in Genoa, Italy, after a dramatic collapse of a highway bridge.

Rescuers are now searching into the night for possible survivors

Reports say cries can be heard from people trapped in the debris. Twelve people are said to be missing.

Some 300 firefighters from across Italy have been using sniffer dogs and climbing gear in the search.

Hundreds of people were evacuated amid fears other parts of the bridge might fall.

The cause of the bridge’s collapse, which occurred during torrential rain, was not immediately clear but questions had been raised about the safety of the structure.

Interior Minister Matteo Salvini has vowed to bring anyone responsible for the collapse to book.

The Morandi Bridge, built in the 1960s, stands on the A10 toll highway, an important conduit for goods traffic from local ports, which also serves the Italian Riviera and southern coast of France.

The Italian fire service tweeted a video of one person being extracted and carefully lowered on cables from a shattered vehicle, which was suspended in the wreckage of the bridge, high above the ground.

Between 30 and 35 cars and three heavy vehicles were on the bridge at the time of the collapse.

A huge tower and sections of the bridge collapsed on to railway lines, a river and a warehouse. Reports suggest that nobody was killed on the ground, although some people were injured.

A section measuring about 200 meters fell at around 11:30 local time. Police say there was a violent cloudburst at the time.

An unnamed witness quoted by Italy’s Ansa news agency said: “We heard an incredible roar and first we thought it was thunder very close by.

“We live about 5km [3 miles] from the bridge but we heard a crazy bang… We were very scared… Traffic went completely haywire and the city was paralyzed.”

The collapse of the bridge was an “incident of vast proportions on a vital arterial road, not just for Genoa, but for the whole country”, said the governor of Liguria region, Giovanni Toti.

“The Morandi bridge connects three major ports in our country, used by tens, even hundreds of thousands of people. They depart from these ports on holiday. These docks receive most of our country’s imported goods. It damages the very structure of the Italian logistics system. We are expecting a very fast response from the government.”

The new government has pledged to increase public investment.

Italy spent more than €14 billion ($16 billion) on its roads in 2006 but that had dropped to less than €4 billion after the 2008 financial crisis, after the according to data from the Organization for Economic Co-operation and Development (OECD).

The figures cover spending on new transport construction and the improvement of the existing networks.