Riz Ahmed won best lead actor in a limited series or movie for The Night Of.

Charlie Brooker, who won best writing for a limited series for his Netflix show Black Mirror.

One of the episodes, San Junipero, also won the trophy for best TV movie. Charlie Brooker said it “was a story about love, and love will defeat hate, it will win”.

John Oliver and his writing team scooped two prizes for satirical show Last Week Tonight. He said a show like his could definitely work in the UK.

The Handmaid’s Tale’s win for best drama series means Hulu has become the first streaming service to win that award, beating the likes of big hitters Netflix and Amazon.

Bruce Miller – who won two trophies as the show’s writer and executive producer – thanked author Margaret Atwood, “who created this world for all of us”. The show is adapted from Margaret Atwood’s 1985 novel. 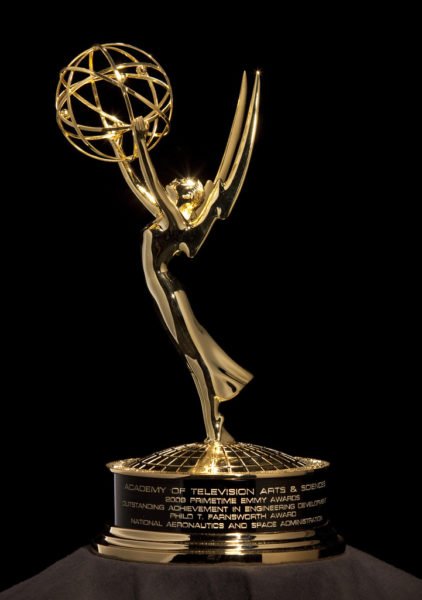 Emmys 2015: Game of Thrones Becomes First Show to Win Most Emmy Awards in One Night

Accepting the award for best limited series, Nicole Kidman said: “The power of television has astounded us, you allowed us into your living rooms… but as much as the show has the entertainment value, it’s about the issues.”

The series, which deals with themes such as domestic violence, also stars Reese Witherspoon, who encouraged the TV industry to provide “more great roles for women”.

Julia Louis-Dreyfus won best actress in a comedy series for Veep for the sixth year in a row – breaking the record for the most Emmys won by a lead actor for the same role.

Veep, which was created by Armando Iannucci, also won one of the night’s top prizes for best comedy series.

Sterling K. Brown’s win for best lead actor in a drama series marked the first time an African-American actor had won in the category in almost 20 years.

He continued his acceptance speech in the press room after being cut off on the main stage.

Host Stephen Colbert and several of the winners made political references on stage.

“At long last, Mr. President, here is your Emmy,” said Alec Baldwin as he collected his prize for supporting actor in a comedy series, mocking Donald Trump’s frustration at never having won for The Apprentice.

Several high-profile series failed to live up to expectations, including Westworld and Stranger Things, which both went home empty-handed.

Game of Thrones, a big winner at previous Emmys, was not eligible this year because episodes from its last series didn’t air during the Emmys eligibility window.

Likewise, Twin Peaks will have to wait until 2018 to be considered.