A leaked partial tax return of President Donald Trump shows that he paid $38 million in tax on more than $150 million income in 2005.

The two pages of tax return, revealed by MSNBC, also showed Donald Trump wrote off $103 million in losses. It gave no details on income sources.

The White House said publishing the tax return was against the law.

Donald Trump refused to release his tax returns during the election campaign, breaking with a long-held tradition.

The president has said he is under audit by tax authorities and that his lawyers advise against releasing tax returns.

The IRS has a policy not to confirm whether or not individuals are under audit, but says it does not stop anyone from releasing their own returns.

Donald Trump’s critics have created numerous petitions calling for their full release, including one that gathered over a million signatures.

Correspondents say that, despite the lack of detail in the 2005 documents, the leak is still significant because so little is known about Donald Trump’s tax affairs and the new information could increase pressure on him to release more.

The two pages show that President Trump paid $5.3 million in federal income tax and an extra $31 million in what is called alternative minimum tax (AMT). 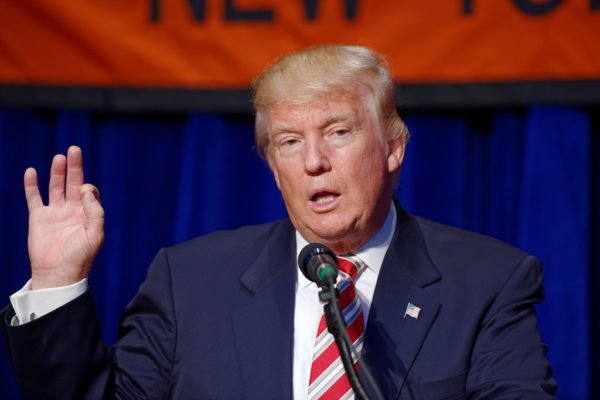 AMT was set up nearly 50 years ago to stop the wealthiest people from using deductions and loopholes to avoid paying taxes. Donald Trump has called for it to be abolished.

The $38 million bill was an effective tax rate of about 24%, higher than the average American citizen would pay but below the 27.4% averaged by higher-earning taxpayers.

Although leaking federal tax returns is a criminal offence, MSNBC host Rachel Maddow argued that the network was exercising its right to freedom of speech under the First Amendment to the US Constitution to publish information in the public interest.

Journalist David Cay Johnston, interviewed on MSNBC, said he had received the documents in the post from an anonymous source.

In a statement issued before the broadcast, the White House said: “You know you are desperate for ratings when you are willing to violate the law to push a story about two pages of tax returns from over a decade ago.”

The statement said President Trump had a responsibility to pay no more tax than was legally required.

Every presidential candidate since 1976 has released their tax returns although there is no legal requirement to do so.

In October 2016, the New York Times revealed parts of Donald Trump’s 1995 tax returns that showed losses of $916 million. The newspaper said this could have affected his returns for up to 18 subsequent years, allowing him to legally avoid paying federal income taxes.

The forms disclosed on March 14 do not say whether the $103 million write-down was connected to the 1995 losses.