Several pictures of Kellyanne Conway kneeling on the couch in the Oval Office with her shoes on have sparked a social media storm.

The senior White House adviser is seen clutching her phone as President Donald Trump poses with leaders of historically black colleges and universities.

She was taking her own photos at the time. 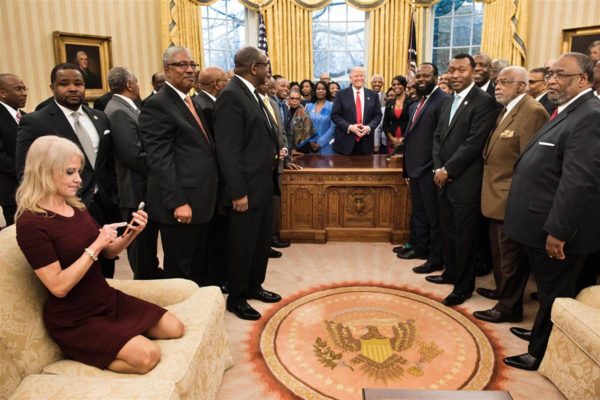 One user tweeted on the social media site: “That’s no way to act in the People’s Oval Office.”

“Think of all the great people who sat on that couch and put your feet down,” wrote another.

The pictures led some to question Kellyanne Conway’s body language, suggesting that she was not taking the meeting on February 27 seriously. 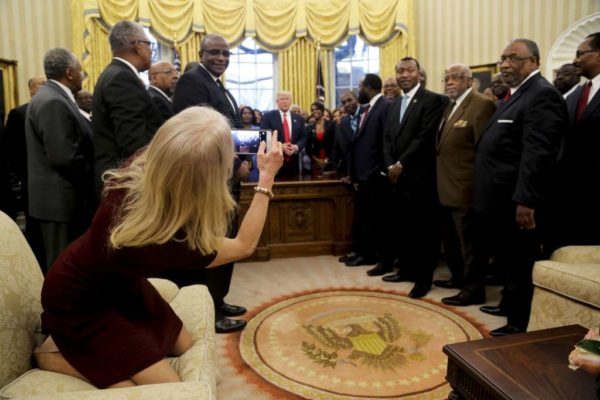 Others downplayed the excitement, indicating that it was all a bit of a storm in a teacup.

The images of Kellyanne Conway also drew comparisons to a photograph taken in 2013 showing then President Barack Obama with a foot up on the Oval Office desk.

President Trump was meeting leaders of historically black colleges and universities to discuss his administration’s support for the schools, including contracts and grants.

Kellyanne Conway is no stranger to controversy.

Earlier this month she was criticized after citing a “massacre” which never happened while defending Donald Trump’s controversial immigration ban.

Kellyanne Conway’s recent promotion of products linked to Ivanka Trump led to calls for an investigation into whether she had violated ethics rules.