Elor Azaria, the Israeli soldier who killed a wounded Palestinian attacker in a high-profile case that split opinion across Israel, has been jailed for 18 months.

He was found guilty of manslaughter for shooting dead 21-year-old Abdul Fatah al-Sharif in Hebron, in the occupied West Bank, in March 2016.

Elor Azaria had told a colleague that Abdul Fatah al-Sharif, who had stabbed another soldier, “deserved to die”.

Military chiefs condemned his actions, but others praised them.

The case fuelled debate in Israel over when and how soldiers are entitled to use lethal force against attackers.

The shooting occurred amid a wave of attacks by Palestinians that had killed 29 Israelis over the preceding five months.

The offence carries a sentence of up to 20 years, though prosecutors had called for Elor Azaria to be jailed for between 3 and 5 years. 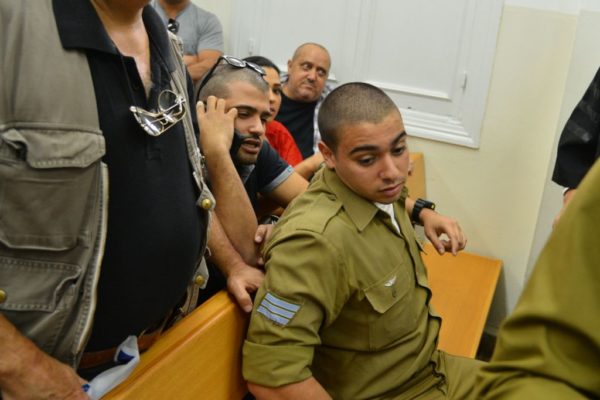 Elor Azaria was also ordered demoted from his rank of sergeant.

Judge Maya Heller said his crime was mitigated by the fact that it was his first conviction, that it had occurred in an active military scene and that there had been no clear orders as to how he was supposed to act.

She noted that Elor Azaria had not displayed any remorse for what he had done.

A spokesman for the Palestinian Authority criticized the sentence as lenient, calling it a “green light to the occupation army to continue its crimes”, AFP reported.

Israel’s PM Benjamin Netanyahu has previously said he would support any decision to pardon Elor Azaria.

The killing received widespread coverage after footage of the incident, filmed on a mobile phone, was shown on Israeli news programs.

The footage showed Elor Azaria cocking his gun and firing at the head of Abdul Fatah al-Sharif, who was lying apparently incapacitated on the ground after being shot and wounded following the stabbing attack.

The court which convicted Elor Azaria dismissed his claim that he had acted out of fear that Abdul Fatah al-Sharif might have been wearing an explosive vest.