Five people have been killed after a light plane crashed into a shopping center in Melbourne, Australia.

The victims are four US citizens and the Australian pilot.

According to police, the plane appeared to have had a “catastrophic engine failure” shortly after taking off from the small Essendon Airport.

Despite the destruction, no-one was killed or injured at the shopping center.

Victoria’s Premier Daniel Andrews said it was the worst civilian aviation accident in the state in 30 years.

The Australian Transport Safety Bureau said it would investigate how the twin-engine Beechcraft B200 King Air crashed soon after 09:00 local time on February 21. 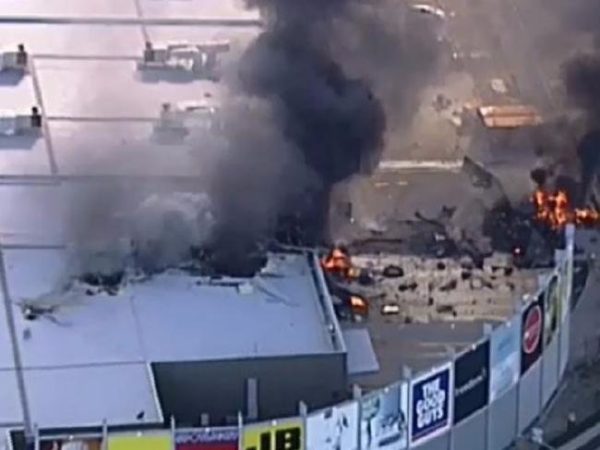 A spokeswoman for Spotlight, a retailer in the complex, said the plane crashed into its rear warehouse but all staff were safe.

The Direct Factory Outlets center was not open to the public at the time.

“Looking at the fireball, it is incredibly lucky that no-one was at the back of those stores or in the car park of the stores, that no-one was even hurt,” said Victoria Police Assistant Commissioner Stephen Leane.

The US embassy has confirmed that four passengers on the plane, bound for Tasmania’s King Island, were US citizens.

Local media named the pilot as 63-year-old Max Quartermain. He had decades of flying experience and an “impeccable safety record”, according to the website of charter company Corporate and Leisure Aviation, which he owned with his wife.

The airport has been closed, but the city’s main hubs for commercial air traffic – Melbourne Airport and Avalon Airport – remain open.

The crash sent black smoke high into the air and ignited a blaze that required more than 60 firefighters to bring under control.

Police shut the adjacent Tullamarine Freeway after witnesses spotted debris from the plane including a wheel on the road. The area around the shops was evacuated, and three nearby schools were closed.

Video showed thick smoke and fire at the wreckage scene.

Australia’s PM Malcolm Turnbull said he was “deeply saddened” as he offered condolences to the families of the victims.