Toshiba has announced it will sell a slice of its smartphone memory chip unit.

The company needs to raise funds after revealing a heavy one-off loss at its US nuclear power business.

Toshiba will unveil the size of the write-down next month, but some estimate it could be around $6 billion.

It is widely reported that 20% of the chip business will be sold off, and Toshiba is expected to confirm this later.

Toshiba’s chip business is the second biggest in the world after Samsung’s, and has been valued at between $9 billion and $13 billion.

The company says it hopes to have struck a deal by the end of March. 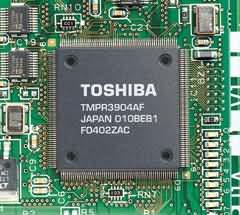 Reports suggest Canon, Western Digital and the Development Bank of Japan could be potential buyers, though analysts expect Toshiba may be forced to accept a cut-price offer given its financial woes are well-publicized.

Shares in Toshiba have fallen more than 45% since late December, when it revealed the problems in its nuclear arm, linked to a deal done by US subsidiary, Westinghouse Electric.

Westinghouse bought a nuclear construction and services business from Chicago Bridge & Iron (CB&I) in 2015. But assets that it took on are likely to be worth less than initially thought, and there is also a dispute about payments that are due.

Toshiba has also reported “inefficiencies” in the labor force at CB&I, along with other factors driving up costs.

The damage to its finances threatens to undo efforts to recover from 2015 revelations that profits had been overstated for seven years. The accounting scandal led to the resignation of the company’s chief executive.

Since then, Toshiba has been trying to slim down the business, including selling its profitable medical devices operation to Canon in 2016.