Donald Trump has accused the media of dishonestly reporting the size of the crowd at his inauguration on January 20.

The president said the crowd had reached the Washington monument as he spoke at the US Capitol, despite photographic evidence to the contrary.

Later, his White House press secretary said it had been “the largest audience to ever see an inauguration, period”.

On January 21, millions of demonstrators in the US and around the globe protested against Donald Trump’s new administration.

The largest rally was in Washington, which city officials estimated to be more than 500,000-strong. By most estimates, it surpassed the crowd at January 20 inauguration.

The protest’s aim was mainly to highlight women’s rights, which activists believe to be under threat from the new administration.

Donald Trump did not mention the protests during a bridge-building visit to the CIA headquarters in Langley, Virginia, on January 21 but instead turned on the press.

The president accused the media of inventing a feud between him and the intelligence community and he called reporters “among the most dishonest human beings on earth”.

Donald Trump said TV footage and photos of his inauguration had painted an inaccurate picture. 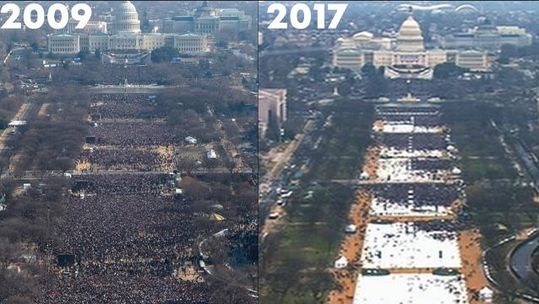 “It looked like a million and a half people” there on Friday, he said, rubbishing media reports that there were as few as 250,000 people.

Donald Trump also said the crowd extended all the way back to the Washington Monument, although this claim is contradicted by aerial shots from the day.

“This was the largest audience ever to witness an inauguration, period. Both in person and around the globe,” Sean Spicer said in a fiery statement.

“These attempts to lessen the enthusiasm about the inauguration are shameful and wrong.”

In addition to the photographic evidence, Washington’s Metro system said trips were down on previous inaugurations.

According to TV views were less than Barack Obama’s and Ronald Reagan’s first inaugurations.

Sean Spicer, who did not take questions, added: “There’s been a lot of talk in the media about the responsibility to hold Donald Trump accountable, and I’m here to tell you it goes two ways. We’re going to hold the press accountable as well.”

Outgoing CIA chief John Brennan accused Donald Trump of “a despicable display of self-aggrandizement” over the statement at Langley.

“Brennan says that Trump should be ashamed of himself.”

Last week, John Brennan called on Donald Trump to be more “disciplined” in what he said and warned him not to underestimate Russian intentions.

Donald Trump’s visit had sought to mend relations with the intelligence community after weeks of doubting their conclusions about alleged Russian interference into the US election.

The president said the media had invented a feud between them, although in a recent row over a leaked dossier that alleged the Kremlin held compromising material on him, he had likened the actions of intelligence agencies to Nazi Germany.

Donald Trump tweeted: “Intelligence agencies should never have allowed this fake news to <<leak>> into the public. One last shot at me. Are we living in Nazi Germany?”