Donald Trump has been sworn in as the 45th US president after taking over from President Barack Obama in a ceremony at the Capitol Hill.

The new president has delivered his inaugural address before leading a parade to the White House.

He has painted a bleak picture of a broken country speaking of abandoned factories, crime and a failed education system as problems of the past, pledging that his presidency would bring about change.

President Trump said on the steps of the Capitol: “This American carnage stops right here and stops right now.”

Thousands of Donald Trump supporters travelled across the country to witness the occasion from the National Mall.

The moment marks the end of an improbable journey for the billionaire after a campaign marked by controversy.

Shortly after the ceremony Donald Trump was seen signing his first official actions as the 45th president.

He sent his Cabinet nominations to the Senate as well as a signed a proclamation for a national day of patriotism, according to Press Secretary Sean Spicer.

In his inaugural address, President Trump promised to be the voice of the “forgotten people”, ignored by Washington politicians.

Today, he said, was “the day the people became rulers of this nation again”. 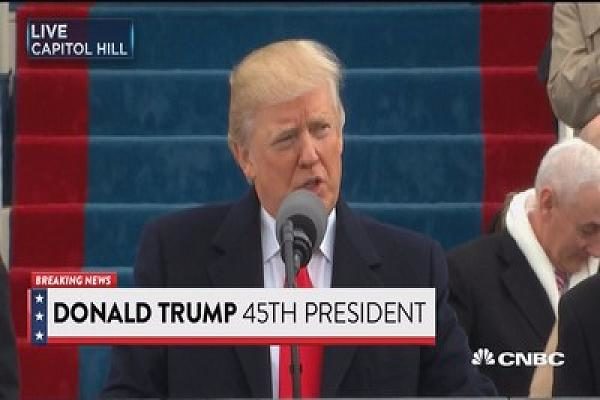 “I will fight for you with every breath left in my body and I will never ever let you down,” said President Trump after Chief Justice John Roberts administered the oath.

“America will start winning again, winning like never before.

Barack and Michelle Obama held hands as they boarded a military helicopter that took them to Joint Base Andrews in Maryland.

Barack Obama delivered remarks to staff and supporters before he and his wife flew to Palm Springs, California, for vacation.

He told a crowd they “proved the power of hope” and that “this isn’t a period, it’s a comma in the continuing story of building America”.

The historic moment drew congratulation messages from dignitaries around the world including Pope Francis, who said he was praying Donald Trump’s decisions would be guided by the “rich spiritual and ethical values” that have shaped America’s history.

Hillary Clinton, who lost to Donald Trump in a dramatic upset in November’s election, attended the ceremony with her husband, former President Bill Clinton.

Former presidents and first ladies, including George W. Bush and his wife Laura as well as Jimmy Carter, were in attendance.

The only absences were 92-year-old George Bush Senior, who is in hospital being treated for respiratory problems, and his wife Barbara.

Members of Congress were also in attendance, although more than 50 House Democrats had refused to attend the ceremony in protest.

Donald Trump takes power at a time when the country appears to be deeply divided. He enters the presidency with historically low approval ratings.

He has vowed to roll back many of his predecessor’s policies, including repealing Barack Obama’s signature health care law and building a wall along the US-Mexico border.

Authorities arrested nearly 100 people protesting against the inauguration, according to the Metropolitan Police Department.

Many were apprehended for “vandalism and destruction of property”, said spokesman Lieutenant Sean Conboy.

Earlier, about 150 protesters dressed in black marched through Washington, smashing windows and rolling rubbish bins into the street to form blockades.

The Women’s March on Washington on Saturday – for racial and gender equality, and other issues perceived to be under threat from Mr Trump’s administration – is expected to draw about 200,000 people.

Meanwhile in New York, thousands of people attended a rally where dozens of celebrities and politicians voiced their concerns about the president-elect.

Some spectators had waited for hours, although crowd numbers seemed to be lower than some other recent inaugurations.