According to state media, two hundred firefighters had battled the blaze in the 17-storey Plasco building for several hours before it fell to the ground in a matter of seconds.

More than 200 people were also reportedly injured in the incident.

Completed in 1962, the Plasco building was once Tehran’s tallest and contained a shopping center and clothing workshops.

The fire reportedly began around 08:00AM local time on January 19, at a time when many of the shopkeepers were not inside.

Initial photos showed flames and smoke pouring out of the top floors.

Ten fire stations responded to the fire and state TV reported that dozens of firefighters were inside the building when the north wall collapsed, swiftly bringing down the whole structure. 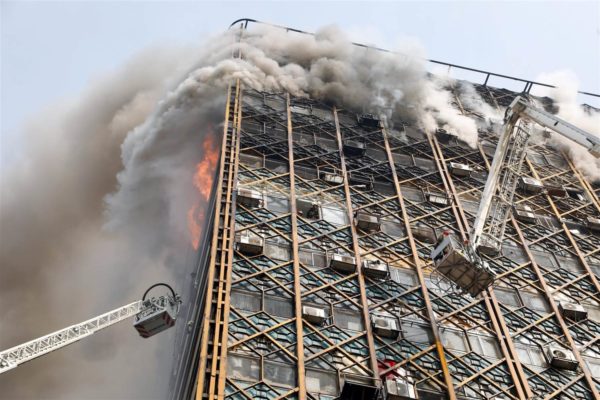 Emergency Medical Services chief Pir-Hossein Kolivand told the official Irna news agency that many firefighters were feared dead but did not give an exact figure.

The state-run English Press TV channel cited an official as saying that between 50 to 100 people were believed to have been trapped under the rubble.

He was quoted as saying by the AFP: “We had repeatedly warned the building managers about the lack of safety of the building.

“Even in the stairwells, a lot of clothing is stored and this is against safety standards. The managers didn’t pay attention to the warnings.”

The Tasnim news agency reported that the Plasco building “had caught fire in the past”.

According to Irna, police have cordoned off Jomhoori avenue, which passes by the building, as well as the nearby British and Turkish embassie.