Thirty seven people have been killed after a Turkish cargo plane flying from Hong Kong has crashed into a village in Kyrgyzstan.

The Boeing 747 operated by ACT Airlines crashed as it was about to land in fog at Manas airport, 15 miles north of the capital, Bishkek.

At least 15 buildings were destroyed in the village outside the airport, with a number of children among the dead.

Flight TK6491 was to have stopped at Manas en route to Istanbul in Turkey.

Kyrgyz authorities have declared a day of mourning for January 17.

ACT is an Istanbul-based airline operating under the name MyCargo. The aircraft is believed to have been about 14 years old. 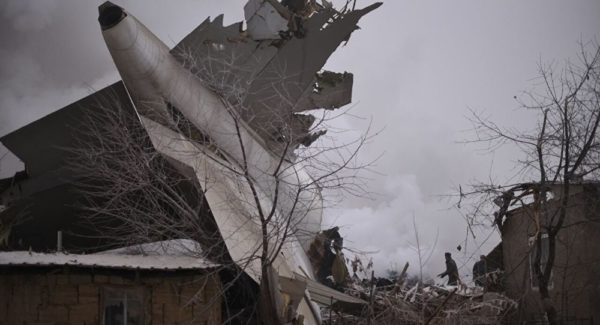 Deputy PM Muhammetkaly Abulgaziev said on state TV: “According to preliminary information, the plane crashed due to a pilot error.”

At least 15 people, including six children, were injured, the health ministry said.

According to ACT, the plane had no record of technical faults and had not encountered problems during its flight.

One of its two flight recorders has been recovered, the Kyrgyz prime minister’s office said.

Turkish President Recep Tayyip Erdogan called his Kyrgyz counterpart, Almazbek Atambayev, on January 16 to express his sadness at the loss of life.