A number of Democrats have called for Donald Trump’s naming of his son-in-law, Jared Kushner, as a top adviser to be reviewed over concerns of nepotism and conflict of interest.

The group wants the Justice Department and Office of Government Ethics to scrutinize “legal issues” related to the appointment of Jared Kushner.

His lawyer says the post does not breach anti-nepotism laws.

The millionaire will step down as boss of his family’s real estate business and publisher of the New York Observer newspaper in order to comply with ethics laws, his lawyer Jamie Gorelick said.

Donald Trump will be inaugurated as the 45th US president on January 20.

Several of his cabinet picks have business interests that will be scrutinized at confirmation hearings taking place this week.

Donald Trump’s selection for attorney general, Alabama Sen. Jeff Sessions, is the first to face Senate confirmation hearings on January 10. He was turned down for a federal judgeship in 1986 because of alleged racist remarks.

Unlike cabinet positions, advisers are considered part of White House staff and do not require approval from Congress.

Jared Kushner is a vastly wealthy property developer and publisher who played an influential role in Donald Trump’s presidential campaign and has been included in key meetings with foreign leaders during the transition period. 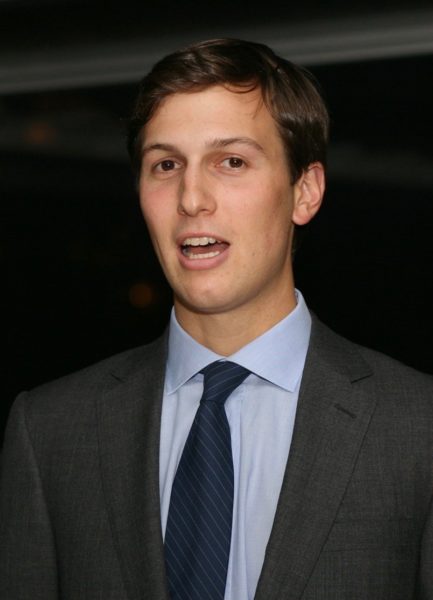 An Orthodox Jew whose grandparents were Holocaust survivors, Jared Kushner was raised in Livingston, New Jersey, and went on to study sociology at Harvard.

His father, also a property mogul, was jailed for tax evasion, illegal campaign contributions and witness tampering in 2005 by Chris Christie – then the US attorney for New Jersey.

Jared Kushner is said to have played a key role in the ousting of Chris Christie, by then New Jersey governor, from Donald Trump’s presidential campaign team last year.

In his new role, Jared Kushner will initially focus on trade policy and the Middle East, according to officials from the transition team.

The nepotism rule, signed into law by President Lyndon Johnson in 1967, prevents public officials from promoting a relative “to a civilian position in the agency in which he is serving or over which he exercises jurisdiction or control”.

It is thought to have been prompted by JFK’s appointment of brother Robert to the post of attorney general in 1960.

The law would stop a president from giving a cabinet job to a relative – but it is unclear whether it applies to positions in the White House team.

Those that say it does not point to President Bill Clinton’s appointment of First Lady Hillary Clinton as chair of his health care reforms package in 1993.

In their letter, the Democratic lawmakers, all members of the House Judiciary Committee, argue that a “strong case” can be made that the 1967 federal anti-nepotism statute applies to staff working in the White House, a position rejected by Donald Trump’s team.

They also raise questions about how, even with significant divestment, Jared Kushner could completely avoid conflicts of interest in his White House role.

Concerns have been raised about his relationships with foreign investors.

The New York Times reported on January 7 that Jared Kushner met the head of an insurance group with links to the Chinese government over development plans for his skyscraper, 666 Fifth Avenue, just days after Donald Trump won the presidential election. His spokeswoman, quoted by the paper, said the timing of the meeting was a coincidence and he had already decided to sell his stake in the building.

As his appointment as special adviser was announced, Jared Kushner’s lawyer, Jamie Gorelick, said he was committed to complying with federal ethics laws and had consulted with the Office of Government Ethics about what steps to take.

She added that he would not be paid for the advisory role.

Jared Kushner’s wife, Ivanka Trump, will step down from executive roles at the Trump Organization as well as her own fashion brands.

However, she will not be taking an official role in her father’s government – for now at least – and instead will focus on raising her children.

Reports said last week that Ivanka Trump and Jared Kushner and their children would be moving into a $5.5 million home in Washington DC’s wealthy Kalorama neighborhood – at least for some time.

The Obama family is due to be moving to the same area after leaving the White House.

Meanwhile, Donald Trump announced in November that his wife, Melania, would be staying in New York – at least initially – after his inauguration to allow their youngest son, Barron, to finish the school year.