ISIS has claimed it was behind the New Year attack on Istanbul’s Reina club that killed 39 people in Turkey.

The Islamist group said in a statement it was carried out by “a heroic soldier”.

At least 600 revelers were celebrating in the early hours of January 1 at Reina club when the gunman began firing indiscriminately.

ISIS has been blamed for recent attacks in Turkey, which is taking military action against the group in neighboring Syria.

The group has already been linked to at least two attacks in Turkey in 2016. 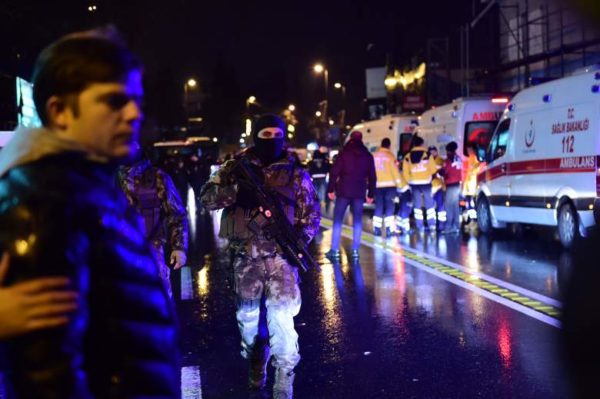 The ISIS statement accused Turkey of shedding the blood of Muslims through “its air strikes and mortar attacks” in Syria.

More details of the nightclub attack have been emerging. The attacker, who fired up to 180 bullets, arrived by taxi before rushing through the entrance with a long-barreled gun he had taken from the boot of the car.

The gunman fired randomly at people in an assault lasting seven minutes, starting with a security guard and a travel agent near the entrance. Both were killed.

The attacker is reported to have removed his overcoat before fleeing during the chaos.

Turkish media reports quote police sources as saying he may have been from Uzbekistan or Kyrgyzstan.

A manhunt is under way, Interior Minister Suleyman Soylu confirmed, saying: “We hope the attacker will be captured soon.”

“They are trying to… demoralize our people and destabilize our country,” he said.

Turkey suffered a bloody 2016 with a series of attacks, some carried out by Kurdish militants.

However, a day before the ISIS claim, the banned Kurdistan Workers’ Party (PKK) was quick to distance itself from Reina club attack, saying it would “never target innocent civilians”.

At least 25 of those killed were foreign, according to local media, among them citizens from Israel, Russia, France, Tunisia, Lebanon, India, Belgium, Jordan and Saudi Arabia.

Security guard Fatih Cakmak was among the first to die.

At least 69 people are being treated in hospital, officials said, with three in a serious condition.

Reina club, which sits on the banks of the Bosphorus, is one of Istanbul’s most fashionable venues – popular with foreigners and often frequented by singers and sports stars.