The Tunisian opened fire on police who asked him for ID during a routine patrol in the Sesto San Giovanni area on December 23.

According to German authorities, fingerprints they provided have confirmed the dead man is Anis Amri. They are trying to find out if he had accomplices.

When Italian police stopped the suspect, who was on foot, at 03:00AM local time, he “immediately drew out a gun” and shot at the two policemen, Italian Interior Minister Marco Minniti said.

Officer Cristian Movio was injured in the shoulder but his injuries are not life-threatening.

His junior colleague, Luca Scata, who had been in the police for just nine months, was the one who fired the shot which killed Anis Amri.

German officials found Anis Amri’s fingerprints inside the truck that was used in December 19 attack. 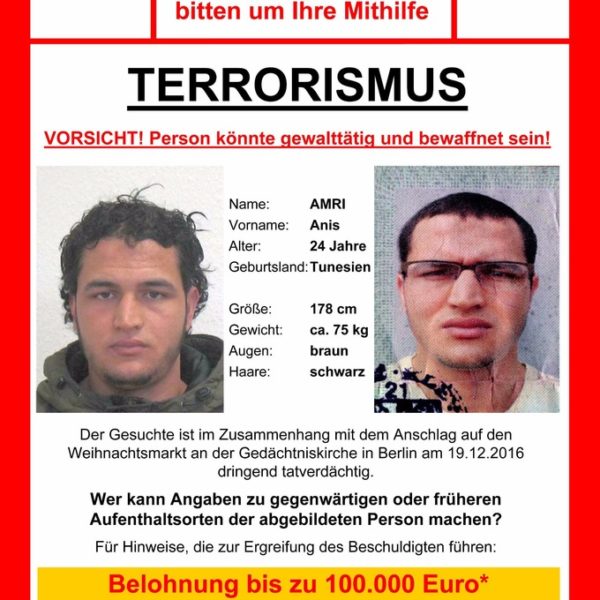 Federal prosecutor Peter Frank said the focus of the criminal investigation into the killings now was to establish whether Anis Amri had had a network of supporters who helped him to plan and carry out the attack or to flee.

Investigators are also trying to establish whether the gun used in the shooting in Milan is the same weapon used to kill the Polish driver of the truck, who was found dead with stab and gun wounds in the cab.

The attack took place at the Breitscheidplatz Christmas market near the Kaiser Wilhelm Memorial Church in the west of the German capital, Berlin.

According to the Italian news agency Ansa, Anis Amri had traveled by train from France to Turin, and then taken another train to Milan.

From the central station Anis Amri traveled on to Sesto San Giovanni, a working-class area.

Anis Amri, 24, had served a prison sentence in Italy after being convicted of vandalism, threats and theft in 2011.

The Tunisian was known to Italian authorities for his violent behavior while imprisoned.

After his release Anis Amri was asked to leave the country. He later arrived in Germany where he applied for asylum in April 2016.

His application was rejected by the German authorities but they were unable to deport him to Tunisia because he had no valid identification papers.

Anis Amri was named as a suspect in the Berlin attack by German federal prosecutors, and a reward of up to €100,000 ($104,000) was offered for information leading to his arrest.

The German authorities issued an alert for Anis Amri on December 21 after immigration documents identifying him were found in the cab of the lorry used in the deadly attack.

Anis Amri’s family had urged him to give himself up, and on December 23 his mother criticized Italian and German security officials for not sending him back to Tunisia, where the rest of the family still live, in an interview with German broadcaster Deutsche Welle.

A spokesman for Germany’s interior ministry would not comment on reports in the German media that Anis Amri had been filmed at a mosque in Berlin in the hours after the attack.

Separately, police arrested two people in the German city of Oberhausen on suspicion of planning an attack on a shopping centre.