At least nine people have been killed and many more injured after a truck ploughed into a busy Christmas market in the heart of Berlin, police say.

A suspicious person has been arrested nearby, while what police describe as a passenger was found dead, police say.

Chancellor Angela Merkel has been in contact with the interior minister and the mayor of Berlin, her spokesman, Steffen Seibert, tweeted.

“We are in mourning for the dead and hope that the many injured can get help,” he added. 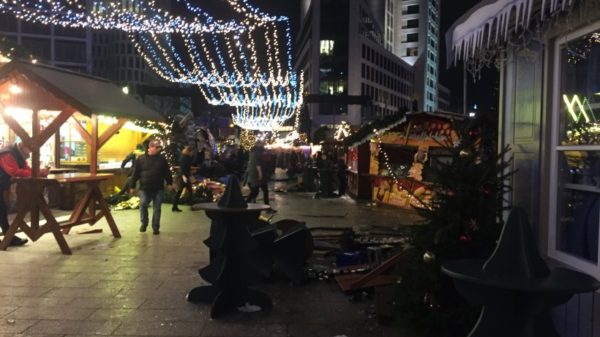 As emergency vehicles filled the area, Berlin police said they had “no indications of further dangerous situations in the city near #Breitscheidplatz”.

They also appealed to the public to avoid the area and stay at home.

Facebook has set up a Safety Check page for people affected to let their loved ones know they are safe.

According to the DPA news agency, p

Police believe the truck drove 250ft through the market area during the incident, which occurred at 20:14 local time.

Images of the truck show it was registered in neighboring Poland and Polish media are suggesting it may have been stolen earlier.

The Polish haulage company which uses the vehicle has reportedly been unable to get in touch with the original driver, a Polish national, since 16:00.

The Berliner Zeitung reports that police have set up a meeting point for relatives at the scene.

A photographer for the DPA news agency said that armed police were at an entrance to the nearby zoo.

The market is situated at the foot of the Kaiser Wilhelm memorial church, which was kept as a bombed-out ruin after World War Two.

The Breitscheidplatz incident evoked memories of the truck attack on Bastille Day crowds in Nice,, France on July 14, when 86 people were killed. That attack was claimed by ISIS.