Thirteen soldiers have been killed and other 56 wounded in a car bomb attack in the city of Kayseri, Turkey.

The explosion destroyed a bus carrying soldiers visiting a local market in the city. An army spokesman said civilians may also have been injured.

No group has admitted carrying out the attack, but Turkish officials say it bears the hallmarks of the outlawed Kurdistan Workers Party (PKK).

The new attack comes a week after 44 people were killed in a PKK attack in Istanbul. 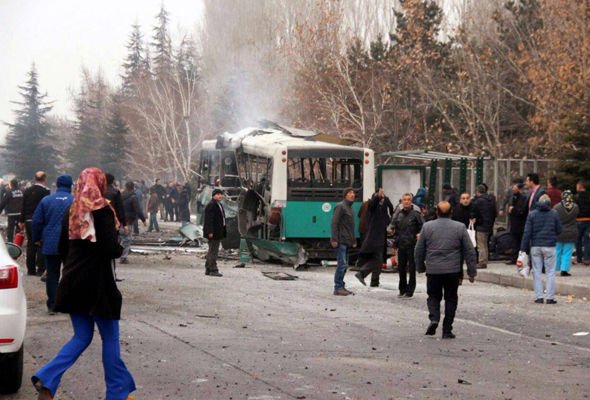 Regional governor Suleyman Kamci said the explosion in Kayseri, a usually calm industrial hub in Central Anatolia, was carried out by a suicide bomber parked next to the bus near the entrance to Erciyes University. The soldiers were said to be on leave from a nearby military base.

Seven people have been arrested in connection with the attack.

Images from the scene showed the bus reduced to a smoldering wreck with a massive hole punched in one side.

Turkey’s Deputy PM Numan Kurtulmu said the materials used were similar to those used in Istanbul.

“All indications at present point to the PKK,” he said.

President Tayyip Erdogan said that Kurdish militants were attempting to “trip up Turkey, cut its strength and have it focus its energy and forces elsewhere”.

The country has suffered a series of fatal bombings in 2016 at the hands of both the Kurdish militants and jihadists.

The HDP condemned Kayseri blast and called for an end to “the politics, tone and language that creates tension, polarization, hostility, chaos and conflict”.

The government imposed a temporary black-out on media coverage in the wake of the Kayseri blast.

According to the Associated Press, an instruction from the prime minister’s office urged the media to refrain from publishing anything that may cause “fear in the public, panic and disorder and which may serve the aims of terrorist organizations”.