Moscow’s NKVD restaurant drew social media protests and the letters on the big sign with its name outside have been removed.

The name of the restaurant is a chilling echo of the Stalin-era communist terror. The NKVD was the forerunner of the Soviet KGB secret police. In the 1930s and 1940s the NKVD arrested millions of people and many were executed. 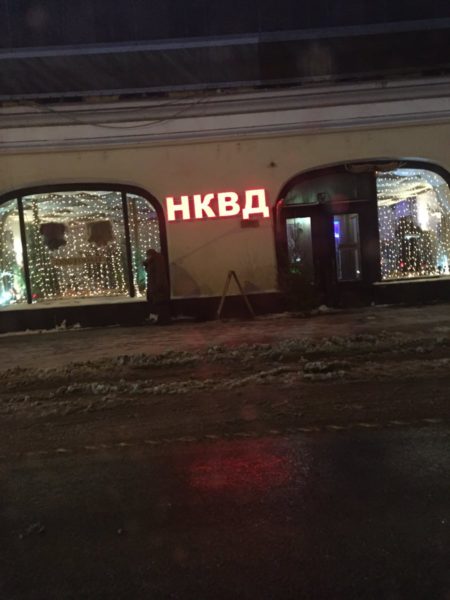 NKVD restaurant is not far from the Kremlin and the old secret police headquarters, on Ostozhenka Street.

The controversy over the “NKVD” name featured in Russian Vesti TV news – one of the main broadcasts on the state-controlled Rossiya 24 channel.

However, some Russians voiced alarm at what appeared to be more whitewashing of history and an insult to Stalin’s many victims.

Public displays of Stalin portraits were taboo in the last decades of the Soviet Union – but they have reappeared during President Vladimir Putin era.

Vladimir Putin has emphasized the sacrifices made by the USSR in World War Two. But he has also acknowledged that Joseph Stalin’s security apparatus committed terrible crimes.

Leonid Gozman, of the Russian civil society organization, Perspektiva Foundation, said “it’s a rehabilitation of our country’s most tragic episodes.

“I can’t imagine a <<Gestapo>> restaurant in Munich or Berlin… A lot of our people consider the NKVD to have been a criminal organization. Many people’s relatives suffered or died [in that period].”