Over two hundreds people have been arrested in Turkey for acting on behalf of the outlawed Kurdistan Workers Party (PKK), the interior ministry says.

Among those 235  arrested are officials from the main Kurdish People’s Democratic Party (HDP).

Meanwhile, Austria says that talks with Turkey over membership of the EU should be suspended. 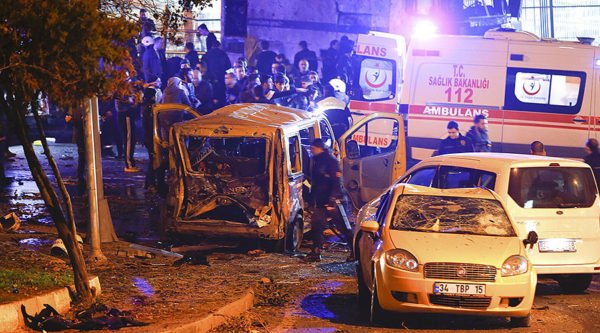 A statement from the interior ministry says the operation covered 11 provinces across Turkey from the northwest to the southeast, and targeted people suspected of “spreading terror group propaganda”.

It is not clear whether December 12 arrests were directly related to the bomb attacks.

Speaking in parliament, Turkish Health Minister Recep Akdag said most of the 44 people killed on December 10 were policemen.

The Kurdish militant group TAK, an offshoot of the PKK, said in a statement it had carried out the attack.

President Recep Tayyip Erdogan told reporters on December 11 that Turkey would fight “the scourge of terrorism to the end”, and promised that the attackers would pay a “heavy price”.

Speaking ahead of a meeting with his EU counterparts in Brussels, Austrian Foreign Minister Sebastian Kurz said that Europe could no longer ignore President Recep Tayyip Erdogan’s crackdown on the opposition.